Mari once again provides sniper fire cover for Asuka during the battle against Evangelion 13 in Terminal Dogma, as well as providing her with spare batteries and a container for the 12th Angel within Evangelion Mark.06, as Asuka tries to stop Shinji from pulling the Spears. She also interacts with Rei, advising her to escape from Mark.09 before it turns into a Vessel of the Adams. When Rei is unresponsive, Mari expresses her opinion that Rei's "original" was nicer. Mari recognizes immediately that the awakened Evangelion 13 is really a surviving Adams as Fourth Impact begins. She is assigned by Asuka to attack Evangelion 13, but fails to reach it before Kaworu Nagisa dies in a failed attempt to stop the Impact. In order to stop Fourth Impact entirely, Mari forcibly ejects Shinji, telling him to help Asuka and get to know the world. Unit-08 is later picked up by the AAA Wunder along with the wreckage of Unit-02.

Her quarters with Asuka on the Wunder are also a sort of isolation chamber. This is referenced as such in concept art for the 10th Khara anniversary exposition." Asuka and Mari are referred to as "dangerous persons" that must kept apart from the crew, further estranging the former from humanity..

In Evangelion: 3.0 + 1.0 Thrice Upon a Time, Mari is part of Operation 0706 to restore part of Paris and recover a large supply cache. She is able to defeat the Nerv attackers, at the cost of Unit-08's legs. Mari meets Asuka and Shinji when the Wunder comes to pick them up. Upon greeting Asuka, she teases her about her unresolved feelings for Shinji, "I thought you didn't care about boys his age", to which Asuka responds that Shinji "needs a mother, not a girlfriend". Before their mission in Antartica, Mari re-introduces herself to Shinji. When Shinji expresses he understands why Asuka was angry at him, Asuka recognizes he has grown up, and Asuka confesses she did like him in the past. Mari congratulates Shinji, and asks Asuka if she feels better, to which she affirms.

During the final battle against Nerv, Mari pilots the repaired Eva-08 supporting Asuka against a wave of Nerv Evas. She remains puzzled at Gendo's plans. When Asuka is absorbed by Eva-13 and Shinji is preparing to pilot Unit 01 again, Mari takes Eva-08 in an "overlapping state" and merges it with Eva-09, 10, 11, and 12, and uses it to fight a new horde of Nerv Evas. She tells Shinji to once again "save the Princess". Mari then meets Fuyutsuki, referring to him as "Fuyutsuki-sensei", further alluding to her familiarity, and he calls her "Maria of Iscariot".

Attempting to stop Instrumentality, Mari sacrifices her combined Evangelion. During Gendo's Additional Impact, Mari is shown to have been a friend of Yui Ikari and Gendo in college and helped get them together. When Shinji talks with Asuka and expresses his feelings, Mari bids farewell to Asuka. Shinji is sitting on the beach when Unit-08γ emerges from the ocean. Mari takes her glasses off and comments "Just barely on time". Shinji gets up and runs in her direction. Inside the ocean, she thanks Unit 8+0+10+11+12 while Unit-08 and Mari thanks the Final Evangelion. She emerges from the ocean and puts her glasses back, saying "I have kept you waiting, Shinji".

In the final scene of the movie, Asuka, Rei and Kaworu, as adults, are in the other platform of Ube-Shinkawa Station train station in the city of Ube, Yamaguchi Prefecture, Japan. An adult Shinji is sitting on a bench with his bag wearing a suit, when Mari covers his eyes and asks who is it. Shinji replies, referencing their earlier encounter on the Wunder. Mari, also an adult, is wearing a pink blazer. Mari walks up Shinji and approaches his neck facing his front and smells his neck: "The smell of an adult". Shinji initially looks annoyed but replies confidently, to Mari's surprise, and she removes his DSS Choker. She offers her hand and says, "Well then, lets go, Shinji-kun." and Shinji agrees, leaving the main gate and guiding him to the new world.[3]

Mari is named after the post-World War Two destroyer Makinami (itself named after a World War Two era destroyer Makinami (巻波, "overflowing waves")) and the British aircraft carrier HMS Illustrious. The two names may be intended to, as in Asuka's case, represent a mixed heritage: here, British and Japanese (at minimum). Strictly speaking, neither "Illustrious" or "Makinami" (written as 真希波, "noble true wave") are real surnames[4], although this may be nothing more than a creative liberty.

Her first name was originally unveiled in the Nintendo DS Petite Eva@School game.[5] Later, one of the official movie posters included a "teaser" for her full name: showing the "Mari" part, and substituting the remaining characters with asterisks ("*** Mari *******")[6]. Mari's entire name was at last revealed in a revised version of the poster included with the first issue of Eva Extra[7]. Before her actual name surfaced, Mari was known exclusively among fans as "Glasses Girl" (among Japanese fans, めがねのこ, megane no ko, meaning the same thing). In English, Asuka calls her "Four-Eyed Crony".

In the extra chapter of the manga, it is revealed that Yui Ikari and Mari were classmates, and the two became close friends as students under Fuyutsuki. Yoshiyuki Sadamoto has, however, clarified in an interview that the extra chapter and Mari's inclusion in it should not be seen as a part of neither the manga nor the Rebuild series' storyline, stating that it was something he purely did for "fun", comparing the chapter to "fanservice".[8] 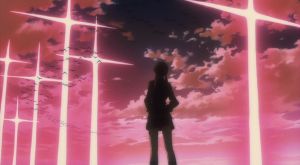 Mari's character has a tumultuous development history, with Chief Director Anno knowing little more of his intent for her than that he wanted her to "destroy Eva". Director Kazuya Tsurumaki ended up shouldering much of the responsibility for Mari, and Yoji Enokido was also recruited during a writer's retreat to provide an outsider's opinion. Much of the disagreement revolved around how (and how much) to integrate Mari into the preexisting Eva framework, and the nature of her personality. At one point, Mari was to do little more than appear in the pre-title Third Angel sequence and to later observe the Tenth Angel's destructive power (the latter idea shown in the first movie's trailer for Ha). Various ideas were tested in early script drafts and storyboards wherein Mari took over part of another character's role from NGE, eventually abandoned due to the desire to give Mari her own identity. Enokido's suggestion was that Mari should provide a rival for Asuka who ultimately usurps her. Enokido wanted to go so far as to have Mari become the main pilot for Unit 02, say anta baka to Shinji and even kiss him, though this was eventually discarded by Anno and other writers. In another concept for Mari that was never incorporated into the finished film, she would have owned numerous cats and had tattoos of them on her arms and legs. The fact that Mari occasionally punctuates her speech with "nya" (the Japanese equivalent of "meow") may be a reference to this abandoned idea.