Evangelion: 3.0 + 1.0: Thrice Upon a Time is the title for the fourth and final film in the Rebuild of Evangelion movie series, formerly known by the working title Evangelion: Final. It was believed to be released in Japan alongside the third film, Evangelion 3.0, at an unspecified date. Previously, the name had been changed to what could be interpreted as either the symbol for "End" or "Repeat" in sheet music.[1].

Unlike the three previous movies, the title is rendered in Katakana as "Evangelion" in the same manner as the TV series. The previous three movies had Katakana that spelled "Wevangeliwon". Speculation by fans based on the Jo-Ha-Kyu structure of Japanese drama suggests that Final will incorporate the fourth and fifth acts of the Japanese drama cycle, depicting a long journey and coming to a quick conclusion[2]. Alternatively, the series may be following the Kishotenketsu[3] narrative pattern which concludes in the fourth arc. Whether or not the movie actually follows either pattern of Japanese drama remains to be seen.

In September 2014, the title of the final film was revealed to be "Evangelion 3.0 + 1.0", based on a title card shown at the end of the TV screening of Evangelion 3.0, followed by the subsequent update of the main Evangelion site with the new title.[4] As of this edit, it is unclear whether either of the previously known titles will be used in connection with this film or with any subsequent work related to the series.

On December 31st, 2011 the Japanese website was updated to show a 2013 release date[5], but that has been removed when the site was updated after Evangelion 3.0's release [6]. The website no longer features any tentative date and none have been announced[7].

At the 2014 Tokyo Film Festival Anno joked that the final film may be released 4-6 years after Evangelion 3.0[8].

Actual news on the film's production has been hard to come by. As of late, various miscellaneous projects have been done, including two animated shorts that may or may not pertain to the film's own details as well as the end of Sadamoto's manga adaption. However, the film itself has seen no details except for the news that Utada Hikaru, who has been the musical artist for Rebuild's credit themes, would be returning in 2015 from her hiatus to write the final film's credits theme. The source also indicated that the film would release in autumn/winter 2015, but this claim was then refuted by the source, who then stated that no official announcement had been made.[9] As of the new title announcement, this is the only solid news (or any news at all) that has been released.

On July 19th, 2016 Anno directly apologized to the fans of Evangelion. He stated "To all the Evangelion fans, I’m really, really keeping you all waiting, I am truly sorry." Anno then went on to say he felt "trapped" while making Evangelion: 3.0 You Can (Not) Redo, saying he couldn't recharge. “Up until then, after doing the third entry Evangelion: 3.0 You Can (Not) Redo, I thought I wasn’t going to make any more,” After being offered the job to work on Godzilla Resurgence, he stated “At that time, I went into talks with Toho, and it saved me. I think this is how I’m able to keep making Evangelion. However, since it is a fact that I’m making everyone wait, I deeply apologize for that.” [10]

On July 20th 2018, the official Evangelion website was updated to reflect a 2020 theatrical release.[11]

On April 17th 2020, the official Evangelion website was updated to announced that the release date was being delayed by an unspecified amount of time due to the COVID-19 pandemic[15][16][17]. The announcement of the delay was accompanied by an updated staff/credits list, the release of the official poster in both Japanese and English and the reveal of the English title "Thrice Upon a Time" and the additional message "Bye-bye, all of EVANGELION"[18]. Hideaki Anno posted a letter to healthcare workers expressing gratitude for fighting the disease, apologizing to fans for the added delay due to the unprecedented situation and encouraging all readers to persevere[19].

On December 17, 2020, it was announced that all shooting and editing work for the movie was complete. This was followed by tweets from Studio Khara announcing that the movie had been screened to staff as well as select non-staff members, with the warning that spoilers on social media were a possibility by this point. [22][23]

On January 14, 2021, Studio Khara announced that the movie was to be indefinitely delayed again due to the worsening COVID-19 pandemic in Japan, and that the scheduled release of the soundtrack on February 10 would not take place. [25][26] 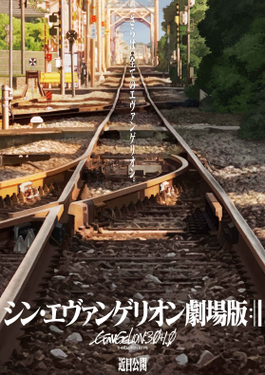 On July 6, 2019, the event Operation 0706 took place, the film's opening scene (having the production code "Avant 1") was simulcast on screens in Paris, France (Japan Expo) and throughout Japan, following a live event in Paris with Yoko Takahashi and Megumi Ogata. This was followed up later at other locations such as Los Angeles, CA's Anime Expo. A phone application was made available days before to drum up hype for the event, wherein the user was asked to choose between Team Nerv or Team Wille. After the event, their choice affected when they would have access to limited-access freebies: the four Shiro Sagisu pieces that debuted during Op0706, and the first three New Theatrical films.

On April 17, 2020, the announcement of the delay in the release date was accompanied by the revelation of the movie poster and the English title "Thrice Upon a Time". The poster features an image of Shinji in the distant background, walking down branching train tracks in bright sunlight. The location appears to be Ube-Shinkawa station, the main train station in the city of Ube, Yamaguchi Province, where Hideaki Anno was born.

On October 15, 2020, the announcement of the new release date was accompanied by the revelation of a new trailer, showing additional imagery of the characters, locations and Evangelions.

On December 9, 2020, the official Evangelion website announced that the theme song for the movie would be "One Last Kiss", performed by Hikaru Utada [27].

On December 23, 2020, the official Twitter announced that 3.0 + 1.0 would be screened simultaneously with Evangelion 3.333 in back-to-back midnight IMAX screenings in Tokyo, Osaka, Nagoya, Fukuoka and Sapporo, with the official website having a list of double-screenings for both movies. [28]

The film begins with Wille stopping in Paris, France, which much like the outskirts of former Tokyo-3 has been converted into core material. A team descends from the Wunder -- comprised of Ritsuko, Maya, three of Maya's male underlings, and Mari in Eva-08 -- and lands on top of a mysterious black pillar. Ritsuko acts as a look-out while Maya and her men connect to the black pillar via laptop into order to resume the activation of an "Anti-L System" -- something a team of Europeans had previously died while attempting. Large numbers of a never-before-seen Eva type, the aerial 44As, appear in two waves, and Mari holds them off, assisted by helmsman Sumire Nagara utilizing the Wunder's intricate "cable flight" capabilities. Once the Evas have all been defeated, two more new enemy Eva types appear from a camouflage cocoon: a 4444C unit with a positron cannon and the small army of generator-equipped Eva 44Bs that supply power to it. Cable-suspended warships equipped with ESVs are used to block the first shot, but Mari must take drastic measures to prevent the cannon from going off a second time. With Nagara's assist, Eva-08 charges the 4444C with the felled Eiffel Tower and, at the cost of Eva-08's legs, is able to twist the tower down the 4444C's gun barrel, resulting in the destruction of both it and the 44Bs.

Maya and the others successfully activate the pillar, which was actually a giant version of the sealing pillars seen in the two previous films. A radius of effect is created that pushes back the core-conversion, restoring part of the city. A large collection of E.U. Nerv storage lockers emerges from underground, filled with Eva spare parts, munitions, and components for what appears to be an upgraded model of Jet Alone. Two more teams come down in warships, and we're told that Eva-02 will be repaired and Eva-08 will be modified for "Overlap" compatibility.

The rest of the film has yet to be released and further confirmed details are scarce. The three pilots stranded in Japan will probably be rescued or otherwise reunited with Wille at some point, a plot point set up by the end of 3.0 (Asuka: "Let's go where the Lilin can pick us up")[29] and the end of 3.0+1.0 (Mari: "Wherever you are[, Puppy Boy], I'll come fetch you")[30]. Later trailers reveal, among other things, swarms of attacking enemy Evas during what appears to be another Impact event, the Black Moon in motion, a scene in zero gravity, show the presence of a second, Wunder-like vessel and feature a hand-to-hand fight between Eva-01 and Eva-13 in what looks like a restored Tokyo-3. How these plot elements connect is unclear prior to the release of the finished movie.

Short films released by khara hint at the existence of a sequence[Source needed] where Shinji, Asuka, and Rei walk from the city outskirts on through core-converted suburbs filled with Failures of Infinity, until they reach the ocean, and the first poster for the film similarly alludes to the sequence, but it's not yet known if it will finally be released in completed form in 3.0 + 1.0. A (now-deleted) character design sheet leak on the khara2 twitter account revealed that adult versions of Toji, Hikari, and Kensuke will appear in the film.[Source needed] Further details about what will happen are completely unknown and the topic of intense speculation.