Evangelion Unit-03 arrives in Japan from the United States. However, its activation experiment only continues the chain of misfortune begun with Eva-04 when it turns out to have been infected by the Thirteenth Angel. The other Evas are dispatched to ascertain the situation, and end up needing to battle the out-of-control Evangelion, even at the risk of killing its helpless pilot.

The episode begins with the transport aircraft carrying Eva-03 flying through a formation of cumulonimbus clouds. A brief, but massive spark of electricity is shown as the Eva enters the clouds.[2]

Misato prepares to leave for Nerv's second test facility at Matsushiro, and tells Shinji that she will be gone for a couple of days and has asked Kaji to look after him and Asuka for tonight. Shinji takes the opportunity to probe her for information on the things he has recently learned from Kensuke, namely the disappearance of Eva-04 along with Nerv's second branch in the US, and the rumors surrounding Eva-03's imminent arrival in Japan. Misato admits that what he has heard about the Eva-04 incident is true, and it happened when they tested the S² Engine, but assures him that Nerv Headquarters are quite safe. Shinji then tries to press her on the latter bit of information, asking her what she knows about the pilot of Eva-03. Misato finds herself unable to answer this question, leading to a tense moment of awkward silence between the two of them, which is interrupted by the door bell. Outside stands Kensuke, who begs to be chosen as the pilot of Eva-03.

In route for Matsushiro, Misato talks with Ritsuko, admitting that she didn't tell Shinji anything about the pilot because she is scared of how he will react. Ritsuko tells her that, as his guardian, she has to tell Shinji sooner or later. Misato reluctantly says she will try telling him tomorrow, but hopes that the new pilot might tell Shinji the news himself. Ritsuko says it is not very likely; the new pilot didn't take the news about his selection too well, and only asked for one thing in return for his compliance; that his sister was moved to the infirmary in Nerv Headquarters to receive medical treatment there.

Back at school Shinji and Kensuke discusses Eva-03, while Toji absentmindedly stares at the celling. Asuka arrives late, which puzzles Shinji since she left for school before him. Asuka just shoots an ireful look at Toji and spits at Shinji she doesn't want to look at him and his friends' ugly faces right now. At lunch time, Shinji and Kensuke notices to their puzzlement that Toji is absent, which is very strange. Toji, meanwhile, stands on the roof when Rei shows up to speak with him. Toji guesses that she probably knows what is going on with him, and Asuka does too, and that only leaves Shinji not being in the know. Hikari notices them talking together, and gets worried.

In Matsushiro, Misato are waiting due to a delay in transporting the Eva to Japan. The delayed flight arrives, and the Eva is readied for activation.

Back in Tokyo-3, Asuka is walking home with Hikari. Hikari notices that she normally walks home with Shinji, but Asuka replies she is not in the mood to spend time with him right now. The two of them sit for a bit to down to chat, and Asuka guesses straight away that Hikari wants to talk about her feelings for Toji. Hikari asks if things between them are that obvious, and Asuka says that everyone can tell, except Shinji, whom she dismisses as too dense to understand relationships and to how to relate to people. Hikari tells her for her worries that Toji might have something for Rei, but Asuka assures her that Rei is the only she knows who is worse than Shinji when it comes to relate to people.

In Misato's apartment, Shinji and Asuka are relaxing. Shinji decides to ask her if she knows anything about Eva-03 and its pilot. Though Asuka is surprised to realize that Shinji doesn't know yet, she pretends that she doesn't know either. Later that night, Shinji asks Kaji if he knows anything about Gendo. Kaji admits that he doesn't know too much, asking Shinji in turn why he is interested in learning about his father. Shinji says that he has learned quite a few things about Gendo, the Evas, and his mother lately and wants to know more. Kaji tells Shinji that he only believes that he has learning something, and that fully understanding other people is impossible, but that also is what makes life interesting. Shinji then catches Kaji off-guard by asking him if he also thinks that is true for him and Misato. Instead of answering directly, Kaji formulates a somewhat vague and more general response about the nature of men and women, to which Shinji responds that he doesn't understand adults.

The next morning in Matsushiro, the bilingual[3] activation begins under supervision of Ritsuko and Misato, but as soon as the entry plug with the pilot is inserted, things go dangerously wrong. Attempts to cut the power and stop the activation fail and a high energy reaction is detected inside the Eva. The 13th Angel, Bardiel reveals itself and the Angel-infected Eva roars as it sets off a huge explosion (possibly via its S² Engine). 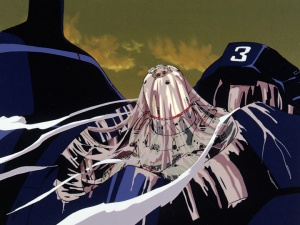 Nerv headquarters is alerted about the explosion at Matsushiro. Subsequently, an entity with Blood Type Orange is detected, which is discovered to be the infected Eva-03. Attempts to eject the entry plug are inhibited by the Angel's biomass holding it back. With communications with Matsushiro being down and Misato missing in action, Gendo takes control of the operation. With Eva-03 out of control, and rejecting its commands to eject its entry plug, Gendo wastes no time in designating the infected Eva as the Thirteenth Angel and has the three remaining Evangelions sortie against it, with no choice but to fight it with the pilot held hostage.

Shinji remains ignorant of the fact that Toji is the pilot of Eva-03. Asuka is about to tell him when she is surprised and incapacitated by the infected Eva. Rei hesitates to shoot long enough for Eva-03 to detect Eva-00's presence and attack it. After pinning Eva-00 to the ground, it secretes a grayish-purple fluid that begins to infect Eva-00 through the left arm. Gendo quickly orders the arm severed with Rei still synchronized. Eva-03 goes on to fight Eva-01.

Shinji sees the trapped entry plug and refuses to fight the Eva while the pilot is still inside. The Eva's mutated arms reach out and grab Eva-01 by the neck. Gendo orders Shinji to fight, but Shinji would rather be strangled to death than risk killing Eva-03's pilot. As a result, Gendo orders the Dummy System to be activated, despite warnings from Maya that the system is still untested.

The Dummy System activates, surprising Shinji when the pressure on his neck alleviates and his control over the Eva is relinquished. With mechanical movements, Eva-01 starts to struggle against the infected Eva-03's death grip, and and soon manages to overwhelm it, grabbing Eva-03's neck in turn. Eva-01 keeps pressing until Eva-03's neck breaks leaving the infected Eva limp. Eva-01 proceeds to throw the other Eva to the ground like a rag doll, and raises its fist to smashes in the infected Eva's skull, before starting to rip off its armor and brutally dismembering it. Shinji screams for his father to stop it and makes futile attempts to control the Eva himself, but Eva-01 continues until it digs out and crushes the Entry Plug.

Misato comes to as she found among the other survivors of the explosion at Matsushiro. She is greeted by Kaji, who explains that Ritsuko is injured, but safe and that Eva-03 was destroyed by Eva-01. A sobbing, miserable Shinji speaks to Misato on the radio briefly before the pilot of Eva-03 is revealed to be still alive. Misato apologizes to Shinji for not being honest with him about the new pilot, and tries to tell him, but once again she cannot bring the words to her lips. It is rendered moot, as Shinji to his dawning horror sees an injured and unconscious Toji being extracted from Eva-03's plug. He screams in anguish.