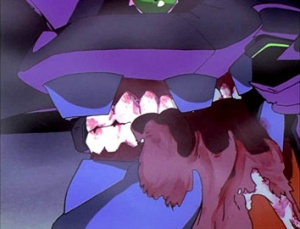 An S² (Super Solenoid) Engine (S²機関, S² Kikan) is an organ located within the core of an Angel[1] which grants it a limitless source of energy. Evangelions are not born with S² Engines[2], and are thus (normally) dependent upon energy supplied via power cable or internal battery.

A mostly-intact S² Engine is obtained from the corpse of Shamshel and sent to Germany for further study by the Third Branch's Energy Analysis Unit.[3] After the S² Engine is restored, Nerv's Second Branch in Nevada undertakes an experiment to install it into Eva-04, which results in the disappearance of the Eva, related facilities, and everything else within an 89 kilometer radius, swallowed by a Sea of Dirac[4], which implies a connection between the Super Solenoid and the Dirac Sea.

Despite the loss of the restored organ, the research data is preserved in Germany. The project continues, ultimately producing nine Mass Production Evangelions outfitted with S² Engines.[5]

A berserk Eva-01 is eventually able to obtain an S² Engine from the Angel Zeruel by physically devouring the organ and assimilating it as its own.[6] According to Seele, this acquisition makes Eva-01 an "absolute being" and the living embodiment of a god.[7] The S² Engine is said to be the only thing (aside from, presumably, a soul) required to "complete" an Eva and bring it to a level of existence equal to Adam's.[8]

An intact S² Engine is never seen in the show, although it is known to be double-helical in structure, much like DNA.[8] (Regular solenoids are shaped like spirals.)

The name comes from Dr. Katsuragi's Super Solenoid Theory.[9] He had intended to create an actual device ("S² Engine") based on the principles established with his theory and verified with Adam's power source, but this never came to be.[8][10]

Why the name "engine" was applied to what is unarguably a flesh and blood organ[6] is never stated. It appears consistent with the show's tendency to disguise the inherently biological with terms of mechanical connotation. Incidentally, written with different kanji, 器官, "kikan" does mean "organ", providing a bit of wordplay that doesn't translate into English.

"Fruit of Life" is considered an alternate term for "S² Engine"[8], and exists in contrast with Fruit of Knowledge. According to Fuyutsuki, Eva-01 had attained power equal to that of a god's upon acquiring both Fruits.[11] The Fruit of Life is a reference to Tree of Life of Genesis, the fruit of which was said to bestow immortal life.