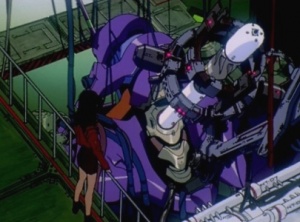 Part of the plug-salvage equipment required to re-anchor a soul into a body. Episode 20.

A soul (魂, tamashii) is, in Neon Genesis Evangelion, a necessary component of all lifeforms. It is the source of the A.T. Field.

Organisms derived from the LCL of Lilith require an A.T. Field (and hence a soul) in order to maintain physical integrity. A lifeform comprised of particle-wave matter is able to exist independent of the soul, whether it was created without one in the first place (e.g. the Evangelions and Rei clones) or if the soul was subsequently removed or lost (the Seeds and various dead Angels).

Souls originate from the Chamber of Guf, entering and leaving the world through the Doors of Guf. Souls then intersect with LCL, and by a process that Aoba calls "self-formation of LCL"[1], they form a vessel that is shaped by the soul using the AT Field/ego border/edge of the mind/self-image. The words soul, mind, self-image, psyche, heart and will seem oftentimes interchangeable in NGE.

Episode 20 reveals the most about the soul's physical properties. An electromagnetic torus is placed around the Entry Plug to re-anchored Shinji Ikari's soul within the LCL present within the plug (see image to right). Libido, Destrudo, and the temperature of the LCL also seem to be factors during the salvage of Shinji. The entire salvage of Shinji during this episode is based on the salvage attempts of Yui Ikari after the Contact Experiment, giving us one of the few windows present during the course of the show into exactly what is involved between the soul and body.

Souls appear as red orbs of light during End of Evangelion. In the Old Testament/Torah blood (and so possibly LCL) is equated with the lowest aspect of the soul in qabalah called nepesh (נפש). See Leviticus (ויקרא) xvii:xi and Deuteronomy (דברים) xii:xxiii.

As this term is so closely tied to many other terms in the show the following articles are recommended reading.

Articles that have lesser relevance, but may be useful:

For a more in-depth analysis on the nature of souls, the following article may be useful: