From EvaWiki
(Redirected from Kensuke)
Jump to: navigation, search

Kensuke Aida is Shinji Ikari's classmate and friend; their mutual friend is Toji Suzuhara. As with all of Shinji's classmates, Kensuke is an Eva pilot candidate who is kept with other potential Children for his own protection. In relation to this fact, Kensuke's mother is deceased. Not much else is said about Kensuke's family life, but his father is at least alive. 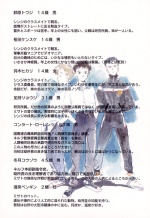 Kensuke along with Toji and Shinji. From the Proposal.

Kensuke is fascinated with military paraphernalia and warfare. He acts out elaborate war scenarios in the countryside by himself, as seen in Episode 04, and was tremendously excited to be taken aboard Over the Rainbow in Episode 08, spending most of his time there taking video of everything in sight with his camcorder, regardless of what was happening around him.

Most importantly, Kensuke wants to become an Evangelion pilot extremely badly, making him benignly jealous of Shinji (though this is also for living with the attractive Misato Katsuragi). This never seems to have affected their friendship, though Shinji is confused by Kensuke’s enthusiasm about piloting.

It seems that no experience with Children will make Kensuke change his mind. He witnessed Shinji crying in the Entry Plug after the battle with Shamshel, and knew that Toji ended up in the hospital after being selected as Evangelion Unit-03’s pilot, yet when he found out that Shinji Ikari was leaving again after the incident, Kensuke’s phone message to Shinji, just before it was cut off, only said, "Damn! Even Toji became an Eva pilot, while I--" (Episode 19).

Kensuke often knows more about the doings of Nerv than Shinji does, and has hacked into his father’s data files to get such information on at least one occasion (Episode 06). Like the rest of the residents of Tokyo-3, Kensuke had to leave the area after the city was destroyed by the detonation of Eva 00 in Episode 23.

In the Proposal, Kensuke is depicted without his usual glasses and gives more of an impression of toughness, as opposed to the rather gentle and nerdy character shown in the Anime.

In Rebuild of Evangelion, Kensuke closely follows his original role. In Evangelion 1.0, he and Toji witness the Shamshel battle and soon become close friends with Shinji. Kensuke demonstrates extensive knowledge of Nerv's internal projects in Evangelion 2.0, talking about the Eva-04 accident and Eva-03's imminent arrival. He is last seen with Toji, Hikari and Pen-Pen, holding his video camera and cowering from missile explosions as Zeruel attacks Tokyo-3. His fate at the end of 2.0 is unknown, and there is no mention of him at all in Evangelion 3.0.

Kensuke returns in Evangelion: 3.0+1.0 as an adult, working as a self-described "jack-of-all-trades" in the survivor's village. According to Toji, it was Kensuke's "survival otaku" skills that were invaluable in helping them pull through after Third Impact, and he is treated as a valuable member of the community. He is very friendly to Shinji and has a close, almost fraternal relationship with Asuka Shikinami. She lives in his house when not in the AAA Wunder where she instead shares quarters with Mari. Asuka remains isolated from the community, as she wishes to avoid "the Lilim", calling him by the nickname "Ken-Ken", though he still refers to her only as "Shikinami". After Kensuke leaves on business, Asuka strolls around naked in his house and finds Shinji, who much to her irritation, reacts badly to her DSS Choker, still traumatized by Kaworu's death. Kensuke appears, covers Asuka, and cleans Shinji's vomit. They talk and Asuka expresses irritation at Shinji's inaction, but Kensuke defends him. Later, Kensuke finds out Shinji ran away, but before leaving to retrieve him, thanks her for feeding Shinji, to which Asuka responds: "It's not like I did it for him or anything".

Kensuke proves a supportive figure for Shinji, not unlike Kaji, telling him about how he overcame his difficulties in life and became a part of the community. He is receptive to Shinji's situation with his father, and tells him of Kaji's death and his son, named after him. While at the grave of his father, Hajime Aida, Kensuke gives Shinji advice to try to talk to and get to know his father, even if it is difficult to do so. A reminder of this advice causes Shinji to stop fighting Gendo and talk to him instead, bringing their conflict to a resolution. Later, In a flashback to Shikinami's childhood while in the Anti-Universe, she laments not having a parent to care for her and give her a pat on her head due to being a clone. Kensuke, in a costume modeled directly after Shikinami's doll, tells her it is alright and gives her the pat on the head that she desires, suggesting that he has taken a parental role.[2]

In the SIRP Manga, Kensuke's role is that of comic relief, much like most of his appearances in the original series. He is also presented as a conspiracy theorist, with "crazy ideas" about a secret society known as SEELE, NERV's goals, Human Instrumentality, etc. He remains friends with Tohji and (after a fashion) Hikari.