Kyoko Zeppelin Soryu[1] (惣流・キョウコ・ツェッペリン) is the mother of Asuka Langley Soryu. She appears in Episodes 22, 25, and 25'. Despite her limited appearances, Kyoko has a major impact on the major events found later in the series, particularly on Unit 02 and Asuka's personality.

Kyoko was a researcher involved with Project E at Gehirn's German branch. However, she served as the test subject for a Contact Experiment with Eva-02, which trapped the maternal component of her soul inside the Evangelion's core.[2] Kyoko developed a severe psychological illness as a result and needed to be institutionalized. 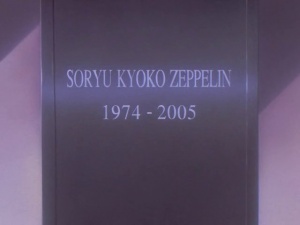 Kyoko became unable to recognize Asuka as her daughter, while rag dolls (which she alternated between treating tenderly and violently) became surrogate "Asuka-chan"s. One doll was decapitated; Asuka acquired the head and carried it with her as she watched her mother through the hospital glass. Kyoko throttled another, and, ultimately, used it to commit a "double suicide", hanging both herself and the doll-Asuka -- a spectacle the real Asuka had the misfortune of seeing.

While Kyoko was confined at the hospital, her husband (Langley) began to carry out an affair with her doctor. Little discretion was taken from the start, as the two engaged in sexual acts in the room adjacent to Kyoko's; and, by the time of the funeral, they were already married. Individuals attending Kyoko's funeral provided insinuations that Langley's infidelity was the ultimate driving force behind the suicide itself.

Although Kyoko physically died, the maternal component of her soul, at the very least, continues to survive within Eva-02. Evidence suggests that the remainder was salvaged into Eva-02 following the suicide, as well: In flashbacks to Episode 22 and Episode 25, we hear the insane Kyoko begging Asuka, "Please die with me!"

Also, in the Episode 25' scene where Asuka finds her mother within Eva-02, Kyoko repeats, "You mustn't die! You must live! You're alive!", several times. However, the familiar "Please die with me!" is mixed in twice among her inspirational words, thus suggesting that the insane Kyoko and the maternal Kyoko were incorporated together.[3]

Asuka only learns that "[Mama] was always watching over" her and "protecting" her shortly before the two of them do at last die together: Kyoko, as Eva-02, is ravaged and killed by the Mass Production Evangelions, taking Asuka with her.

Kyoko in Other Media 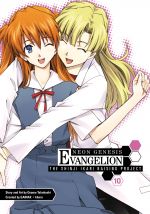 Kyoko and Asuka in the cover for Volume 10 of the English release - note the different hair color.

Kyoko appears as a character in the Shinji Ikari Raising Project manga. She has long blonde hair, unlike her anime counterpart, but similar to the manga version. Also unlike her anime self, she has a very lively personality, and is depicted as clumsy. She also constantly teases Asuka about her getting married to Shinji.

In Sadamoto's manga, Kyoko is seen more clearly in Asuka's Arael-induced flashbacks, although her design is completely different from that in the anime.

Kyoko conceived Asuka with donor sperm, but later married. During her hospitalization for mental illness, Asuka was able to gain access to her, and Kyoko throttled her, an event Asuka later reenacts with Shinji.