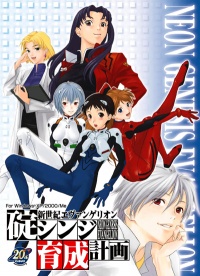 The game eventually had a spin-off manga released by the same name, similar to the Girlfriend of Steel 2 video game turned manga.