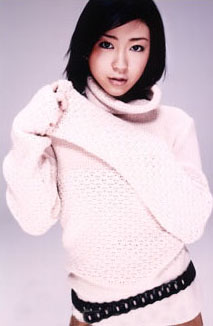 Hikaru Utada (宇多田光) is one of Japan's most popular singers and was born in New York City on January 19, 1983. A daughter of a producer (father) and musician (mother), she attended high school at the American School in Tokyo and later dropped out of Columbia University where she majored in singing in order to pursue her musical career. While she was in Tokyo, she recorded for Toshiba-EMI, releasing many singles, most notably First Love, which was also released in an album of the same title. In 2007, she released Beautiful World which was used in the Rebuild of Evangelion Evangelion 1.0: You Are (Not) Alone movie and many of its trailers. Her Fly Me to the Moon(in other words), which was released on the same single as Beautiful World, was also used in one of the trailers.