Note: This is a Rebuild-specific article. For the Third Angel from the Neon Genesis Evangelion television series, see Sachiel.

The Third Angel is an addition to the Angel pantheon introduced in Evangelion 2.0, a skeletal, vaguely dragon-like creature ultimately destroyed by Eva-05.

Also curious are the serial codes on the angel's vertebrae.

The Angel was excavated from permafrost (how it got there is not divulged) and captured by Nerv. Subsequently, it was contained in deep freeze in Bethany Base's Cocytus facility, where it was subjected to thorough experimentation and analysis, eventually reduced to nothing more than "some bones", its core, and mechanical additions. Most curious among the latter is the "pseudo entry plug"[1] dangling from the Angel's neck section.

The Third Angel's range of powers include eye-facilitated explosions and concentrated energy beams, levitation, and using its halo as a cutting device. Its original physical appearance is unknown. What remains of the skeleton are skull, spine, and insectoid limbs. The Angel has very long neck and tail sections, with a deeply curved, bulbous vertebral mid-section, held in alignment by a gold-plated brace, to which the limbs (four arms and four legs) attach. The skull possesses three mandibles and houses the core. 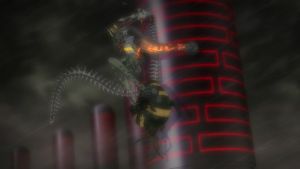 At the beginning of Eva 2.0, the Angel escapes from Cocytus, probably released by Kaji as a distraction to facilitate his escape with Nebuchadnezzar's Key. Completely untouched by the lineup of tanks waiting for it outside, it promptly enters the Styx Shaft and begins its ascent to the top of the base. The provisional Eva-05, piloted by Mari Makinami Illustrious, is deployed and quickly intercepts the Angel. The Eva's initial lance strike is dodged by the Angel, and it proceeds to the Styx Shaft's outer perimeter unfettered while Mari struggles to turn the Eva's "dead weight" around.

Using its halo, the 3rd Angel slices through the Limbo Area's outer hull and levitates to Bethany Base's rooftop, Acheron. While the Angel is scaling an Angel-sealing hex pillar, Eva-05 catches up and impales it through the mock entry plug. This disables the Angel for only a moment, and it swiftly retaliates with an optical beam to one of the Eva's legs, and soon follows up by excising the legs altogether. Mari, struggling against depleting battery power that makes her unable to synchronize with the Eva's prosthetic limbs properly, is forced to yield control of one arm to the Eva itself, and together they crush the core.

Eva-05's self-destruct activates right as the 3rd Angel dies, and both they and the top of Bethany Base go up in two giant blazing crosses.

Very little is known about the third Angel. The skeletal appearance is due to being completely stripped down during research. However, this does not explain the various mechanical additions to the Angel. Aside from the "Pseudo Entry Plug" the Angel has red and blue pipes running along the length of its spine, connecting to the Plug. It also has what appears to be an engine attached to it, and its legs appear to be artificial. It has Seele's logo painted on the front of its skull.[2] It's possible that Nerv and/or Seele were experimenting on it to try and make it capable of being piloted, hence the Entry Plug like device, possibly as the basis for a new Evangelion unit, or to test the Dummy Plug System. When Evangelion Unit-05 pierces the Entry Plug like device, the Angel momentarily stops struggling but continues the fight immediately afterwards.

No official name has yet been announced. In the meantime, the Angel is often referred to as "Tunniel" by the English-speaking fandom. The name derives from the first sightings in trailers, where little about the Angel could be discerned aside from the fact that it was in the same tunnel-like space as Eva-05 (eventually learned to be the shafts of Bethany Base).