Sahaquiel is one of two Angels that appear in Earth's orbit (the other being Arael). This Angel is truly enormous, even when compared to the other Angels: the radius of the "pupil" of its central eye alone is roughly equal to the height of an Evangelion. Sahaquiel's body is characterized by its vaguely amoeba-like shape, and the giant eye marking in its middle.

Sahaquiel is capable of using its body as a massive bomb, or of dropping pieces of itself from orbit, causing massive explosions on the ground as a reference to home in on its target. It has a very strong A.T. Field, strong enough and expansive enough to withstand over a dozen N² aerial bomb detonations almost without effect, and which can be put to offensive use as well. The A.T. Field works in conjunction with kinetic energy to enhance Sahaquiel's explosive power. In addition, the Angel can jam satellite communications and tracking systems. 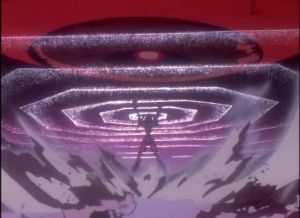 After appearing in high earth orbit, the Angel is initially attacked by over a dozen N² mines, but to absolutely no effect. Two reconnaissance satellites are sent to scan it, but are crushed by the angel's offensive AT field deployment. Sahaquiel proceeds by detaching parts of itself and dropping them onto the earth. Each subsequent part lands closer to the Geofront's location as it refines its aim.[3] Nerv believes its ultimate goal is to finally descend with its entire mass in order penetrate the Geofront and recover Adam.[4]

Misato's plan to stop the Angel has a very slim chance of success, so all the civilian population of Tokyo-3 evacuates along with the Geofront's non-essential personnel. The three Evangelions are deployed at different points to cover as much as possible of the area in which Sahaquiel may land, with orders to "catch" the Angel with their A.T. Fields before destroying it.

Eva-01 intercepts the Angel on the top of a mountain, Although its A.T. Field is able to stall the Angel's descent, the Eva is increasingly unable to handle Sahaquiel on its own as it is pushed into the turf and its arms burst open, Eva-00 and Eva-02 arrive shortly afterward, helping to push Sahaquiel back with their own A.T. Fields, and then wielding their prog knives to cut through the Angel's field and penetrate its core, respectively.

Upon death, the Angel collapses over the Evas and spontaneously explodes. The mountain is evaporated into a crater, but the Evas and their pilots are unharmed by the explosion.

Sahaquiel vs. Eva-01, from the Proposal.

The Sahaquiel presented in the Proposal is radically different from the finalized design used in the anime, comprised of little more than two long cutting ribbons attached to a disembodied core. The former design element was probably recycled into Zeruel's arms.

The "explosive" nature of the final Sahaquiel may have been co-opted from the unused "Apostolo" Turel.

The Eighth Angel in Rebuild of Evangelion appears to be based in part on Sahaquiel and appears in space but incorporates elements of Israfel and Leliel, and is altogether a very different entity.