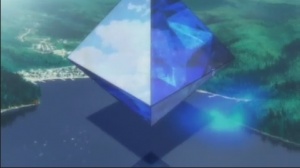 The Sixth Angel appears in Evangelion 1.0: You Are (Not) Alone, the first film in the Rebuild of Evangelion re-imagining of the original series. It is clearly based off of Ramiel and appears identical to Ramiel initially, but soon demonstrates new shapes and abilities not present in the original series. The Sixth Angel shows exceptional shapeshifting capabilities, changing its form to suit its attack or defense requirements, although its "default" form is the classic octahedron form seen with Ramiel in the TV series.

Unlike the original series Angel, the Sixth Angel manifests its drill directly as an extension of its body rather than as a seemingly-separate device. Like Ramiel, the Angel is defeated during Operation Yashima using a positron rifle powered by all of Japan's electricity.

The Sixth Angel's beam attack is much more dangerous than that of the original series Ramiel and is seen materializing directly from the core, which in at least one form is capable of splitting into multiple smaller cores to alter the beam. At its most powerful, the beam attack is capable of tearing down battleship-caliber gun emplacements and mountainsides alike. The Angel can adjust the beam's power and change form in order to do so, as seen in the initial confrontation with Eva-01. In addition, the Angel is capable of adjusting its A.T. Field so that it would not be possible for an Evangelion to neutralize it.

The Sixth Angel takes a direct hit to its core in the first positron rifle attack, only to survive and retaliate, taking its most powerful offensive form as a giant, five-pointed star. It is destroyed in the second, exploding, along with its giant drill, in a hail of blood with a rainbow.