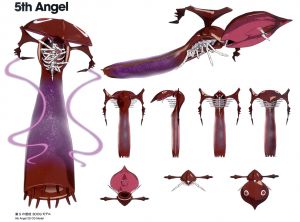 The Fifth Angel appears in the first Rebuild film, Evangelion 1.0: You Are (Not) Alone. Both the appearance and the battle against the Fifth Angel remains much the same as that against Shamshel in the original series.

The Angel has received a heavily revised design, prepared by Hideaki Anno and Yoshitoh Asari and developed into the 3D CG model used in the film. The design, while still closely resembling Shamshel from the TV show, reincorporates several elements from previously-unused concept sketches by Asari, such as more intricately segmented arms, mouth with mandibles and "fangs", and an exposed spine in the thoracic cavity to which ten legs attach.[1] Other changes include the redder color (with a glittering purple abdomen), a hollowed-out abdominal segment, and a Sachiel-like "face" near the head's attachment point. During the film, the legs are in constant motion.

The Fifth Angel, like Shamshel before it, is obscured by smoke from Eva-01's initial cannon attack and succeeds in striking back and destroying the Eva's weapon. During the course of the battle, the Eva loses the protective layers covering its hands, revealing pale humanoid skin and fingernails. The Eva is stabbed by the Angel but succeeds in killing it using its progressive knife, as in the original series.

Unlike Shamshel, when the Fifth Angel dies, the core puffs up and the whole Angel explodes in a rain of blood along with a rainbow, leaving behind only the whips impaled in Eva-01.