Evangelion Unit-05 (エヴァンゲリオン５号機, Evangerion Gogouki) is a Provisional Evangelion unit kept on standby at Bethany Base in the event of the Experimental Subject Third Angel's escape.

The Eva's full designation is "Specialized Seal-Guarding Limited Use Weapon: Artificial Human Evangelion: Local Specifications Model 05" (封印監視特化型限定兵器 人造人間エヴァンゲリオン 局地仕様 仮設５号機)[1]. It has no ranged weaponry of any sort and is completely dependent on base infrastructure.

It only saw combat once, when it intercepted and destroyed the Third Angel on top of Bethany Base. At the end of the engagement, it self-destructed. It was implied to have been sabotage, as the Angel's core was destroyed before the explosion. The pilot, Mari, survived with negligible injuries. 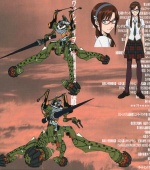 Designs for Eva-05 and pilot Mari

Eva-05, like all Evangelions, appears to be intrinsically biological in nature. However, it possesses prosthetic limbs: two arms and four legs. The unit's coloration reflects the disparity between organic and mechanical sections in the following manner: the head and body are silver, whereas the main color of the limbs is green to distinguish mechanics. (This situation is mimicked, albeit with the colors reversed, by the plugsuit of Eva-05's pilot, Mari.)

Both arms terminate in clamp-like "claws", with the right arm attached to a weapon resembling a jousting lance with intricate revolving fixtures at its base. The claws are capable of exerting enough pressure to break an Angel's core[2]. In place of normal legs, the Eva has four long mechanical appendages that terminate in wheel bases. The joints of the legs can be realigned to permit both rolling- and walking-based locomotion, although the Eva only does this in the movie to support itself on a vertical surface. Additionally, the bottom of the torso has three rocket-like thrusters that grant the Eva self-propelled flight capabilities over short distances.

The helmet bears an yellow visor and a conical projection on the forehead. There is a tall formation over the hatch for the entry plug, which is revealed to operate as an escape vehicle that launches itself and the entry plug away after the self-destruct sequence is activated. Both shoulder pylons possess areas that light up when the Eva is powered.

Eva-05's final design is slightly different from that seen in the preview, with several alterations made to the color scheme, the lance on the left arm swapped out for the "claw", and the lance's appearance refined.

Eva-05's pylons are topped with pantograph-like antennae which are used as power collectors in the tunnels of Bethany Base (animated GIF). A cable from the back of each pylon links each power collector to the same place where an umbilical cable would normally attach. Eva-05 is thus provided with external power as long as it restricts its operations to the base's interior. When the Angel leaves the base and the Eva joins pursuit, the antennae are detached by explosive bolts after which the Eva switches to internal power as usual. 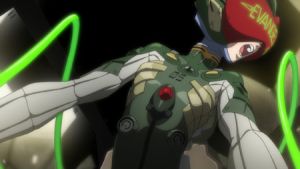 The control scheme for Eva-05 seems to deviate strikingly from traditional Eva piloting: Mari is observed to wear a large helmet-like apparatus, and her plugsuit design is also unusual. The bulky wrist pieces possess attachment sites for three green tubes each, which appear to play a role in the forced synchronization with the Eva's prosthetic limbs. The helmet does not seem to serve a distinct purpose, since the entry plug functions as a normal viewport. It is possible that the helmet is a bulkier version of the Interface Headset.