Characters from other series and franchises guest staring in Neon Genesis Evangelion in official crossovers from any media. 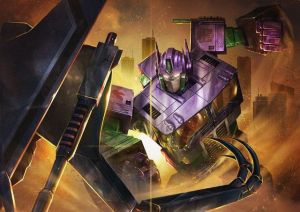 He died in the Unicron Wars most by the hands of Galvatron, his ghost traveled to Earth and possessed an Angel where he fought the Autobots and EVA-1. Eventually he was defeated when Autobots and Misato managed to help Optimus Prime-EVA defeat him by ripping out the Angel Core and his ghost was casted out into space. 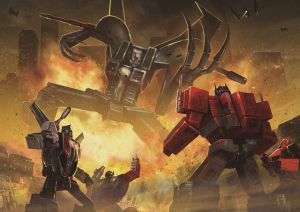 Bumblebee was one of the many Autobots on the Autobot Sky Lynx. He helped Optimus Prime deafest Angel-scream by taunting Starscream saying he can’t catch him and Starscream feel for it causing him to fall when Misato transformed Tokyo-3

Sideswipe is the one second bottom left

Sideswipe was one of the Autobots arriving in Sky Lynx to Tokyo-3 where Starscream took control of the Angel and merge with it to become Angel-scream. He would help Optimus Prime defeat Agnel-scream

Wheeljack was one of the Autobots arriving in Sky Lynx to Tokyo-3 where Starscream took control of the Angel and merge with it to become Angel-scream. Misato contacted Wheeljack with the information on Angels to help his leadership Optimus Prime to defeat the Angel Starscream. After the battle where the Autobots joined NERV to combat both Angels and Decepticons alike Wheeljack was talking to with them NERV Scientists.