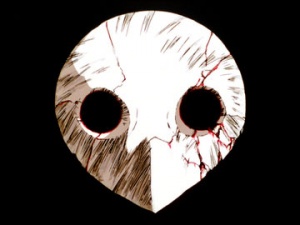 At one point in the show's production, the term "Apostolo" was going to be used as a counterpart to "shito" instead of "Angel.".[7]

Adam’s children (アダムの子供達, Adamu no kodomotachi)[8] refers to the Angels originated from the Seed of Life Adam.

Despite being segregated into separate “Angels” (Third, Fourth, etc.), Adam’s children essentially comprise a single race of humanity---one possible variation upon a theme. (The Lilin are another.) They are described as “humans who cast aside human form.” Accordingly, they appear to begin life as humanoid entities, developing embryologically in perhaps the same way as Adam or an Eva would. Going by Sandalphon, the Angels develop inside oblong objects resembling eggs, compared in the show to a chrysalis. After developing to an indeterminate point[9], the Angel's human form is “rejected.” Immediately prior to hatching (again, going by Sandalphon's precedent), the Angel undergoes a spontaneous metamorphosis into its "adult form," then emerges from its "chrysalis."[10]

In the Rebuild continuity, the Angels dissolve into a red fluid resembling blood when their cores are destroyed, and this is attributed to the collapse of their A.T. Fields.[11] This red fluid appears to be a form of LCL.

Note that with the exception of Lilith and Kaworu Nagisa, none of the Angels in the Rebuild continuity are known to have names, being known only by their ordinals. Referring to them by the names of their NGE equivalents or closest equivalents is a convention within the fandom employed for ease of communication, and they are likewise included in the list below with their corresponding NGE Angels, although the lack of names and growing divergence in visual appearance and abilities suggests the strong possibility that the Angels are not in fact, reimagined versions of the NGE designs but entirely different beings within the new continuity.

As noted above, Rebuild(NTE) Angels are listed alongside their closest NGE counterparts, even though their names in the new continuity remain unconfirmed.