Evangelions, Angels, and more traditional "mecha" (i.e., robots) located outside of the main series canon and not considered to warrant their own pages. 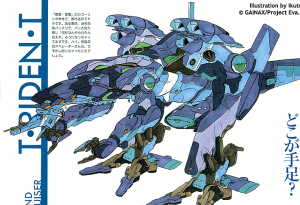 A dinosaur-like robot developed by a rival of Nerv's. Three were produced in total, each having a designated pilot around the Evangelion pilots' ages; these are Musashi Lee Strasberg, Keita Asari and Mana Kirishima. However, only two are ever seen onscreen and out of those two, only one is actually seen in action: Keita's is shown in one scene having fallen off a waterfall, and Mana's does not appear throughout. 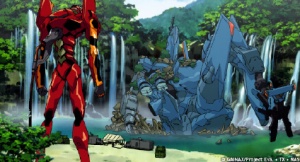 Yamashita comments on the final design:

Since the creation process was completely finished, I was finally given notification of the official names: "Shinden" and "Raiden". Because I had wanted a class designation in the original name, the "mu" of "Gamu" (the mecha's temp name) was added onto "Raiden" as "T-RIDEN-T Class Land Cruiser".

Some stuff here. I'm in the middle of this right now.