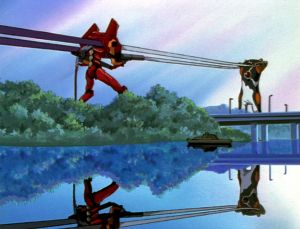 Appearing soon after the fight against the 13th Angel, Bardiel, Zeruel attacked Nerv before it had time to fully recover from the previous Angel's attack. Zeruel breached the armor layers above the Geofront at great speed, giving Nerv no time to try to engage it on the surface. Eva-02 was deployed inside of the GeoFront to engage it, but its pallet rifle and rocket fire proved ineffective. Zeruel used its arms to cut off Eva-02's arms, and soon after, its head, taking it out of battle. Soon after, Eva-00 emerged from underground, still missing an arm from the previous battle, and charged Zeruel with an N² bomb in its remaining arm. Despite shoving through the Angel's A.T. Field and the bomb making physical contact with the Angel, Zeruel emerged unharmed while Eva-00, having lost its other arm to the resultant explosion, was also incapacitated.

The Tenth Angel in Rebuild of Evangelion is based on Zeruel but is heavily redesigned and with a noticeably different role.