Cover for the PSP version

Neon Genesis Evangelions (Shinseiki Evangelion 2 Japanese: 新世紀エヴァンゲリオン2) is an Evangelion-based RPG video game, released in 2003 for PlayStation 2, and later a PSP version was released in 2006. It allows the player to follow several characters through several different versions of the plot of the series. The game itself is a combination of an RPG, a raising game, and a dating sim rolled into one. Hideaki Anno was heavily interviewed for the Classified Information files, and is also credited for the Events engine in the game. 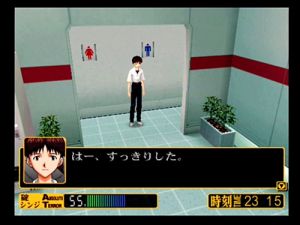 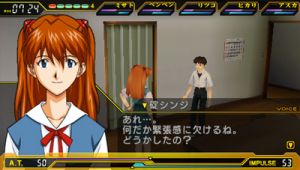 Toji visiting his little sister in the hospital.

The game's biggest attraction was its "Classified Information" (Kimitsu Jouhou) files: the game was hyped to contain the answers to some of Neon Genesis Evangelion's most perplexing mysteries, and these "answers" came in the form of unlockable data files, isolated from the actual gameplay depending on the Scenario.

Series creator Hideaki Anno was extensively interviewed by the video game developers, so the information contained within the "Classified Information" files should probably be considered "second-tier" canon. [1]

For more information, please read the full translation of the Classified Information files. 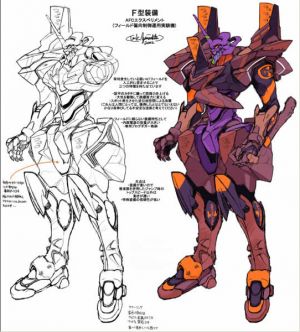 We hear about B and D Type Equipment in the series. A and C are never mentioned, and, when it came time to fabricate a merchandising gimmick for the NGE2 game, they skipped straight to F. The F Type Equipment is magenta-and-orange-colored armor that is placed on on top of EVA-01's normal purple armor. Yamashita — who designed this — was well aware of the problematic nature of the F Type Equipment's concept considering his statements in the January 2004 issue of Newtype USA[Source needed].