Gendo Ikari[2] is the Commander of Nerv, the husband of the "deceased" Yui Ikari and the emotionally distant father of Shinji Ikari. Originally known as Gendo Rokubungi, he changed his family name to Ikari after marrying Yui[3] and was then appointed as head of Gehirn and later Nerv, by Seele[4]. Along with sub-commander Kozo Fuyutsuki, Gendo is responsible for the defense of Tokyo-3 against the Angels, and for aiding in the completion of the Human Instrumentality Project. At the beginning of the series, Gendo summoned his son to Tokyo-3 in order to serve as a pilot for Eva-01.

Gendo's past is largely shrouded in mystery. The only reference he himself makes to it, namely that he "is used to being hated", hints that it was rather dark and unhappy.

While Fuyutsuki keeps his uniform properly zipped up the entire time, but Gendo just wears his uniform's jacket open. Gendo never properly wears his uniform, not even in front of the Human Instrumentality Committee, who are his superiors, or in front of the JSSDF generals who, prior to the transfer of power when the N² Mine attack fails to stop Sachiel, are technically in command. While it is indeed part of his character design (Gendo never zips up his uniform throughout the entire series), but it could also be an intentional sign that Gendo has no respect for his superiors at all.[5] 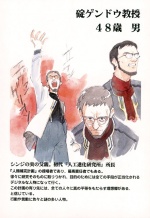 It was once rumoured that Gendo had approached Yui for nothing but her talent and her affiliation with Seele[6], but it seems that he truly loved her. Though he appears cold and distant, Gendo's primary motivation is in fact love: his goal in working on the Human Instrumentality Project is to reunite with his beloved wife, even if it means hijacking Seele’s plans[7].

Episode 26' revealed that this was not an act of callousness, but that Gendo genuinely believed that he only hurt Shinji when his son was with him, so it was better to do nothing. This, along with Adam/Kaworu’s suggestion that Gendo had just been "running away" indicates that Gendo and Shinji may have more in common than it first appeared.[8]

During the series, Gendo was also involved in a sexual relationship with Naoko Akagi and later her daughter Ritsuko Akagi. However, it seems that while both Akagi women harbored romantic feelings for Gendo, he never reciprocated the sentiment, and was merely using them for their talent as a way to further his plans. Naoko, at least, appeared to understand that Gendo would only give her his body, and that he could not forget about Yui. Both women's unbalanced natures were triggered by rejection from Gendo, resulting in Naoko's Murder of Rei 1[9], and later in Ritsuko's destruction of the Dummy Plug Plant[10] and her attempt to self destruct Nerv Headquarters[11]. In Naoko's case, the reaction was triggered by Rei 1 forcing her to realize the truth about Gendo's feelings. In Ritsuko's case, it was her realizaton that Gendo had offered her as a sacrifice to Seele in Rei's place.

Gendo was willing to have the gravely injured Rei pilot Eva-01 in Episode 01 but that could relate more to the need to do whatever is needed to succeed in a tense situation, rather than any coldness towards Rei, or as an attempt to make Shinji pilot by making him feel guilty. In several subsequent episodes, Gendo is strongly concerned with Rei Ayanami’s welfare, even going so far as to sustain severe burns to his hands as seen in Episode 05 by opening a super-heated Entry Plug hatch with his bare hands in order to rescue her after Evangelion Unit-00's berserk incident. Gendo's white gloves cover the burns he sustained and later cover something else as well. In Episode 05 he refuses to send Eva-00 to assist Shinji against Ramiel, sending Eva-01 out alone instead[12]. This concern might be read as paternal in nature, particularly given that Gendo wanted to name a daughter "Rei" (Episode 20), and that he has raised Rei since childhood. He also seems to be capable of conversing with Rei on a level that he is not capable of with Shinji, as seen in Episode 05, and Rei reciprocates. Gendo's relationship with Rei apparently degrades with Rei's third cloned copy, who openly rejects him by the End of Evangelion.

In Evangelion: 3.0 + 1.0 Thrice Upon a Time, Gendo and Fuyutsuki are steering the Black Moon towards Antarctica. Fuyutsuki wonders if Gendo made Shinji suffer the same loss as him through the original Rei. Arriving at the epicenter of Second Impact, they attempt to restart Eva 13. When Wille and the Wunder arrive, Eva 13 manages to destroy and absorb Eva 02 and Asuka with it. Gendo is in the Erbsünde ship restraining the Wunder when Misato and Ritsuko confront him. Ritsuko shoots him, but he's unaffected, thanks to using Nebuchadnezzar's Key to inject his body with "knowledge surpassing the logic of the world" and thereby transcending his humanity. Gendo explains the purpose of the Impacts, and sets about starting the Human Instrumentality Project, entering Eva-13.

Inside a Minus Space he fights Shinji inside Eva-01. Shinji appeals to Gendo to stop and talk. Gendo shows Shinji an "imaginary Evangelion", a Black Lilith predicted by the theories of Dr. Katsuragi. Misato sacrifices herself to hold back Gendo's "Additional Impact". Shinji finally succeeds in talking to Gendo inside a train. Shinji's present-day train transitions to a Showa-era train as he speaks to Gendo, and he and sees a vision of Gendo's past experiences and life. Gendo is depicted as lonely and not caring much for other people, preferring to play the piano and lead a solitary existence. Yui's love is implied to have transformed him by giving him a person whom he finally loved and cared for, and although he states that he lacked parental affection, he chose to be a parent. Yui's loss traumatized him. Gendo also flashes back to leaving Shinji on the train station, where he embraces his young son. When Shinji decides to restart the world, he is then pushed out of Eva-01 by his mother Yui, and they are embraced from behind by Gendo in Eva-13. Gendo and Yui, Eva-01 and Eva-13 together sacrifice themselves to allow Shinji to survive, reuniting both husband and wife for one last time.

In Evangelion 3.0 Gendo now wears a visor instead of his glasses. Apart from this detail and greyer hair, Gendo's appearance is largely unchanged. The visor bears some resemblance to that of Chairman Keel's in the original series. Evangelion: 3.0 + 1.0 explains the need for the visor to hide his new, nightmarish appearance: it is revealed that Gendo has used the Key of Nebuchadnezzar on himself and now has a hollow, glowing, vaguely cross-shaped void where his eyes should be.

In a FUNime interview with Kazuya Tsurumaki, English translation by Kendrix; issue 27 (3/2002), Tsurumaki states that "Ikari Gendo is not exactly popular in Japan. Many think that he is too stern with Shinji and that he generally exudes the aura of a hard, traditional, strict father. Gendo was meant to be a strong father who should have a positive influence on Shinji so that he could grow to be more confident and adult-like. Many modern fathers in Japan are “mollycoddled” which was another reason to make Ikari Gendo into a strong father." Given Gendo's cold, distant and manipulative nature towards Shinji, Tsurumaki's perspective is contradicted within the show itself. Gendo's own line in End of Evangelion stating that he stayed away from Shinji because he feared he was a negative influence, countered by Yui stating that he was merely "running away" suggests that Gendo's behavior was directly responsible for Shinji turning out the way he did, the same applying to Gendo's final words, "I'm sorry, Shinji". Gendo, rather than being the traditional image of a strong father and a positive influence, is a deconstruction of what having such a father would actually do to his children.