From EvaWiki
(Redirected from Key of Nebuchadnezzar)
Jump to: navigation, search 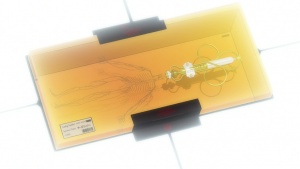 Nebuchadnezzar's Key (ネブカドネザルの鍵, Nebukadonezaru no Kagi) is an item smuggled out of Bethany Base by Ryoji Kaji during the attempted escape of the Third Angel. The key resembles a miniature human nervous system with the neck attached to a device with the appearance of an elaborate syringe. The portable safe-box containing the key bears other writing in mysterious characters that resemble a simplified version of the symbols on the Angel-sealing hex pillars.

Kaji delivers the item to Gendo Ikari, upon which the following interchange ensues:

Kaji: Now, as I promised... The stored Lost Number, kept as a backup. The guidepost towards the unification of all souls unto God.
Gendo: Yes, used to open the door to Human Instrumentality... Nebuchadnezzar's Key.[1]

The true nature of Nebuchadnezzar's Key remains unknown. Most fan speculation contends that, given the fact that the Key replaces the role of Adam's embryo in the original series, it is simply Rebuild's equivalent of a reduced Adam. It should be noted, however, that an entity equivalent to Adam in Rebuild has not been confirmed.

The key was designed by Ikuto Yamashita[2]