Ryoji[1][2] Kaji[3] is a triple agent, working for Nerv, Seele, and the Japanese Government. He and Misato Katsuragi were lovers when they were in college. Some time after their breakup, Kaji began working for Nerv in Germany, where he met Asuka Langley Soryu. Although a triple agent, he has been said to have his own agenda, to "search for the truth." Since returning to Japan, he has tried to get close to Misato once again.

Kaji's first appearance in the series is in episode 8, "Asuka Strikes," in which he accompanies Asuka from Germany to Tokyo-3 (while secretly bringing with him the Adam sample for Gendo). Upon their arrival, he enters the bridge uninvited, and when chided by the captain, casually comments to Misato that "[she] is as gallant as ever" in his typical easy-going manner. Misato seems very surprised, shocked, and displeased to see him. When Misato questions him on what he is doing here, he answers that he is accompanying Asuka and on a bussiness trip from Germany. Afterwards Kaji, Misato and the children are all dining on the ship's lunchroom together, where Kaji teasingly asks if Misato's got a boyfriend, to which she sullenly replies that it's none of his business. Kaji seems to be completely unfazed by Misato's reply, and calmly asks Shinji if he lives with Misato. When she says yes, he asks her if she "still tosses and turns in bed" with a confident smirk. He congratulates Shinji as he is now "pretty famous" as a result of his first battle against Sachiel, citing his statistics.

Grinning, he turns to Asuka and asks her opinions on Shinji, and she replies that he is boring and disappointing. Kaji once again points out that Shinji's sync ratio was well over 40% in combat, which of course only makes her mad. Later, during the battle with Gaghiel, we see Kaji observing from afar while holding a unspecified red colored object in his hands. As it turns out, he is on the phone with Gendo, who is also intent on monitoring the battle situation. Some time after finishing the phone conversation with Gendo (which he doesn't seem very pleased with), he prepares to take off in a Yak-38 custom plane saying that he's "got something to deliver." He tells Katsuragi to "take care of the rest of this" before taking off in the plane. At the very end of the episode, he is seen standing with Gendo in his office, giving him the Adam sample he somehow took from Germany's Nerv 2nd branch.

Investigation on Nerv and re-encounter

Relationship with Misato and Shinji

At first glance, Ryoji Kaji (almost exclusively addressed by his family name) appears to be one of the more well-balanced characters in the series, with an amicable, teasing manner and a wry smile. On the other hand, he is secretive about his past which gives him an air of mystery.

He has a philosophical side, one that leans towards pessimism about human interaction, but also of support for the individual's capacity to take action. In Kaji's view, people can’t really understand themselves, perhaps not even each other, and completely understanding people is impossible. This might relate to the bleaker themes of the series, though Kaji himself presents it with a slight smile.

Kaji also is negative about the relationships between the sexes, stating that there is a river dividing men and women, one deeper than the ocean. Though some might read this particular belief as an accurate observation of human nature, it still fits with the rest of Kaji’s views of human interaction in general.

Kaji has a melon patch which he enjoys taking care of, remarking on how much can be learned from nurturing something, and that it was a place where he’d like to be when he died. When Shinji visits him at the melon patch, Kaji tells him that pain teaches us kindness, and that kindness is not the same as weakness.

Kaji is killed (offscreen) at the end of Episode 21 by an unseen shooter. (Presumably a Seele agent.) 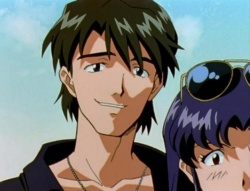 Kaji, shortly after he and Misato began dating

Kaji originally had a relationship with Misato before the series took place, but Misato broke up with Kaji after realizing how much like her father he was, though Misato’s descriptions of her father as an emotionally weak workaholic seem to be the opposite of Kaji’s personality. Perhaps there was a hidden side to Kaji, or to Dr. Katsuragi. During the course of the series, both characters meet up again, sharing wry remarks with each other and even come back together for a time, as is shown in Episode 15 onward. Kaji's relationship with Misato may have been more distant than it appeared. When Kaji became aware that rescuing Fuyutsuki from Seele would be his last assignment, he left a message on her answering machine saying, “If I ever get to see you again, I'll say the words I wasn't able to say eight years ago.” Also, they always refer to each other by their family names. Kaji also tries to get Misato to accept the decisions she made in her past, but is less than successful.

Kaji's Relationships with Other Characters

Kaji seems to flirt with Ritsuko at the beginning of Episode 09, which might confuse some first-time viewers into thinking they have a romantic past together. However, nothing revealed during the rest of the series ever implies that Kaji was seriously flirting with Ritsuko, and specifically flashbacks in Episode 21 to when Kaji, Misato, and Ritsuko were in college do not suggest anything of the kind. Kaji is merely "fooling around" here, as he was when he flirted with Maya Ibuka later in the series. (in a more overt example of the "casual guy" mildly flirtatious attitude he exudes in many other episodes of the series) quite possibly to arouse jealousy out of Misato on purpose to tease her. Kaji ignores Asuka’s infatuation with him, believing that Asuka is too young.

Shinji looks up to Kaji as a sort of mentor, and accepts behavior in him that he would disapprove of in other characters. For instance, in Episode 08 when Kaji asks him about Misato's sleeping habits, implying that Shinji and Misato might be in a sexual relationship and simultaneously implying that he is intimately familiar with these habits as well, Shinji just laughs. If anyone else asked him that same question he would probably have stuttered with embarrassment, barely able to get out a denial.

In episode 19, it's Kaji who convinces Shinji to fight, telling the temporarily ex-pilot during the attack by Zeruel that only he can pilot, and he must make that choice for himself, and consider everything so he will have no regrets, thus encouraging Shinji to return.

Kaji is seen in Evangelion 2.0 at Bethany Base along with Mari and brings Gendo an object called Nebuchadnezzar's Key. He appears to be working as a multiple agent for Nerv, Seele, and at least one other, as-yet-unknown party, and is involved with Mari and her own mysterious plans. While in the Geofront, he "fools around" with Shinji and asks him to protect Misato, since he can't do so on his own. When the abortive Third Impact is initiated, Kaji seems to understand the implications of the event and anticipates trouble from Seele. In Evangelion 3.0, Kaji's name is mentioned by Koji Takao but it is not entirely clear if he is still alive at the point.

Kaji is revealed to be deceased in Evangelion: 3.0 + 1.0 Thrice Upon a Time, however he had a child with Misato, named after him. Kensuke explains that "someone had to be sacrificed to stop Third Impact, and Kaji volunteered, with Misato's consent. During the Instrumentality sequence, it is shown he spent time with Kaworu. Kaworu has memories of having spent time with Kaji, and he criticizes Kaworu for his single-mindedness with Shinji, saying Kaworu was only looking for his own happiness, to which he agrees. When Shinji frees him, Kaji proposes to Kaworu that he go to farm with his son and Misato.

Kaji in Other Media

Unlike the anime, which is silent about Kaji's past before he met Misato, Sadamoto's Manga has a Kaji backstory chapter, in which we learn that he was in a post Second Impact gang of looters, and when captured he betrayed his friends to their deaths.

In the manga version of Kaji's death scene, he is portrayed as being already wounded, and instead of saying, "Hi, you're late!", he says "Try to aim better this time." Kaji's assailant in the manga wears white gloves and has an open collar[4], implying that Gendo might be the culprit. In the anime this scene ends with the fatal gunshot, but in the manga it continues to show Kaji's long dead gang coming for him, implied to be seeing them the same way other characters see Yui, Misato, or Ritsuko during Instrumentality and suggesting his participation in it.

The manga includes a chapter in which Kaji tells Shinji that Gendo is being backed by an ancient organization called Seele, and that Gendo and Seele both have agendas beyond defeating the Angels.