Ireul is the Eleventh Angel.

Ireul is actually a collection of microscopic-sized organisms which act in concert to form a living biological computer circuit. Ireul is capable of spreading as a physical infestation, essentially a single ever-expanding colony formed of the microscopic organisms. It can take over and control systems which it has infected, such as the simulation Eva bodies. The Angel's A.T. Field isn't a single polygonal barrier, but a moving, pulsating grid of hexagons.

The Angel is capable of rapidly adapting in response to any external threat. While the ability to alter or enhance abilities to meet with new challenges had previously been seen to a limited degree with Angels such as Sachiel, this is Ireul's primary skill: it will "evolve" to meet literally any challenge. For example, originally Ireul was harmed by Ozone (O3), so Nerv HQ's command team tried to defeat it by pumping large amounts of Ozone into the region of Nerv HQ which it had infected. While this momentarily harmed Ireul, within a matter of seconds it responded by evolving itself to adapt to these conditions, to the point that it actually thrived on Ozone.

Ireul seems to be incredibly intelligent; upon forming itself into a biological computer circuit connected to Nerv's computer network through the infected systems in the Pribnow box control room, it was capable of hacking and reprogramming two out of three Magi supercomputers within only a few minutes. It it not clear if this should be taken to mean that the Angel was truly "sapient", but it certainly seemed to know exactly what it was doing and to be capable of performing extremely complex goal-oriented tasks. 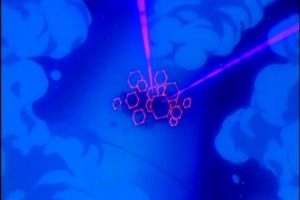 Ireul appeared in a newly-installed piece of equipment in Nerv HQ itself, in the "87th protein barrier", from which it spread by infecting surrounding material including the simulation Evangelion Unit bodies. The infected simulation Eva body closest to the command box reached up its hand to attack the personnel inside, but at the last moment Ritsuko remotely blew the arm off using implanted emergency detonators. Nerv personnel tried to stop the infection using several Polysome robot drones armed with lasers, but the attack was shown to be useless when Ireul easily blocked it with its A.T. Field. Realizing that the infection was an Angel, all personnel abandoned the Pribnow box, just as the glass windows shattered and flooded with water.

The entire Sigma Unit was quarantined, and Nerv's command staff had to decide how to defeat the Angel: the Evangelions were evacuated from the base by launching them without pilots on Gendo Ikari's orders, as if the Angel were to succeed in infecting the Evas, it would mean disaster for mankind. Thus, they had to somehow defeat the Angel without using the Evas. From the main Command Center, the Nerv command staff noticed that Ireul did not spread to areas of the Pribnow box that contained heavy water with Ozone in it. Realizing that Ireul was harmed by ozone, they remotely flooded the chamber with just that. The attempt briefly succeeded, but within a few moments Ireul rapidly adapted its own biology so that it now thrived on Ozone, and began to spread even faster.

Although the Sigma Unit of the base was evacuated, Ireul spread to infect the computers in the Pribnow box, and formed a living computer circuit. Ireul then began infiltrating Nerv HQ's Magi supercomputer system, hacking into and reprogramming them, trying to initiate the base's self-destruct mechanism. However, a simultaneous vote by all three Magi supercomputers was needed to self-destruct, and Ritsuko was briefly able to halt its advance after it compromises 2 out of 3 Magi.

Ritsuko then developed a plan to defeat Ireul: the Angel constantly evolved to overcome any threat to itself, but as a result it could be tricked into "evolving" into a dead-end, effectively programming it to kill itself. In a race to see if Ritsuko's program would work faster than Ireul's infiltration of the final Magi supercomputer, Ritsuko's kill-program prevailed and the Angel was defeated.