From EvaWiki
(Redirected from Unit-01)
Jump to: navigation, search

Eva-01 was produced by the Hakone branch of Gehirn as the Evangelion Test Type model. Unlike the other Evas, its body was generated directly from the body of Lilith, and is consequently referred to as Lilith's "offspring" or "clone."[2] On a physical level, Eva-01 has the same characteristics as an Adam-based (i.e., any other) Evangelion, so the exact nature of its relationship to Lilith remains a subject of debate.[3] Eva-01 received its soul as a result of the Contact Experiment with Yui Ikari in 2004, but was not "finished" until 2014.[4] In Episode 01 Ritsuko tells Misato that the odds of Eva Unit 01 activating are "0.000000009%. "O9 System" seems like a fitting thing to call it". This is a pun in Japanese, so the English dub inserted an extra line clarifying this, with Ritsuko explaining that "O-Nine" is a pun on "Oni", the Japanese word for "demon". Eva-01 is also designed with a traditional "Oni" as an inspiration.[5][6] 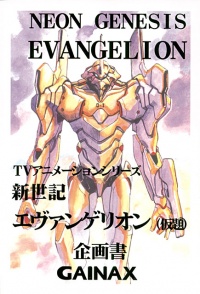