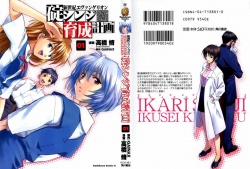 The Shinji Ikari Raising Project is an Evangelion-based manga spin-off of the video game, which was set in the original series timeline. The series was created by Takahashi Osamu, but is actually set in a universe based on the Alternate Universe seen in Episode 26. This manga is also similar in concept to another Evangelion spin-off, Girlfriend of Steel 2 which also a video game based on Shinji's alternate reality dream-world from Episode 26, which then spawned its own manga spin-off, Angelic Days.

The series ran from June 2005 until February 2016 in Shōnen Ace, which was the same magazine the Neon Genesis Evangelion manga was published in. The series has a total of eighteen Tankōbon volumes and is published in Japan by Kadokawa. The series final Tankōbon volume was published in May 2016. An English translated version of the manga is currently being published by Dark Horse Comics in the U.S., which has released all 18 of the Tankōbon volumes, with the final one being released (slightly behind schedule) in August 2018. On August 10, 2016 Dark Horse Comics released Volume 1 of the Shinji Ikari Raising Project Omnibus, which includes 3 volumes in one book.[1] The omnibus is currently on Volume 5 (Volume 13 - Volume 15 of the normal series).

The series follows Shinji, Rei and Asuka as they go through their junior high school life, with accompanying hormones, while also helping out helping out with research at the Artificial Evolution Research Lab, headed by Shinji's parents, Gendo and Yui. A secret organization, named SEELE plans to disrupt the Artificial Evolution Research Lab's experiments in order to reach its goals. SEELE's main target is the MAGI System, and Shinji, because of his parental connections to the lab. SEELE uses computer viruses (which look and act like the Angels from the series) to try and infect the MAGI system. The three children are put into a virtual reality (with plugsuits) to stop the advancing computer viruses. SEELE tries to use Kaworu Nagisa to distract Shinji from being able to sync and defend the MAGI with either Asuka or Rei.

The links to the individual volumes of the manga are listed below: 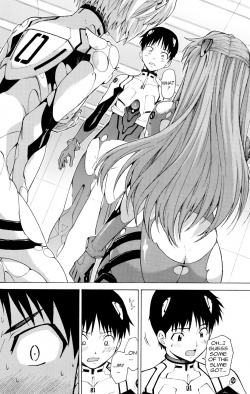 Differences Between the Original Series and Raising Project