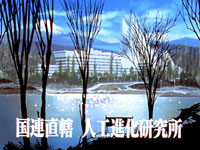 The United Nations Artificial Evolution Laboratory was a research complex located in Hakone, under the control of the U.N., built to research the mysterious "Giant of Light" (Adam) which appeared in Antarctica, and to carry out Project E: the Adam Revival Project (creation of the Evangelions). The "Artificial Evolution Laboratory" was actually the publicly used name for the U.N.'s secret research organization "Gehirn," which operated the facility. Gendo Ikari was designated as chief of the research project, and worked alongside his wife Yui Ikari, his former professor Kozo Fuyutsuki, and science chief Dr. Naoko Akagi. Essentially the Artificial Evolution Laboratory was the predecessor to the Nerv headquarters research complex, and filled its function to research and develop the Evangelion Units during the early 2000s, until Nerv HQ was completed (when the new city of Tokyo-3 was built around old Hakone).