Israfel (Arabic: إسرافيل) is the Seventh Angel, capable of splitting itself into two identical copies for simultaneous attacks.

Israfel is a vaguely humanoid Angel with the capacity to split into two "twins"[2], which are morphologically nearly identical to the single-body form apart from size and coloration: the twin designated Alpha (甲, Kou) is gold, and Beta (乙, Otsu) is silver. The twins are roughly the same size as an Evangelion, while the single body is noticeably larger. Even when completely independent of each other, both twins act in synchronization.

The face on Israfel's single-body form is shaped like a blue and red Yin-Yang symbol, with two eyes that are capable of blinking. Both twins have a gray plate with three eyes in a triangular configuration, which are capable of firing energy blasts. The single-body form has only one core, while each of the twins has its own core. Both the bodies can rejoin spontaneously, although the two cores take longer to fuse. 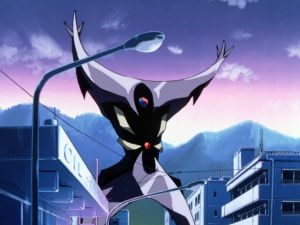 Israfel moments before it is forced to split in two

When Asuka cleaves Israfel completely in half it does not bleed at all, or appear to possess internal organs of any kind other than the core. Its insides are composed of a uniform pink fleshy material.

Of all Angels to use energy attacks, Israfel's attack is the weakest, setting off somewhat small explosions and leaving nothing more than a large crater in an ordinary armor plate. In comparison, Sachiel and Zeruel can breach the Geofront with their cruciform explosions, Ramiel can melt down an Eva's frontal armor in mere seconds and sustain the beam indefinitely, and Zeruel's beam attack blasted off Eva-01's chest armor in one shot.

Israfel is similarly weak on the defensive side as well, taking severe damage from an N2 depth charge and taking days to regenerate, when Sachiel regenerated within a few hours and grew a second face almost immediately after being hit. Also, Zeruel took no damage at all from an N2 weapon explosion in direct contact, and over a dozen N2 weapons were used against Sahaquiel to no effect.

Israfel first appeared off the Kii peninsula of Japan, which is fairly far away from Tokyo-3, being located a bit south of Osaka. However, after Israfel's first battle in which it defeats Eva 01 and Eva 02, Eva 01 is described as being sunk two kilometers from Suruga Bay, which is thus where the battle must have taken place. Suruga Bay is south of Tokyo-3, thus instead of approaching Tokyo-3 from the east like Sachiel, Shamshel, and Ramiel did, Israfel advanced from the coast to the south. However, on its final approach to the city, Israfel is said to pass through the Gora defense line.

Israfel was confronted by Eva-01 and Eva-02 immediately upon making landfall. Eva-01 provided covering rifle fire while Eva-02 charged at the Angel with a Sonic Glaive. The Angel did not display any offensive or defensive action and was cleaved in half by Eva-02. However, the two halves converted into twins, which acted in concert to defeat the two Evangelions (off-screen).

The JSSDF reacted to the defeat of the Evangelions by dropping an N2 depth charge on the Angel, causing severe tissue damage and forcing the Angel to regenerate for several days. In the meantime, both pilots were rescued and their Evas were recovered, while Nerv came up with a plan to destroy the Angel.

Once regenerated, the Angel approached Tokyo-3 and breached the final line at Goura[3], at which point both Evangelions and supporting UN units attacked it in a synchronized attack choreographed to music, forcing the Angel to repeatedly combine and recombine before forcing it into an appropriate position to strike. Both Evas drove into the cores of the two twins, which had yet to fuse together in the larger body, and forced the Angel into a hillside, where it self-destructed.

In the manga version, the singular Israfel possesses two cores, arranged vertically. Also, after it initially splits into Alpha and Beta, it never appears again as a merged entity.