From EvaWiki
(Redirected from Evangelion Unit-06)
Jump to: navigation, search

Evangelion Mark.06 is an Evangelion unit that first appears in unfinished form in Evangelion 1.0 and is sortied in the next film, piloted by Kaworu Nagisa. 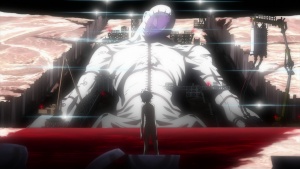 Mark.06 under construction at Tabgha Base

Mark.06 was constructed at Nerv's lunar 7th Branch, Tabgha Base. It initially appears unfinished, with its body covered in a rubbery white material[2], and a purple mask bearing the mark of Seele and two stylized "crying eyes"[3] covering its face. The morphology of the head and neck is very similar to Lilith, although the more defined body, along with what appears to be a core visible beneath the fabric, is closer to a normal Evangelion. An IV-like device labeled "BTB" is connected to the Eva's left arm.

Later, the white cover is removed and the Eva undergoes the process of outfitting. The exposed skin on the head is dark gray. The mask remains affixed to the face, but the part over the eyes has been cut away. What looks like a temporary covering is held over the eyes as the helmet is readied for application, as though to avoid "gazing upon the face of God"[4].

During their reconnaissance to Tabgha Base, Gendo and Fuyutsuki observe that the Eva's construction process is unusual (though it isn't specified how), and that Seele have constructed it in secret to advance their own hidden agenda according to Dead Sea Scrolls Apocrypha. Keel Lorenz refers to the Mark.06 as "the true Evangelion", to play a role in fulfilling the covenant with Lilith. Fuyutsuki takes this to mean that Seele "want to create a real god, not just false ones".[5]

The final armored Mark.06 is a deep blue with yellow trim. The two-horned helmet, which bears a strong resemblance to Eva-01's, has a red visor covering the eye holes.[6] The entry plug appears to be designed to provide a noticeably higher field-of-vision for the pilot. The Eva can levitate while bearing an Angelic halo while under pilot control, which -- in addition to the dialogue between Seele, Gendo, and Fuyutsuki -- hints at extremely potent capabilities. Mark.06 lacks an outlet for an external power source[7], implying an internal source of motive power.

The unit is eventually modified into an "autonomous type", though whether that means the use of a dummy plug, or something else entirely, is unknown.

Mark.06 is secretly sortied from the Moon as the 10th Angel appears outside Tokyo-3. Later, Mark.06 strikes Eva-01 from the air with the Spear of Cassius, putting an end to Near Third Impact.

Mark.06's subsequent history is vague. In Evangelion 3.0, we discover that Mark.06 has been sealed within Central Dogma for fourteen years. The Eva unit is several times its original size, completely white, and merged at the hips with Lilith's neck stub. It is impaled through the chest (and core, presumably) on a Spear of Longinus, and its hands are wrapped around the Spear, though whether it was impaling itself or trying to pull the Spear out is unknown. Of Mark.06, Kaworu says from within Evangelion 13, "Remodeled into an autonomous type, exploitation by the Lilin brought the unit to this state of ruin."

Once freed from the Spear, Mark.06 regains its original colors and shrinks somewhat (although not back to normal Eva size), and it begins to rotate in midair as if possessed. The presence of the Twelfth Angel -- which Asuka is surprised is still alive -- is detected inside the unit, and visible filling the visor with glistening particles of light. Mark.09 decapitates Mark.06, freeing the Angel, and leaving behind nothing more than a husk. 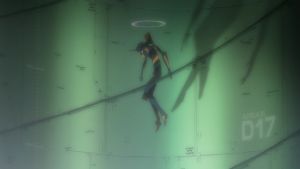 Mark.06's journey to Central Dogma was shown in the preview for Eva 3.0, and is one of the few preview items that can reliably be said to have occurred. The preview says that Mark.06 "descends to Dogma" and shows it levitating at a casual pace down what appears to be the Main Shaft. The accompanying caption, "(KEEP OUT: LILITH PRESERVATION SITE: ACCESS STRICTLY RESTRICTED)", indicates that Mark.06's target is probably Lilith. However, its ultimate intent is a matter for speculation.

Mark.06 is frequently suspected of being based on one of the Adams. In the first two films, we see 06 being outfitted at a Nerv "excavation site" at Mare Tranquilitatis, situated along a giant "blood stain". An excised storyboard from 2.0 shows that a geyser of "blood" emanated from the South Pole during Second Impact and hit the Moon. This explains not only the stain, but the presence of Mark.06 and the Spear of Cassius at the site: in other words, they are an Adams and its Spear, carried by the geyser to the Moon.

Mark.06's state as of 3.0 is a matter of some difficulty. It is possible that Seele were attempting to advance their covenant with Lilith ahead of schedule and use Mark.06 to resurrect Lilith, only to have the process disturbed by the Twelfth Angel. Alternatively, the Twelfth Angel might have reached Lilith and initiated an Impact, and Mark.06 was sent in to clean up and try to arrest control of the process, only to be itself taken over. There are many other variations, as well. It seems impossible at this time to choose between the different scenarios.