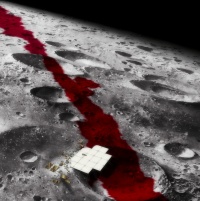 Blood streak and Tabgha Base

Kaworu and the "Moon Giant"

Evangelion Mark.06 under construction at Tabgha Base

Tabgha Base is the 7th Branch of Nerv, stationed in Mare Tranquilitatis of the Moon.[1]

The base is situated on one edge of the giant red "blood stain". In Eva 1.0, the base has a highly unfinished appearance, and is referred to as a "Provisional Excavation Base"[1] although precisely what was being excavated has not been revealed.

Tabgha Base was responsible for the construction of Evangelion Mark.06. Kaworu Nagisa was also stationed here until his deployment at the end of Evangelion 2.0. Mark.06's Spear is shown in wrappings in the process of relocation when Gendo and Fuyutsuki visit the base.

At the end of Evangelion 1.0, Kaworu emerges from one of nine visible coffin-like objects placed in front of Eva-06, with four to one side of him having already been opened, and the other four still closed. They are not seen in either Evangelion 2.0 or Evangelion 3.0 and nothing further has been revealed about them. The storyboards for the scene describe them as "coffins of Kaworu" - although the (somewhat ambiguous) description does not provide adequate explanation as to their purpose or their contents.