Following the incident resulting in the sudden disappearance of the Second Branch (Nevada) and Eva-03's sister unit, Eva-04, the U.S. government panics and demands that Eva-03 be transported off of its soil to Japan. Toji Suzuhara is selected to serve as the Eva's pilot and sent to Nerv's secondary testing facility at Matsushiro to conduct Eva-03's first activation test, supervised by Ritsuko Akagi and Misato Katsuragi. 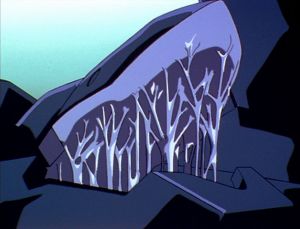 While suspended from a transport plane during its flight to Japan, Eva-03 enters a series of cumulonimbus clouds, suspected to be the point at which it was infected by the 13th Angel, Bardiel[1]. During the activation experiment at the Matsushiro facility, Eva-03 goes berserk under, ostensibly, Bardiel's control, the parasitic "infection" manifest beneath the armor as slime fungus-like growths[2]. After briefly struggling to break free from its restraints, it destroys the base in an explosion.

Upon learning of the incident, Nerv HQ, under Gendo Ikari's command, attempts to eject the entry plug and remotely deactivate the Eva. Once this fails, Eva-03 is officially designated the 13th Angel, and all three Evangelions under Nerv HQ's control are sent to intercept it. Eva-03 attacks and disables Eva-02 and Eva-00, and proceeds to assault Eva-01. After Eva-01 is switched to dummy system control, Eva-03 is quickly overwhelmed and is destroyed by gruesome dismemberment. Eva-01 presumably destroys Eva-03's core off-screen, since it is seen pulling off the chest plate that covers and protects the organ.[3] 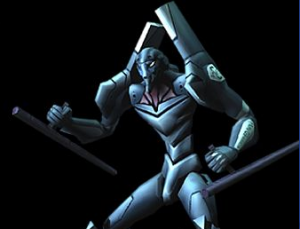 Equipped with tonfa for Battle Orchestra.

Eva-03's armor is a characteristic black (or midnight blue) with white trim. It is described as a Production Model Evangelion, although in terms of obvious physical similarities, it has more in common with the early Evas than the preceding Production Model, Eva-02. The head possesses two eyes (white with red irises), with four nostrils situated on the forehead (evidenced by the holes in the prominent nose piece). The Eva has red blood, and the skin is apparently, like most Evas, dark brown. The armor configuration is fully identical to that of Eva-04, and the same with the exception of the helmet design to Eva-02 and the upgraded Eva-00.

As Eva-03 was parasitized by an Angel and "possessed" almost immediately upon activation, any new features it may have been designed with, such as weapons, remain unknown. Unofficially, Eva-03 uses a pair of tonfa as weapons in the video game Battle Orchestra.

Its arms are seen to gain unusually long length and super-elasticity as a result of the parasitism.

The soul of Eva-03 is not explicitly mentioned in the series, but the general consensus is that it is the soul of Toji's mother.

Other theories hold that it is his hospitalized sister, or yet another iteration of the Rei/Lilith soul. 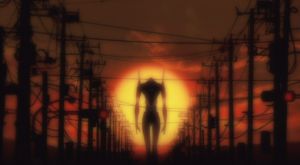 Eva-03 appears in Evangelion 2.0: You Can (Not) Advance. The Eva suffers much the same fate as in the original series: being "possessed" and ultimately being destroyed by Eva-01 under dummy system control. Bardiel is confirmed as the cause of the incident, and the ill-fated pilot is actually Captain Asuka Langley Shikinami, not Toji. While the original version had Eva-01 crushing the entry plug in its hand, the Rebuild version has Eva-01 biting the entry plug in two, accompanied by a high-pitched feminine scream - probably Asuka's. She survives the incident but is put into a medically induced coma and quarantined for possible Angelic infection.

Eva-03's visual appearance has been altered to adhere to the modified Eva design motifs in Rebuild (including body proportions and color changes). The altered color scheme includes such changes as a white "waistband" and a dark red noseplate. During its flight across the Pacific, the Eva is transported on a large red cross in a crucifixion pose, not unlike Lilith.

As with the original series, Bardiel's infection of the Eva is not shown on-screen, only that the transport is headed towards a large storm front shortly after takeoff.

When the infection first manifests, Asuka undergoes a psychic assault involving a psychedelic out-of-body experience. When the Nerv crew attempts to eject the entry plug, it is restrained by luminescent blue mucous material. During the battle itself, the Eva's shoulder pylons are destroyed and a second pair of arms extend to strangle Eva-01 while the original arms pin Eva-01's wrists to the ground.

Toji's usual attire bears a striking resemblance to Eva-03's color scheme, perhaps foreshadowing (along with just about every other hint) that he is the pilot. In Rebuild, the similarity between Toji's attire and Eva-03's color scheme remains, even though Asuka, not Toji, serves as the test pilot.