From EvaWiki
Jump to: navigation, search
For cores in the Rebuild of Evangelion continuity, please see: Core (Rebuild). 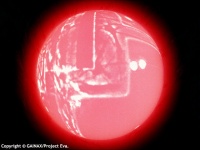 Core as seen in opening sequence

A core (コア, koa)[1] is a red, spherical organ possessed by Angels and Evangelions which contains the entity's soul and, when present, its S² Engine[Source needed].

The core is (typically) the only vital point of Angels and Evas. Unless it is sufficiently damaged, these entities can receive inordinate amounts of damage without truly dying. In those Evas that do not possess an S² Engine, the core still serves as the primary power organ[Source needed], but it is only capable of supplying limited power without an S² Engine.[Source needed]

A core is very hard and somewhat resistant to damage, though deep infiltration from a weapon such as a Progressive Knife is enough to destroy one. Despite their extreme hardness, cores have a fairly brittle consistency, and generally appear to behave like a crystalline material. Upon sufficient damage, shards may chip off until the core completely fractures. Under unique circumstances, however, cores have been witnessed exhibiting a great deal of flexibility: for example, Israfel's two cores can freely fuse and split, and Eva-01's core has transformed to eject Shinji's reformed body (in Episode 20) and to receive the Spear of Longinus (in Episode 26').

In humanoid entities such as Adam, the Evas, and Sachiel -- and even Zeruel and Israfel -- the core lies exposed in the (generally lower) thoracic region. (Lilith is an exception, in that it has no exposed core, and it's unclear if it possesses one at all.) The organ is positioned variously in other Angels. Examples:

Leliel, due to existing within four spatial dimensions, would not be expected to have a normal spherical core. This is born out during its destruction, when its super-flat body breaks open to reveal a hard, glowing red structure underneath in the process of being shattered -- which is, in all likelihood, its core as it appears within three-dimensional space.

Bardiel does not initially appear to have a core in any meaningful sense. However, the dummy plugged Eva-01 targets the entry plug specifically, stopping its assault once the plug is destroyed. When Toji is being withdrawn from the plug, the interior of the plug appears to be completely red, and Shinji's cameras designate the plug or some aspect of its contents as being the Angel itself. This along with Eva-01's behavior suggests that Bardiel converted the entry plug interior into its core when it took corporeal form within Eva-03. Possibly corroborating this further is that the equivalent of Bardiel in the Rebuild continuity, the Ninth Angel, very explicitly converts the test pilot's entry plug into its core. That is to say, this may not be a new element so much as a preexisting one that was simply made more obvious.

Ireul presents an odd case, in that it is a collection of many microscopic entities: Is there one "shared" core, or does each individual possess its own? Something else entirely? The nature of the core possessed by the amorphous, shape-shifting Armisael is also unknown.

For Yui and Kyoko's contact experiments along with Eva piloting in general, the ventral end of the Entry Plug is inserted into the core.[Source needed] According to preparations made prior to Yui's Contact Experiment, a cylindrical cavity was excavated to permit the accommodation of the plug (21').[Source needed] Eva cores also appear to contain LCL (see Episode 20, Episode 23', and Episode 26'). There's a possibility that this is generated locally, on account of "inside the core" imagery having many similarities to the Sea of LCL, suggesting a potential link between the two.

Eva-01 alone is confirmed to possess two to four small core-like structures (referred to as "small cores" in production art) that are situated around its main core. Since it is implied that Nerv can alter or even manufacture cores (or some form thereof) the smaller cores might be artificial inserts, for purposes unknown. One possibility is that the small cores around the main core serve a complementary purpose, or as a backup to the main core. These structures might be related to the five orbs found over the sternum of the simulation bodies, which are laid out in a configuration comparable to Eva-01's main core with the four mini-cores around it.

At Second Impact, a black circle or ellipse appears in Adam's solar plexus region, apparently smaller in size than the core itself (OP, 12). Possibly related, a dark circle or sphere manifests within Eva-01's core shortly before it fuses with the Spear of Longinus (26'). The nature of these phenomena is entirely unknown, but it is possible that they are somehow related to the manifestation of the Chamber of Guf.