Evangelion Unit-04 (エヴァンゲリオン４号機, Evangerion Yongouki) is the fifth completed Evangelion and the third "Production Model" Evangelion. Eva-04 is one of the two units constructed in the United States. Nerv's second branch base (Nerv-2) was destroyed along with Eva-04 in Episode 17, when the Eva's S2 Engine failed upon activation. A Dirac Sea developed as a result, and enveloped the Second Branch. It is heavily implied that the failure of the S2 engine was the result of an accident, not sabotage. After this incident, the United States immediately shipped Eva-03 to Japan, leading to the events of Episode 18.

Although never seen on screen, GAINAX occasionally releases production art of the unit. It is depicted as being silver in color and physically identical to Eva-03. Like the other Production Models, it uses the same 5-plate torso armor design and shoulder mounted storage pylons. Its unique feature is its S² Engine, assumed to be a restored version of Shamshel's remains (which we see in Episode 05.)

Eva-04 had no designated pilot. A reasonable assumption to make is that one of the students from Class 2-A would have been the pilot, depending on the availability of an appropriate core. Alternatively, assuming that the technology had been improved sufficiently, Eva-04 might have been designated to be equipped with a Dummy Plug instead of a human pilot, much like the Mass Production Evangelions.

In spin-off materials, Kensuke Aida is the pilot of Eva-04.

The identity of the soul inside the core of Eva-04 is never specified in the original series, and it may never have had a soul inserted into it. However, if Kensuke Aida was indeed meant to be the pilot as spin-off materials suggest[1], the soul designated for Eva-04 would have been Kensuke's mother.

In the Girlfriend of Steel 2/Angelic Days manga, Kensuke Aida is depicted as the pilot of Eva-04.

In the PSP version, Kaworu and Eva-04 get sucked into Leliel's Dirac Sea. Once the self-revelatory dialogue within is successfully navigated- if Shinji convinces Kaworu to choose life over death- Eva-04 goes berserk and rips out of the Angel. Kaworu refers to the Eva as "he" (kare).

In Shito, Futatabi, Kaworu pilots Eva-04 and can dispatch of Angels with the Spear of Longinus.

Saigo no Shisha includes a scenario featuring a Rebuild version of Eva-04 being controlled by Kaworu from outside the cockpit (similar to Eva-02 in Episode 24) battling the Sixth Angel, equipped with an Eva-sized riot shield (a mainstay of Eva-04 action figures) and the Spear of Longinus.

In Secret of Evangelion, protagonist Kyoya discovers that the story about Eva-04's S2 Engine was fabricated and that the unit is being brought to Nerv Headquarters. 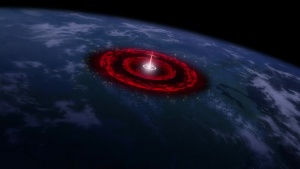 Eva-04 served as a next generation test bed for a new internal power unit. The research was brought to an abrupt end when the Eva vaporized and took out the Second Branch with it. From space, a flaming cross can be seen rising from the epicenter, and a dark red disc with two bright red rings spreads out from the site over the earth's surface. The only confirmed data is that of an A.T. Field collapse.

Once again, the Eva itself is never seen.