The Neon Genesis Evangelion Film Books, published by Newtype, provide sanctioned commentary and some background info for each episode. They include images and dialogue from the series with some additional explanation and notes, and sometimes background and production information. They mostly state the obvious but can be useful in clearing up some things that aren't completely clear or ambiguous.[1] A notable example is how they mentioned the then common theory that Misato had killed Kaji in Episode 21, which would later be retconned in the Director's Cut version. [2]

These are not made by Gainax themselves and only in consultation with them, not unlike other materials such as Evangelion Chronicle.[3] Thus they should be considered Tier Three Canon. They consist of 9 volumes for the original series, as well as one for Evangelion: Death and two for End of Evangelion. 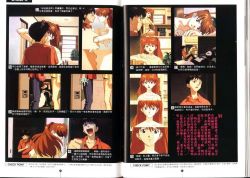 Example page from Volume 5, dealing with Asuka and Shinji's kiss in Episode 15. This is from the Chinese release.