Not to be confused with the EVA EXTRA mobile application released in 2019. 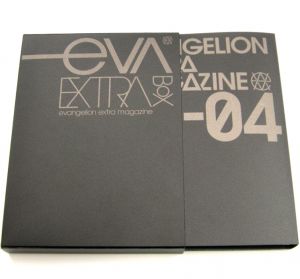 Eva Extra is a set of 4 promotional magazines that lead up to the theatrical release of Evangelion 2.0: You Can (Not) Advance. The first 3 magazines were given away for free simultaneously with the release of the 3 official movie trailers. They contained information about the upcoming movie as well as stills from the trailers. The 4th magazine was sold at theatres during 2.0's theatrical run and contained contents from the first 3 magazines, postcards, and several pages of art and new stills from the movie. Unlike the previous 3, Eva Extra 04 came with a plastic box and binders.