How I got into NGE

Well, a few years ago (2014–ish), a buddy of mine recommended Evangelion because of my love of Gundam Wing (which explains my profile picture) and Gundam in general. I put it to the back burner because I was still finishing college, and figured I'd get to it at some point when I had more time. Sadly, the suggestion was lost for some time.

But what actually got me to search it out was this gif I saved from tumblr way back in 2012, which I found while paroosing my computer one very boring afternoon (thank god for bordom). I had saved it casue she looked awesome, and I would eventually search out where the gif came from. So, after using the almighty Google to find "hot redheads who pilot mechs" I found Asuka Langley Soryu and Neon Genesis Evangelion.

I watched the first episode, and was intrigued by the premise, and by episode six, I was a very happy, very hooked person on a wonderful new show. From there, meeting Asuka watching the series, I just couldn't stop. By Episode 26, I was thoroughly confused, but honestly, the EoTV made sense to me, even if it only came around because of a non-existent budget, and by the End of Evangelion, I was enthralled.

Since then I've probably watched the series 20 times through, and the Rebuild series probably 10 times (I can't exactly say "through", because that implies its actually finished), The only part I've only seen once was that scene in EoE that everyone categorically hates, because, well, you know... disgusting...

After watching the show, I found the manga, read it, and loved it! It was so nice to see a different yet equal continuity that changed a few details, yet made its own compelling and enthralling story. Then I found the Raising Project manga, and thought it had a nice view into the alternate universe Shinji peered into in Episode 26. Then I got into reading fanfiction about NGE because I couldn't get enough (and waiting for Anno to make the final movie is killing me slowly). After reading loads of fanfiction (and making some greats friends along the way), my fandom has now peaked, and I was inspired to write my very own fanfic which, is my first foray into writing, and is something that I am immensely proud of. 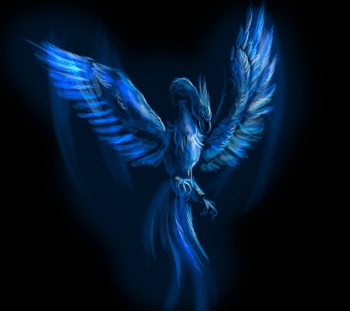 Well, it is an awesome picture, ain't it?

So, many people wonder "why DarkBluePhoenix"? Well, I had (or have I guess) a thing for mythical creatures thanks to Harry Potter, with the powerful and majestic phoenix being among my favorites. And was I thought about a username to use online back in the day, I thought that, between the phoenix's link to fire, and the fact that the blue part of the flame on the candle is hotter and more brilliant to look at than the yellow bit, I thought, "well, BluePhoenix seems cool." But, as I was surfing the web in high school during some downtime in accounting, I came across the image to the right, and that's when it clicked, adding "Dark" to the name made it sound cooler, though it is inarugably a very long username at 15 characters. Many have abbreviated it, quite appropriately to either "Phoenix" or "DBP" both of which are acceptable to me.

I figured, seeing as the show had given me so much inspiration and enjoyment, I figured the least I could do is help maintain and grow the fandom's wiki. So, in short, I'm here to fix grammatical errors if I see them, maybe upload some better images on pages where there are only a few that could do with a quality upgrade. But my main reason for being here was to create pages for the Shinji Ikari Raising Project manga, , which after having read it, realized the wiki could do with a bit of expansion. Then after seeing the pages regarding the NGE manga, and Campus Apocalypse, decided those could probably use a bit of TLC as well so that they would be on par (or at least closer in execution) with the pages detailing the show itself.

So, I make it no secret that I enjoy certain parts of the manga far more than I do the show. Namely, Shinji being a bit more of the typical mech pilot. He still had his whineiness, but he also has a bit of a sarcastic streak and confidence lacking in the show. Overall, I found the manga very interesting, and it certainly made things darker than the show did at certain points, namely Toji dying rather than simply being maimed, which pushes Shinji further into depression and moves him further away from his friends. Shinji even attacks his father over the callousness towards Toji's death. Then there was Kaworu's bit of kitten murdering which really made him a far more intriguing villain.

I also liked the bit of back story we got in Shinji's life in Atsugi (or wherever he was) which explained some of his depression, besides the obvious part where his mother died. Then we got some insight into Kaji, who was under utilized in the series, it was nice to see some of his motivations as well, and his expanded interactions with Shinji were also an enjoyable read. I also liked Asuka's motivations for fighting Arael on her own in the manga, as there was a far more imminent threat to her status as a pilot with Kaworu being present at the time of her fight.

"Now I am become Death, the destroyer of worlds." Said at the beginning of the nuclear age by J. Robert Oppenheimer.

"That which does not kill us makes us stronger." Words of Wisdom from German Philosopher Friedrich Nietzsche.

Where to Find Me

Archive of Our Own