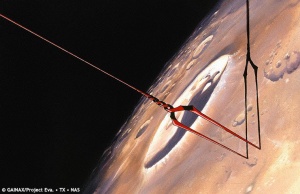 The Spear of Longinus

The Spear of Longinus[1][2] (ロンギヌスの槍, "Longinus no Yari") is an extraterrestrial artifact with the power to penetrate any A.T. Field and immobilize beings of god-like power.

Physically, the Spear of Longinus resembles a long, red bident on an Evangelion scale. Its structure is inherently double-helical (in its normal configuration), with the majority of its length being straight and composed of two strands which are tightly interwoven. At one end, the two strands unwind and form two massive tines.

While the bident is the Spear's default shape, it also has metamorphic capabilities. When thrown at the Angel Arael (22), the tines wrap together to form a seamless piercing object. Upon encountering Arael's A.T. Field, the "flaps" of the Spear open up, revealing white, gill-like structures that seem to aid the Spear with self-propulsion under conditions of extreme resistance. Finally, the Spear's bident shape is perpetually altered by Eva-01 in Episode 26’ when she separates the two helices, and the Spear takes on a form reminiscent of a horizontally elongated infinity symbol, ∞.

The Spear may be considered to be a weapon of "god-like" power. N² weapons have enough destructive potential to bring minor to moderate amounts of damage upon some of the weaker Angels; and Evas can use armaments against Angels after nullifying the Angels' A.T. Fields with their own. However, the Spear of Longinus is capable of piercing the active A.T. Field of any Angel or Evangelion, entirely by itself.

The Spear is not of Terran origin, having been created by the First Ancestral Race, an ancient extraterrestrial humanoid species. The one seen in the show is also not the only Spear of Longinus created; every Seed of Life, including both Adam and Lilith, was sent with a counterpart Spear, meaning seven in all.[3] At least one established function of the Spears is that of a "security device" capable of safeguarding the First Ancestral Race's plans should they somehow be compromised.

Spears of Longinus are technically alive and are even said to have wills of their own. The Spear featured in Evangelion belonged to Adam, whereas Lilith's is believed to have been lost or destroyed during First Impact. The Spear can be heard "howling" after Eva-00 throws it at Arael, and later during The End of Evangelion the spear seem to return from the Moon by itself in response to Eva-01 going berserk. 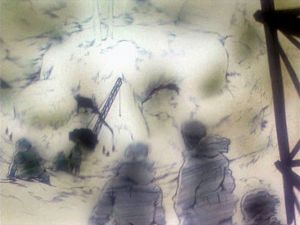 The Spear of Longinus impaled in Adam's back, as found by the Katsuragi Expedition

Adam, contained within the White Moon, was the first Seed to land on Earth, at least 4 billion years ago. Before Adam-based life could be established, Lilith crash-landed on Earth within the Black Moon, the collision causing the event now known as the First Impact and separating Lilith from its own Spear (possibly destroying it, but the truth is unknown) in the process. Due to an unspecified law in the First Ancestral Race's plan, two Seeds are not meant to co-exist on the same planet, and it is implied that Adam's Spear -- as the only one remaining in proximity to a Seed, or on the planet at all -- took the initiative to subdue its own counterpart Seed. Adam remained in suspended animation for billions of years while Lilith-based life was allowed to develop and prosper.

In the year 2000, the Katsuragi Expedition unearthed Adam and the Spear in the Antarctic. The Spear was removed, briefly relocated to the Dead Sea region, and then shipped back to the South Pole in preparation for the Contact Experiment. After the experiment led to unforeseen consequences, the team attempted to wield the Spear against Adam to "reseal" it, but they failed. In classified video footage of the incident, scientists can be heard shouting off-screen that the Spear needs to be "pulled back," and that it's "sinking in."[4] Second Impact could not be averted, and, ultimately, the Spear appears to be responsible for causing Adam's retroversion to an embryonic state[5].

The Spear flying toward Arael in orbit (click for animation)

The Spear first appears in the series in Episode 12 under wraps as it is transported from the Antarctic to Nerv on the flight deck of an aircraft carrier[6]. It reappears at the end of Episode 14 as Rei is ordered by Gendo Ikari to go into Terminal Dogma to insert it into Lilith, the result of which is seen in Episode 15. It remains there until the battle with Arael, upon which Rei once again descends to collect it from Lilith in order to destroy Arael, which was floating in outer space high above Earth's atmosphere.[7]

It finally returns in Episode 26’ after reacting to the awakened and freed Evangelion Unit-01. It then becomes an important tool for the Human Instrumentality Project and merges with the Eva, creating the Tree of Life. However, after Shinji Ikari rejects the process, the Spear is regurgitated, destroys the copies used by the Mass Production Evangelions and leaves Earth accompanied by Unit-01.

The Heavy Spear reveals its true nature (click for animation)

Seele is able to create nine copies of the Spear of Longinus for use by their Mass Production Model Evangelions. The copies have most of the original's properties, such as its size and dimensions, along with its ability to pierce A.T. Fields, although they are bluish grey in color rather than red. Also, unlike the original they cannot be used to initiate Instrumentality with Lilith herself. Even after the original Spear was lost, Seele felt they still had a chance, albeit more difficult, of initiating Third Impact by using the replica Spears and Eva-01 (itself created from Lilith), though it is possible that even Seele wasn't entirely sure if this would be sufficient (this remains unknown as the original Spear then returned to Earth).

The metamorphic capabilities observed in the replicas exceed that of the original. When the Eva Series are first sent out in 25’, their Spears are initially disguised as massive, double-edged blades that bear no resemblance to their native forms. The weapons' true nature is revealed when one comes in contact with Eva-02's A.T. Field and, within seconds, responds by morphing instantaneously into its Spear shape. When the Spear copies are destroyed, they initially bubble up into LCL-colored masses with little lower bodies projecting out of them (as per Lilith on the cross). According to the storyboards, this substance actually is LCL.

Officially, the "double-edged blade" variation of the Spear copies goes by two different names. The script refers to them as 重い槍 (omoi yari), or "Heavy Spear." However, this term is rarely observed elsewhere, and 大剣 (ooken), or "Giant Sword," is seen in its stead.

In the pachinko games Shito, Futatabi and Saigo no Shisha, the Spear of Longinus can be used by Kaworu in Eva-04 to dispatch Angels under certain conditions.

The Rebuild continuity reintroduces the Spear of Longinus, and introduces a similar-looking counterpart called the Spear of Cassius. While Spears of Longinus appear in all three released films thus far, they are not referred to by name until Eva 3.0.

In Eva 1.0, Lilith is impaled on a Spear of Longinus. In Eva 2.0, four Spear of Longinus-like objects[8] are present at Second Impact, but only two can be confirmed as Longinus-type. The one impaling Lilith may be one of these.

Also in 2.0, Eva-05 possesses a weapon called "Anti-Angel Extermination Weapon Spear of Longinus Basic Type (Pseudo-Restoration)."[9] "Pseudo-Restoration" could imply that Eva-05's weapon was based upon one of the Spears present at Second Impact, but it is unclear what is meant by the "pseudo" in its title (partially restored?).

In 3.0, Kaworu says that the Spears of Longinus and Cassius -- located in Central Dogma -- can be used in concert to "repair the world," although the exact details are not elaborated upon. When Eva-13 enters the chamber, Lilith's corpse is shown impaled by two objects (that resemble the Spear of Longinus as seen in the original series when it was thrown at Arael): one in Lilith, and the other through both Lilith and Eva Mark.06. Kaworu judges from their identical forms that these aren't the Spears he and Shinji came to retrieve. Once removed from Lilith, both objects shift into the Spear of Longinus' bident form.

After Eva-13 enters an Awakened state, Kaworu attempts to stop it by stabbing both objects into the Eva. However, the Eva remains active until both pilots are removed from it.[10]