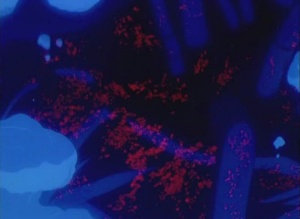 The simulation bodies (模擬体, mogitai) are three incomplete Evangelion units, kept in the Pribnow Box in Nerv HQ for testing purposes. They are unarmored, have no legs, and instead of heads have a large number of cables extending from their neck, as well as tubes extending from their lower torsos where their legs should be. Each of them only has a right arm, with only a stub of a left arm terminating before the elbow. Unlike a proper Evangelion, a simulation body has no visible core.

Simulation bodies are used in tests aimed at refining the synchronization between Evas and their pilots. Synchronizing with a simulation body gives a different feeling than from piloting a normal Eva, perhaps due to the missing limbs and lack of a core. For instance, Asuka described her experience as feeling as if all of her body felt numb except for her right arm.

The Angel Ireul infected the simulation bodies during its invasion of Nerv HQ, raising the arm of one of the simulation Evas towards the control box with Ritsuko and Misato inside. However, Ritsuko quickly severed the arm at the shoulder with demolition charges planted inside of it. From the core of its infection around the simulation bodies, Ireul proceeded to form into a living biological computer circuit, and hacked into the Magi supercomputers.

Production sketch of a Simulation body

Production sketch of the Simulation bodies
Retrieved from "https://wiki.evageeks.org/index.php?title=Simulation_Bodies&oldid=76518"
Categories: