It seems like it's an important day for nearly everyone at Nerv. Misato and Ritsuko are going to a wedding; Shinji and Gendo are visiting Yui's grave; Asuka has a date. However, important things will spring from these seemingly mundane events.

As the episode opens, Gendo and Fuyutsuki are in a helicopter, flying over the second and third Ashi lakes[1]. Fuyutsuki tells Gendo that Chairman Keel is impatient over delays in the Human Instrumentality Project. Gendo replies that everything is coming along well. When Fuyutsuki asks what should they do about "that man", Gendo says that they should let him continue working.

It then cuts to a scene with Kaji, investigating a seemingly long-abandoned building somewhere in Kyoto. He hears someone stop outside and draws his gun, but stops when a voice says, "It's me". The woman outside the door is feeding a group of cats. She tells him that the company he is investigating, Shannon Bio, is one of 108 subsidiaries of the Marduk Institute; it is the 107th to prove to be a fake. She shows him a list of the Board of Directors, which is Gendo, Fuyutsuki, and Keel. The cat Lady then reminds him that he is supposed to be investigating Nerv, and warns him to stay away from Marduk, whose stated purpose is to select Evangelion pilots.

At school, Asuka leaves a prank message for Kaji that she is being attacked by a pervert. Her friend Hikari approaches her and asks her to go on a date with her sister's friend. Meanwhile, Shinji, is watching Rei cleaning the classroom with a fascinated look on his face.

Back at Nerv HQ., Misato and Ritsuko discuss the wedding they will be attending the next day. During this, the pilots are having a synch test. Ritsuko notices that Shinji seems more morose than usual, and Misato explains that it is because he has see his father tomorrow. Afterwards, in the elevator, Shinji, who is visiting his mother's grave with his father the next day, asks Rei what he's like, but she doesn't know the answer. Remembering her cleaning that day, he comments that she wrung out the washcloth "like a mother". This visibly upsets Rei, who asks him, "What are you saying?"

That evening, Misato comes with a new dress she has brought for the wedding the next day. She discusses her plans for tomorrow with Asuka, who reveals that she has been set up on a blind date. She asks if she can borrow some of Misato's perfume to wear for the date, but Misato forbids her from this, telling her that it is "not for kids". Misato asks where Shinji is, and Asuka says that he has been sulking in his room ever since he got home. Shinji lies on his bed, contemplating his complicated relationship with Gendo. When he hears Misato at the door, he pretends to be asleep. Misato tells him that however he feels about tomorrow, he shouldn't run away, because nothing will ever change if he keeps doing that. She also tells him to keep his chin held high because he will be seeing his mother too.

The next day, Kaji arrives late at the wedding. Misato first scolds him for being late, then complains that he hasn't shaved and has dressed sloppily, before straightening his tie, prompting Ritsuko to comment that they are acting like a married couple. Kaji is amused by this, but Misato is not.

Gendo and Shinji have arrived at Yui's plot at a cemetery outside Tokyo-3. Gendo comments that they haven't been there together for three years, prompting Shinji to admit that the last time he got upset about something and ran away. We also learn in this conversation that Gendo has kept no pictures[2] of Yui, and that there is no body buried at the plot; the headstone is purely decorative. Gendo tells Shinji that people survive by letting go of their memories, but Yui taught him that there are some things that should never be forgotten. Gendo's helicopter then arrives, and he bids Shinji goodbye as he turns to leave. Shinji gets a a brief glimpse of Rei aboard, then gathers his courage, and tells Gendo he's glad they had this chance to talk. Gendo briefly acknowledges this before leaving.

Back home, Shinji is practising the cello when Asuka also comes home. She listens to him playing the piece to finish and then applauds him, telling him that she had no idea that he played an instrument and is rather impressed by his musical skills. Shinji, in his usual self-deprecating manner, says he's been practising since age five and hasn't improved much since then and admits reason he still plays is no one ever told him to stop. He asks what she is doing home already, and Asuka admits that she ditched her date as she found him boring. She says that Kaji is the only man she needs. 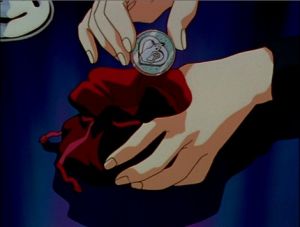 It's a cat Souvenir

The wedding has ended, and Misato, Kaji, and Ritsuko are out drinking. When Misato leaves briefly to visit the restroom, Kaji and Ritsuko discuss his and Misato's past relationship, but he dismisses it as old history, saying that they were just a couple of kids who were playing house and had no real clue about what they were doing back then. He then hands her a gift in the form of a trinket which he calls a "cat souvenir". She looks at it and asks him why he was in Kyoto. He feigns surprise and claims that he was in Matsushiro. She asks him, as a friend to another friend, not to play dumb with her and warns him that he's going to get burned if he continues doing what he is doing. Kaji replies that he will not let that stop him. Their discussion is interrupted when Misato returns, at which point Ritsuko decides to leave, saying she has some work to finish up.

Back home, Shinji gets a call from Misato that she's going to be out late. When Asuka learns that Misato is drinking with Kaji, she comments that she won't be home that night.

Misato has had too much to drink and vomits in an alley. As Kaji follows her home, the two begin to talk about their past relationship, and Misato then admits that she lied when she broke up with him; there wasn't another man. Instead, she was frightened because he reminded her of her father. Misato admits that she considers herself weak and foolish for ending their relationship for that reason, and also for only being able to tell him this when she is drunk. These comments about herself visibly upset Kaji, and he asks her to stop talking about herself like that. When she starts saying that she's just as pathetic as Shinji, he pulls her in close and shuts her up by kissing her. Misato is surprised by this, but gives in to the kiss.

At Misato's apartment, Asuka says she's bored and asks Shinji if he wants to kiss. When he hesitates, she teases him by implying that he thinks his mother is watching him from heaven, or maybe he's just afraid. Her comments upset Shinji, who resolutely replies that he's not afraid of a "little kiss". Asuka then approaches him, and the two start leaning in on each other, but Asuka pauses, telling him that his breath tickles. Before Shinji can react to this, Asuka, in one sudden movement, pinches his nose shut and then plants a kiss right on his lips. Shinji, dumbfounded, passively stands with his arms at his sides. When the kiss, which lasts long enough to leave him gasping for breath, is over, Asuka, frustrated by his denseness and lack of reaction, runs to the bathroom in order to hide her real feelings[3]. After loudly rinsing her mouth, she shouts, "Definitely not something to do to kill time!"

Shortly after, Kaji brings Misato, who by now has passed out, home. He carefully places her in her bed and then moves to leave. Asuka tries to get him to stay, but he quickly excuses himself by replying that he doesn't have a change of clothes for work with him. Trying to convince him, Asuka begins to cling on to his arm, but instantly lets go when she smells Misato's perfume on him and realizes that they are back together. She stands quiet and stunned, as Shinji bids Kaji goodbye and first snaps out of it when Shinji notices the look on her face and ask her if something is wrong. Asuka replies by blaming the kiss with Shinji as the cause of her distress and leaves.

The next day, Shinji notices that Rei is absent from class again. We see that it is because she is in Nerv Headquaters, standing in a tube which is connected to some mysterious biological looking machinery. She opens her eyes to see Gendo overseeing whatever process she is going through, and she smiles at him. He smiles back.

Kaji is about to enter Terminal Dogma when he feels a gun in his back. It's Misato. She asks him if he's there working for Nerv, or if is he at his other job, as an agent for the Japanese Department of Home Affairs. She tells him that if he continues his second job he will die. He replies that he is not in any real danger as long as he remains useful to Gendo, but he nonetheless apologies for keeping his spying a secret from her. Misato replies that she forgives him, saying that it makes them even for how he helped her yesterday. Kaji then tells Misato that Gendo and Ritsuko have been keeping secrets from her. He opens the door to Terminal Dogma and reveals a white, legless giant, hanging from a cross, impaled by a forked spear and wearing a mask that resembles moon craters. Misato momentarily mistakes it for an Eva, but then realizes that she has seen this thing before, 15 years ago in Antarctica. Kaji confirms that it is indeed Adam. However, Kaji is either lying or mistaken, because it is revealed in episode 24 that the white giant in terminal dogma is actually Lilith[4].