Enraged over Toji's near-death at the hands of his own Evangelion, Shinji refuses to pilot an Evangelion again and prepares to leave Tokyo-3 for good. Just as he is about to leave, an immensely destructive new Angel attacks and he is forced to reconsider his decision.

In the aftermath of the battle with the Angel-infected Eva-03, Shinji is enraged that his father attempted to kill Toji, who he now knows was trapped in the Entry Plug throughout the incident. Shinji refuses to leave the Eva, and even threatens to destroy Nerv Headquarters on his remaining battery power. Gendo and the bridge personnel knock him unconscious by increasing the LCL pressure inside the plug.

Toji wakes up in the hospital, with Shinji sleeping in the bed next to his. Toji goes back to sleep, and has a vision of Shinji and Rei in a train talking about Gendo's behavior. When he wakes up again, Shinji is gone, and Hikari is at his side instead. She tells him he has been asleep for three days after the incident. From the shot, it is evident that Toji's left leg has been amputated[2].

Shinji is brought in to his father's office in handcuffs, where he is charged with various offenses against Nerv: threatening, intimidation, insubordination, and use of an Eva for personal vendettas. Shinji responds by saying that he will never pilot again[3]. In response, Gendo decides to delete his files and reassign Rei as the pilot of Eva-01, with the Dummy Plug as a backup. Meanwhile, the Angel having been killed along with the Eva, the remains of Eva-03 are dissolved.

Back at Misato's apartment, Asuka shows her disdain for Shinji's actions. Misato warns Shinji that, should he leave, his activities will be closely monitored. Shinji aggressively replies that he doesn't care. Surprised by his conviction, Misato lets Shinji leave. However, a state of emergency is declared as soon as he reaches the train station; a new angel is approaching. 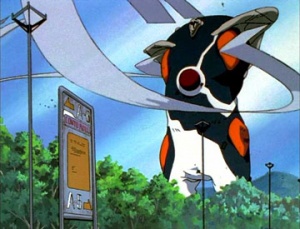 The Angel Zeruel approaches Tokyo-3 from the air. Missile batteries fire at Zeruel to no avail, and Zeruel responds with a weapon that destroys eighteen of the twenty-two armor layers above the Geofront. This aggressive and extremely destructive new enemy gives Nerv very little time to prepare a counterattack. Rei is sent to pilot Eva-01, but the Eva rejects her immediately. Attempts to activate it with the dummy system also fail. Meanwhile, Shinji watches as Zeruel sets off multiple cross-shaped explosions, and questions his decision not to pilot again. Zeruel finally breaks through to the Geofront, where Asuka has been stationed. She is surrounded by a wide array of weaponry that has been randomly piled around her. Eva-02 sprays Zeruel with two Pallet Rifles, but to no effect. Becoming exasperated, Asuka grabs two new weapons and fires rocket after rocket at the Angel. Again, her munitions have no effect. After the barrage, Zeruel extends its foil-like appendages and severs both of Eva-02's arms with ease. Asuka screams in pain and anger and charges Zeruel, who promptly decapitates Unit-02. Fortunately, the command center has cut Asuka's synchronization rate with her Eva; Asuka does not receive any sympathetic injuries.

Along with Kaji, Shinji watches the battle rage before him. Rei follows Asuka's charge with a suicide attack[4], attempting to destroy the Angel's core with an N2 bomb. The Angel covers its core with an armored membrane and survives the explosion, completely unhurt. The explosion puts Eva-00 completely out of action, but Zeruel proceeds to stab it in the head anyways.

With both Evas defeated and Eva-01 still refusing the Dummy Plug, Nerv nearly succumbs to the dire situation it has been placed in. At the last second, Shinji barges in and demands to pilot Eva-01. Zeruel damages the top of the command pyramid and breaks into the control room, prepared to obliterate the unfortunate bridge personnel. A second before the Angel releases its charge-up attack, Eva-01 breaks through into the observation room and lands a terrific punch into Zeruel's face. Wrestling with the Angel, Shinji slams Zeruel through the opposite wall and into an Evangelion cage. In the ensuing battle, Eva-01's left arm is shot off by a beam from Zeruel; before any more serious damage can occur, Shinji forces Zeruel onto a launchpad and manually activates it. Shinji and the Angel are launched into the geofront, where Shinji proceeds to manically hammer at Zeruel's core with its remaining arm. In his rage, Shinji grabs Zeruel's mask, pulling at it so hard that the flesh holding on the Angel's face is exposed. At that moment, there is a loud, resounding beep; the Evangelion has run out of power. Zeruel wraps an arm around the Unit's head, hoisting it aloft before hurling it into HQ. Zeruel makes an initial cut into the Eva's chest armor, before blasting it with another powerful beam. The chest armor is melted off, and we see that Evangelion-01 has a core. Zeruel begins to pound on the core in an attempt to penetrate it, but the Eva reactivates before the final blow can be delivered. Shinji is no longer in true control of the Eva; it has gone berserk. Grabbing Zeruel's arm, Unit-01 yanks the Angel towards it. The unit breaths heavily for several moments before giving Zeruel a mighty kick strong enough to rip Zeruel's left arm from its body. Unit-01 uses the arm to regenerate her own, before launching her own attack on the Angel. After laying it out on the ground with an immensely powerful A.T. Field attack, Unit-01 devours the crippled Angel in order to ingest its S² Engine. The Evangelion then snaps off its bindings, roaring at the sky.