Tributes to Neon Genesis Evangelion in other Media

This page is for those references to Evangelion that do not fit into other categories.

According to the audio commentary, the panda spirit Hei Bai was directly inspired by the angels in Evangelion.

In volume 1, episode 4, page 19 of the "Original English-language manga", Aoi House, published by Seven Seas Entertainment, there is a mysterious character called Oniisan which provides Morgan McKnight high-tech equipment that appears as a Seele Monolith. 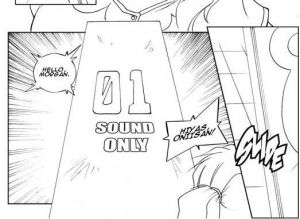 Oniisan appearing before Morgan as a Seele Monolith

The series' antagonistic forces, the Hierarchy of Laguna, have their ranks all comprised of Angels. While their ranks are much more varied than Evangelion's namesake mech cyborg demigods and titular abstract alien abominations, their anatomy, although more heavenly looking, is comprised of unusual figure more akin to angels depicted in medieval sources, such as the Book of Enoch, and have marble exoskeletons that mask their grotesque underlying organic features, which eventually cracks and breaks off during battles. In addition, angels known as Affinities also bear uncanny resemblance to Mass Produced Evangelions found in End of Evangelion.

It should be noted that both Bayonetta and Neon Genesis Evangelion are also endorsed by Sega, and share the same theme song, Fly Me To The Moon. 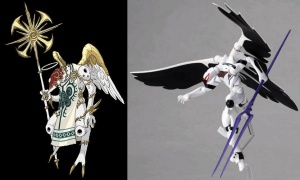 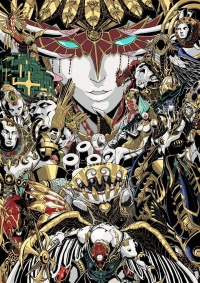 Fly me to the moon, and let me sail amongst the stars~

Danger 5 is an Australian comedy series about 5 international spies out to kill Hitler. In the 2nd episode of the 2nd season "Johnny Hitler", Ilsa, wears a school uniform that's exactly the same as the ones worn by the female students in Evangelion.

In the series finale, Soos introduces McGucket to anime through a mecha show, where the mecha bares a striking resemblance to an Evangelion. And when the secret message at the end of the episode's credits is decoded..

"Legends", a two-parter from the first season, begins with the League fighting a giant robot clearly based the Evangelion designs, mostly Eva-02 (four eyes and smooth head). However, it is a fully mechanical construct controlled by Lex Luthor. (Justice League images courtesy of World’s Finest)

Furthermore, Bruce Timm, the creator, producer, and character designer for this and other series in the "Detective Comics Animated Universe", has also drawn his own pictures of Rei and Asuka in his style. 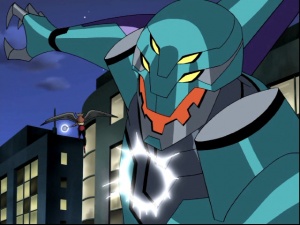 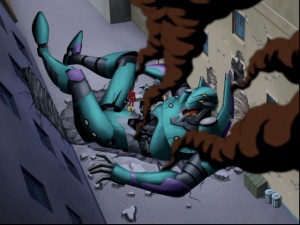 In episode 9-B, "Hamstergeddon", the camera setup when Ultra Pipi attacks Zim's ship is very similar to the scene in Episode 02 when Evangelion Unit-01 goes berserk. (This similarity was mentioned on the episode's commentary track.) Furthermore, in the episode "Megadoomer", the eponymous mecha's need to constantly be plugged into a power supply was described by series creator Jhonen Vasquez as "Eva-esque", though the idea was not initially an intentional reference. 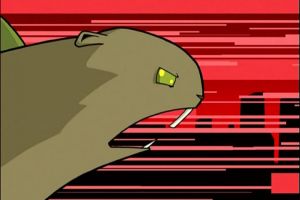 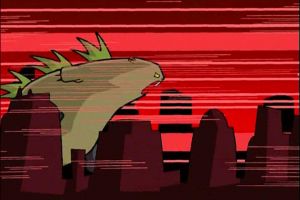 Suzuki Matsuo's 2004 romantic comedy Koi no Mon features, among its countless anime and manga references, a cosplay bordello that capitalizes on Rei Ayanami's fame as an otaku idol. Hideaki Anno makes a small cameo appearance in the movie as an inn keeper. Sauce. 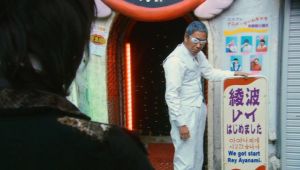 Some prime Engrish in the brothel's ad. 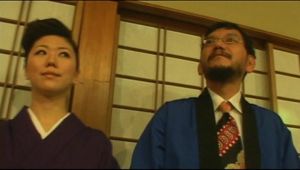 Anno as an inn keeper.

Henry Clayton, the son of the title character, has a large collection of toys and action figures arranged in his room. Two Kaiyodo Evangelion figures, an Eva-02 and an MP Eva, are shown straddling the arm of a desk lamp.

Issue #4 of Marvel's Mystique comic book series briefly features Soviet-built anti-mutant Sentinel robots that look like beefy Evangelions. This is an intentional homage, and the artist Jorge Lucas has admitted being a big Evangelion fan.

Article about the 4th Issue of Mystique and Jorge Lucas

My Little Pony: Friendship is Magic

In the Season 5 premiere, a pony uses a stick clearly resembling the Spear of Longinus to strip ponies of their individuality to prevent heartache. Later that same season, in the episode "Scare Master," Fluttershy creates cardboard cutouts of several anime characters as ponies, including Rei Ayanami. 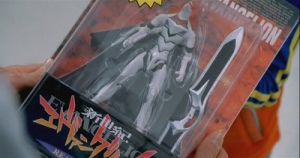 The character Jake begs his mother to buy him the "Eva" 04 action figure, and Seymour 'Sy' Parrish (played by Robin Williams) later offers it to him for free. It is commonplace for movies and shows to rename or repackage existing products with a generic name and graphic logo. A Mass Produced Evangelion action figure can also be see in the toy store in the movie and the kid incorrectly describes the Mass Produced Eva as being a good guy. Despite the fact that Robin Williams is apparently a "huge fan" of Evangelion and the toy is an item from Robin Williams' personal collection [1], Sy pronounces it "Eh-van-'jell-ee-un". (Video Clip).

In episode 7 of the j-drama Partners by Blood, a character answers the question "What made you want to go out with here?" by replying "We got along since we both like Evangelion."[1] 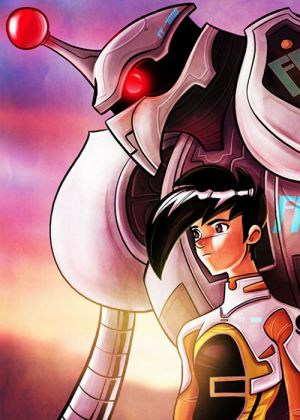 Webcomic artist Mike Krahulik (Gabe) of Penny Arcade fame drew an anime themed poster for Sakuracon 2009 featuring stylised characters from the Penny Arcade strip; Gabe is featured as a pilot and the "Fruit Fucker" juicer as his giant robot companion. The Gabe character wears a Eva-esque "plug suit" and the Fruit Fucker features a similar profile to Unit-01, with the horn on Unit-01's helmet becoming the Fruit Fucker's antenna. 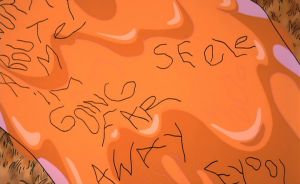 This 1997 Winnie the Pooh movie contains a single shot of Christopher Robin's note covered with honey that has the words "Seele" in it (although that's not part of the note). Probably just a coincidence, although Disney has been known to plagiarize anime (eg. Kimba the White Lion) and Gainax in particular (Nadia).

In the season six episode "Brilliant Century Duck Crisis Special," the normal opening is replaced with a parody of Evangelion's OP.

In the TV Show Rescue Me, shown on the FX channel, Tommy Gavin (played by Denis Leary) is seen in one of the other character's room's which has an "Animerica" poster of the DVD cover of The End of Evangelion. 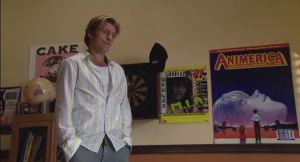 In the first season finale, a scene references the Hell Train scenes seen throughout the series with Shinji. 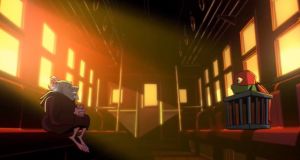 Fender carries a spear that looks similar to the Spear of Longinus. Of course, Fender is voiced by Robin Williams.

The ending of "The Test" pastiches the the "Congratulations!" scene from Episode 26 by having Steven be congratulated by the other characters as a minimalist version of the theme song plays. Later, in the episode "Joy Ride," this happened.

Envy Adams' hair was inspired by that of Asuka. Also, in the video game, Todd Ingram's force field resembles an A.T. field.

A character resembling Misato appears in an "anime" scene. This was likely an in-joke on the part of an animator, and not a member of the show's core creative team.

Even though the Original Generation incarnations of the Super Robot Wars game franchise only feature characters created by its developer company Banpresto instead of the usual crossover ensemble casts, these games sometimes make humorous references to mecha anime (most notably Gundam).

In Teen Titans: Trouble in Tokyo, the design and the sound effects of the elevator to the Trooper HQ are identical to the elevator going into the Geofront. A logo that looks similar to Nerv can be seen on a truck pasting by in the movie.

The Day the Earth Stood Still

In the 2008 remake of The Day the Earth Stood Still starring Keanu Reeves, In the beginning of the movie where you see a Evangelion Unit 01 action figure is seen in Jacob's (Played by Jaden Smith) room when Helen Bens (Played by Jennifer Connelly) walks in just before the unknown alien spaceship crash course to the Earth. (Incidentally, the title of episode 11 is a shout out to the original movie.)

The TV drama adaptation of Train Man contains numerous Evangelion references, including a stoner fanboy wearing Rei's plugsuit. (Not surprisingly, Mobile Suit Gundam is another show that gets a specific, super-creepy fanboy.)

Incidentally, the opening of the drama is based on the Daicon IV opening animation by the original Gainax core staff. 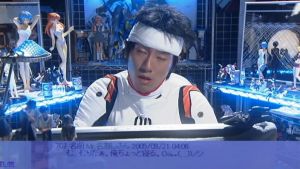 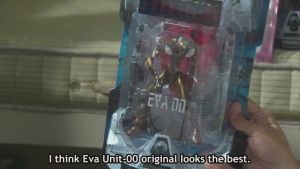 The musician known as Welder has employed sound clips from the End of Evangelion in one of his songs, "Find You Here." The sound clips in question come from the scene when Gendo first meets Rei in order to begin his version of Third Impact: "I knew I'd find you here," and "The time has come. Let's go."