Similarities to Neon Genesis Evangelion in other Anime and Manga

These are possible references to Evangelion from other anime and manga, but have not been confirmed yet (despite all appearances), or are unconfirmable or unlikely, but still worth noting.

Azumanga Daioh, an anime that aired in 2002 and based on a 4-koma manga of the same name by Kiyohiko Azuma, in episode 3, Yukari mimics the way Misato drinks beer, slamming the empty glass down and yelling. Although it is debatable whether this was a direct reference, the similarities are clear.

Brain Power(e)d is a 1998 mecha anime by Yoshiyuki Tomino. Two rumors related to this series sometimes pop up in Evangelion discussions: the first of these is that Tomino intended Brain Powered to be his response to Evangelion, or even "Evangelion done right"; a second, corollary rumor is that Tomino loathes Evangelion and/or Hideaki Anno.

The latter rumor appears to, at least to some extent, stem from a particular Tomino interview in the Animerica magazine (Vol 8 #2, March 2000), parts of which touched the subject of Evangelion:

As is apparent from this, the first rumor is patently false: Brain Powered was never intended as a reaction to Evangelion. The second rumor has more substance to it, as Tomino clearly finds Evangelion lacking in the way of social conscience (cue the debate about how correct or incorret his interpretation of Evangelion's message is).

Cosplay Complex, a 3 episode OVA released in May of 2002, has a character, Jenny Matel, who went around repeating "I mustn't run away!" over and over again, like Shinji does, during the beach episode. In the beginning of episode 3, there is a shot of a medical monitor that is taken from the beginning of End of Evangelion, where there is a medical monitor in Asuka's hospital room. 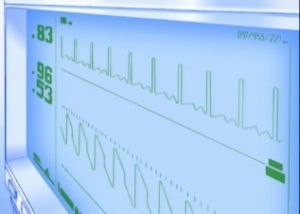 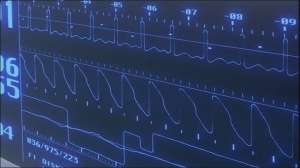 Medical monitor from End of Evangelion in Asuka's room for comparison

Also, in episode 1, Gourou, the president of the cosplay club can be seen doing a Gendo Pose. 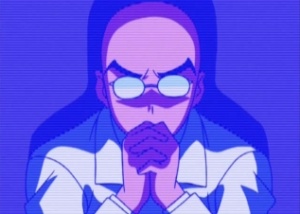 In the last episode (26) of Excel Saga, Hyatt falls over on the sidewalk, starts to bleed, and continues to bleed, covering the earth in blood, which looks similar to the start of Third Impact in End of Evangelion. 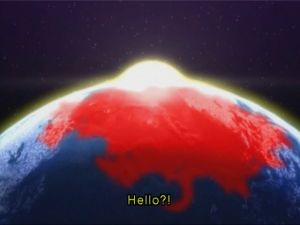 In the Full Metal Alchemist manga in Chapter 75, as all the souls in the town are being collected, an eye similar to the one seen in End of Evangelion when the black moon rises out of hakone can be seen rising out of the ground. 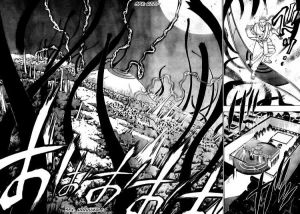 Giant eye rises out of the ground as souls are collected

In episode 8 of Full Metal Panic! The Second Raid, there is a scene depicting the bridge that looks very similar to the Nerv Command Center. While the basic bridge layout isn't that unique, an intentional homage is not out of question, especially when considering Kyoto Animation's fondness for references. 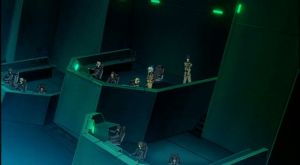 Bridge similar to the Command Center

In the first season of Galaxy Angel, episode 24, Mint is explaining to the rest of the crew that the attacking Dice is heading straight for their ship (marked as <Angel>). This makes their ship look suspiciously like Ramiel. 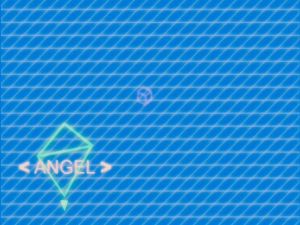 An octahedron-ish shape labeled as <Angel>

In episode 16 of Galaxy Angel A, the third season, there's a short clip of Ranpha Franboise dressed in a school uniform with toast in her mouth repeating "I'm late, I'm late, I'm late," followed by her running into Forte, falling to the ground, then covering up her skirt when she realized she was possibly exposing herself. 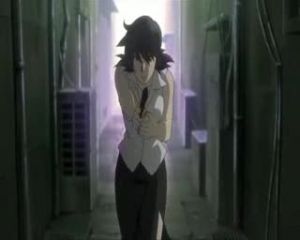 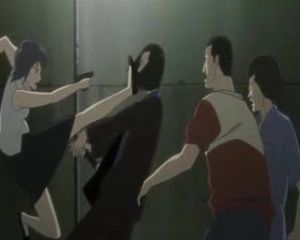 In the first Hanaukyo Maid Tai TV-series, an angelic Rei Ayanami makes a cameo in episode 1 as a statue when Taro first enters the mansion. In episode 3, the techie maid and an outspoken anime fan Ikuyo makes a vague reference to Evangelion. 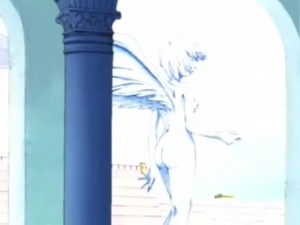 An angelic statue of Rei Ayanami 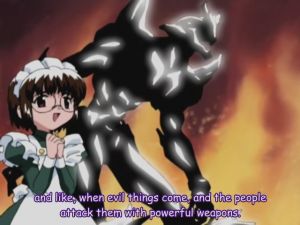 The last two episodes of Hyakka Ryōran Samurai Girls, a 12 episode TV series produced by ARMS, contains a set of shots that have similarities to elements of Evangelion. 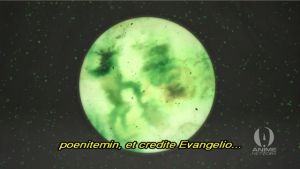 Near the beginning of Episode 11, some scriptures (here Evangelio = Gospel) 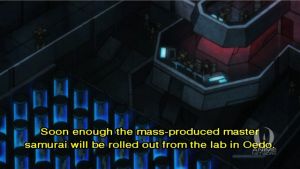 Also in Episode 11, a panning shot of the Command Bridge

In episode 12, there is a use of a starfield during an out-of-body sequence. 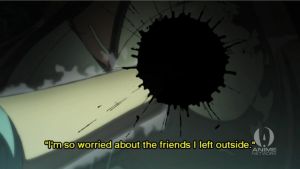 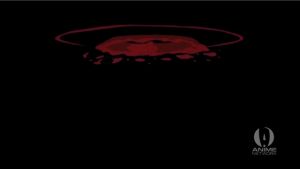 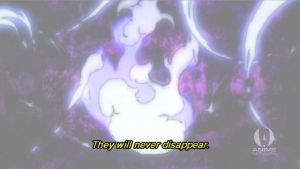 The momentary blue flame accompanied by a heartbeat sound

Lucky Star, an anime by Kyoto Animation that aired in 2007, in episode 6, Kuroi-sensei mimics the way Misato drinks beer.

In episode 1 of the Nurse Witch Komugi OVA, there was a giant Hikkii (a virus, and also happens to be the cat mascot of 2ch) that Komugi has to fight, which happens to have power cable attached to its back similar to the Evas. Eventually, Komugi defeats the Hikkii by cutting the cable.

Puni Puni Poemy, a 2 part OVA released in March of 2001, there is a massive alien mecha that attacks the city. One of the legs of the alien mecha belongs to Evangelion Unit-01. 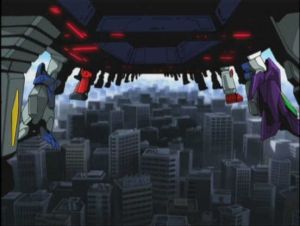 A short 3 episode OVA that was directed by Hideaki Anno in 2004. About 30 minutes into the first episode, when Honey Kisaragi does her Honey Flash, there is a set of flashes over a black background that is very similar to the ones seen in the Neon Genesis Evangelion opening. 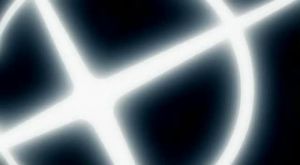 In episode 3, at the very beginning, there is a water drop motif similar to the water drops often used throughout Neon Genesis Evangelion to segue between the "real world" and the "internal world."

The opening animation of this two-episode OAV from 2003 was directed by Hideaki Anno. As an apparent nod to Evangelion, the motto that was used in Nerv's logo, "God's in his Heaven, all's right with the world," makes a (slightly misspelled) appearance in it. 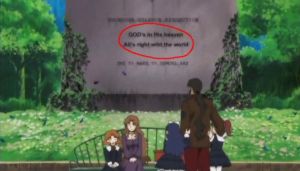 Although this is a debatable tribute, during an episode of Trinity Blood, an anime that aired in April of 2005, one of the vampires produces something that looks like an A.T. Field. 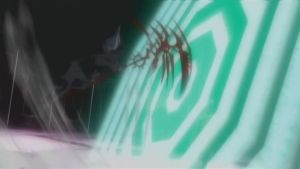 In episode 10, the contestants of a pool-side "Kid's Animal Quiz Competition" look very similar to Gendo, Yui, and Shinji. 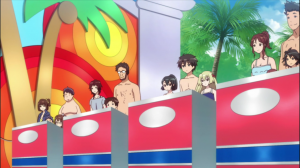 The contestants 2nd from the left

Similar to the Gendo Pose, The Pyramid as seen by the Nerv pyramid and in End of Evangelion's sandbox, has appeared in many other anime and manga, but cannot always be confirmed as a reference, since this particular three dimensional shape has existed for millennia. Some instances of the pyramid are more obvious an Evangelion reference (particularly to the sandbox scene), while others may simply be just a pyramid.

In Gravion, the official residence of the president of the Allied Governments is a pyramid with an adjoining tower. The reference status of this similarity is reinforced by the fact that when we see the president in the very next shot, he's doing the Gendo Pose. 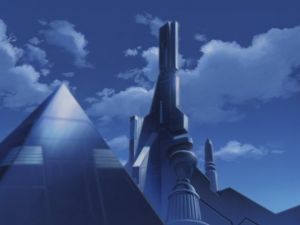 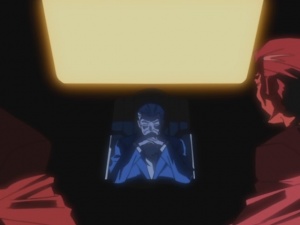 The president, doing the pose

While the class was in Okinawa, Yoshikawa can be seen building a sand castle similar to child Shinji's sandcastle (a pyramid) in the Sandbox Sequence in the End of Evangelion. 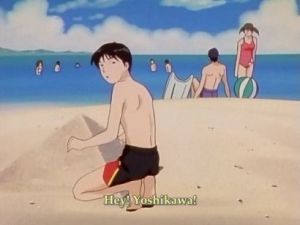 Yoshikawa's pyramid made of sand

References in the January 2002 show RahXephon are usually a very hot topic for debate. But for the purposes of this section, 2 pyramids can be seen throughout the series, but cannot be confirmed as references to Evangelion. 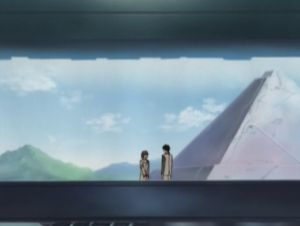 The Pyramid where the Xephon launches from 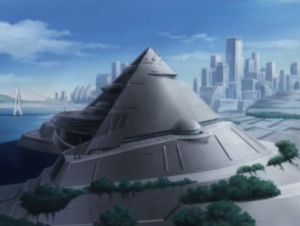 The Pyramid that is the command center

Yakitate! Japan (manga) by Takashi Hashiguchi and serialized starting in 2002 and getting a U.S. release starting in September of 2006, in the U.S. release volume 10, chapter 83, page 6, during Pierrot's flashback on a beach, his child self can be seen building a sandcastle, which turns out to be a pyramid and includes a frame very similar to the Sandbox Sequence in the End of Evangelion. 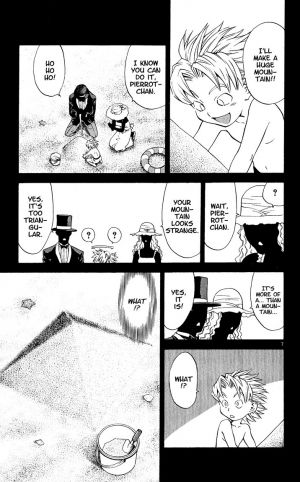