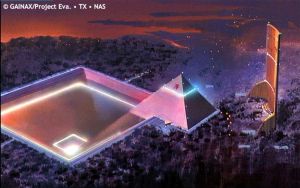 Nerv H.Q., inside the GeoFront

Nerv[1] Headquarters (Nerv HQ) is Nerv's sprawling primary base of operations. Built in the subterranean GeoFront cavern under Tokyo-3, the base was mostly completed by the year 2003. It is the command center for all of Nerv's global operations . The operational focal point of Nerv HQ is the Command Center and the S.C. Magi System.

Tokyo-3 was constructed as a fortress city to protect Nerv from the oncoming Angel threat. The city was designed with the deployment of Evangelions in mind as elevators, power sockets, and weapon caches are strategically placed around the city. According to Gendo Ikari in Episode 21, "all the resources mankind has to offer are being poured into that facility," it is truly the last hope mankind has against the Angel threat.

The tip of the iceberg, so to speak, of Nerv HQ is the black pyramid that juts into the GeoFront. The black pyramid has an inverted pyramid leading off of it[2] that acts as a reservoir for the base's water needs. Towards the top of this pyramid is Nerv Commander's Office, which has a Tree of Life diagram as well as a image of atomic trails from inside a bubble-chamber.

There are 18 reinforced windows within the superstructure of Tokyo-3 that allow the GeoFront and Nerv HQ to be bathed in natural light.

The GeoFront has a number of train and car-train services that run into it, taking those onboard directly to Nerv HQ; the car train Misato and Shinji use Episode 1 is called the C-22 Special Express.

The central shaft leading down into Terminal Dogma has a spiraling-elevator that opens up onto hexagonal-shaped doors, while the other shafts located about the central shaft have automated pathways that run across their expanses at increments of 10 floors. 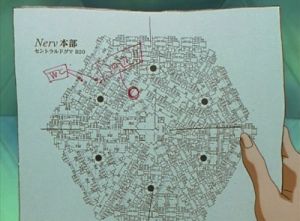 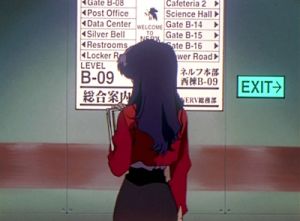 The levels of Nerv HQ are all designated in the elevators as "B-(level)"; i.e. we see Misato and Shinji pass by a sign on a wall that says "Level 20", and the elevator they are in designates this as "B-20" etc (the "B" is drawn in a fuzzy digital font causing some viewers to confuse it for an "8"). When Misato and Shinji are passing along a shaft (going through Level 20) that extends several levels down, Level 30 and Level 40 can be seen progressively further down the shaft. Thus, levels with higher numbers in Nerv HQ are deeper underground. Other maps show that different subsections of Nerv HQ have different letter prefixes ("A-15", "K-05", etc.), but the main subsection that the command center is located in appears to be a large hexagon-shaped vertical shaft with each level designated with the prefix "B-".

Misato's map indicates that Nerv's command center is located on level B-20, saying: "Nerv Headquarters: Central Dogma B20". Of course, Nerve's Commander Center is a massive room many levels in height, so level B-20 is presumably the level which Misato normally accesses it on. Misato has left a handwritten note in red ink on the map with an arrow pointing to the commander center, saying "this area!". Looking closely it can be seen that Misato has also left another note with arrows pointing to two other areas on the same level: "WC", which presumably stands for "water closet", that is, the lavatory (bathroom). When Misato encounters Ritsuko, she tries to hide the map behind her back out of embarrassment that she needs to use it.

Central Dogma appears to be arranged as a large hexagon, judging from Misato's map as seen in Episode 01.

The Evangelions are stored in the "Eva pens", of which there appear to be at least seven. A movable platform raises Evas up from the pens into the nearby launching catapults, which take Evas to the surface. The relation between these chambers and the Command Center was seen in Episode 19: Eva-01 emerged from an Eva pen on the right side of the Command Center, crashed through a wall, then pushed Zeruel through the left wall and into another Eva pen. As their brawl continued, Eva-01 pushed Zeruel from the Eva pen into a catapult on the wall. However, the arrangement of the shafts and the pens remains disputed.

In Episode 09 we get a nice shot of what is located on basement level 9, see image to right.

Central Dogma[3] is the codename for the primary subsection of Nerv HQ. Nerv's primary Command Center room is located inside, though there is also a backup command center located several levels down. Most of Nerv's major facilities are located in Central Dogma, including:

As Ritsuko takes Misato and Shinji down into Terminal Dogma by helical elevator. A small glimpse reveals the internal structure of the Black Moon, with strange honey-comb structures and large desolate spaces that are used as dumping grounds by Gehrin, and later Nerv.

A giant salt lake with stalagmites and a pink, sparkling canopy is what lies at the end of the central shaft leading into Terminal Dogma, leading off this huge space is "Heaven's Door," beyond which is the room where Lilith is crucified, and presumably restrained, on a red [cross|tau cross]. About Lilith are heptagons with radiation symbols at the center of each. Lilith's perpetual bleeding of LCL forms an entire sea of LCL, deep enough for a UN frigate to patrol in and deep enough that it comes up to the waist of an Evangelion.

For information on the Special Duty Organization Nerv and its branches around the world see the Nerv article.