Misato is upset with Shinji for ignoring her orders in the last Angel battle, and he is so overcome by the stress of being an Eva pilot that he runs away. After wandering around Tokyo-3 for several days, Shinji is faced with the choice of quitting or staying in his new home. 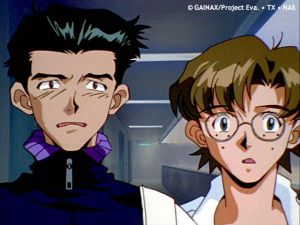 Toji and Kensuke see Misato for the first time

It's been five days since the battle with Shamshel, and Shinji still hasn't returned to school. Misato knocks on his bedroom door and tries to persuade him, only to find that he has run away[2]. Misato admits to herself that she is not too surprised by this. Concerned about his absence, Toji and Kensuke come to visit and deliver the school assignments he missed out on. Misato lies and tells them he is training at headquarters. 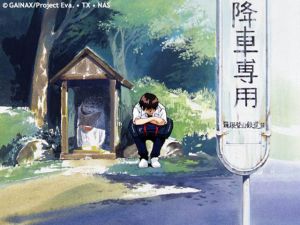 Shinji has just left the bus.

Shinji boards a local train and rides it all day, repeatedly listening to tracks 25 & 26 on his SDAT[3], leaving only when the train is taken out of service for the night. He tells himself, "I've got to go back", but instead attends a late-night showing of a movie about Second Impact[4]. The few other people there seem to be either sleeping or making out. He spends the night in the theater's lobby. The next morning he leaves the theater, but hallucinates that the buildings are closing in on him. Thus he flees to the countryside, and walks around in the fields and mountains surrounding Tokyo-3[5].

Back at Nerv headquarters, Ritsuko is subjecting Rei to a medical exam. Misato is there, and the two of them discuss Shinji as Ritsuko is working. Misato doesn't think Shinji wants to come back, and in her opinion it is probably better for him if he doesn't. Ritsuko asks how she have come to that conclusion, and Misato thinks Shinji because she upbraided him during the debriefing following the battle with Shamshel for disobeying her retreat order. In the flashback, Shinji smiles and acts rebellious at her scolding, saying he won the battle regardless. Back then Misato chewed him out for his attitude, but she since has realized in hindsight, that Shinji was just putting on a front, and was actually feeling scared and trapped. 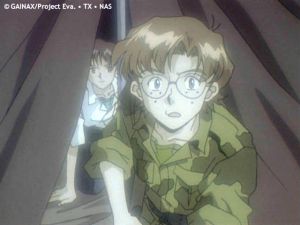 Kensuke stares in disbelief as M.I.B.s come to collect Shinji.

Meanwhile, in a violation of the law of incredible coincidence, Shinji meets Kensuke, who is in the wilderness playing survivalist[6]. He and Shinji discusses the recent events, with Kensuke explaining that Toji is sorry what he did, and that his sister even gave him an earful for beating up the hero who saved the city. Kensuke reveals that he is jealous, both because Shinji is living with a beautiful woman, and because he is an Eva pilot. When Kensuke expresses a desire to be a pilot as well, Shinji admonishes him that his mother would be worried[7]. Kensuke reveals that like Shinji, he has none[8]. Shinji camps out with Kensuke that night. The next morning, several men in black from Nerv arrive and take Shinji into custody. Back at school, Toji upbraids Kensuke for not doing anything about it. Kensuke, in turn, points out that it would have been downright idiotic to resist them, seeing how he is just a kid, and they were trained security agents. 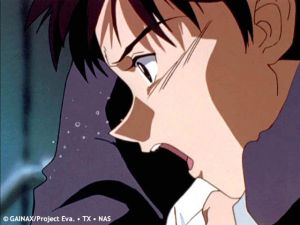 A M.I.B. has to restrain Shinji as he denounces himself.

Back at Nerv headquarters, Misato confronts Shinji, who is kept in a holding cell, asking if he wants to go back to piloting. When Shinji acts rebellious again, Misato grows frustrated and snaps at him, telling him they don't need a pilot with his attitude. Shinji elects to resign. Later, Ritsuko informs Gendo about this, who reacts with calm indifference and orders Unit-01 reconfigured for Rei. He then notes that Rei will have do for now, despite still being injured, as the Fourth Children has yet to be selected by the Marduk Institute.

Two men in black take Shinji to the train station, where Toji and Kensuke see him off, as they have so many of their other classmates. Toji is hesitant about something, but after a prompting nudge from Kensuke, he sincerely apologizes for punching Shinji and insists that Shinji has to hit back him to make up for the beating. Shinji is a bit reluctant, but Toji is insistent that this is the only way to make things right, so he hits him surprisingly hard for Shinji. With things squared, Toji explains to Shinji that his departure probably means that neither he nor Kensuke, or any other of their classmates will be able to stick around for long in Tokyo-3 either, but he doesn't blame Shinji for resigning, having seeing the toll being a pilot takes on him. Shinji finds himself at a loss for words, and before he can reply, he is told by the agents that his time is up. As he is being led away, Shinji shouts that he (Shinji) is the one who should be hit, for being so weak and cowardly.

Misato finally realizes that the reason that Shinji agreed to live with her was because he was looking for a family, and rushes to the station[9], seemingly too late. But Shinji hasn't boarded the train. They greet each other with "I'm home", "welcome home".