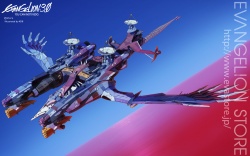 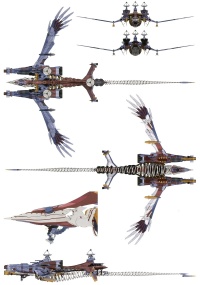 Various profiles of the vessel.

The AAA Wunder is the massive airborne flagship for the anti-Nerv organization Wille. The triple-A in front of its name stands for "Autonomous Assault Ark".

The Ark is under the command of Captain Misato and vice-captain Ritsuko Akagi, and is staffed by several former Nerv personel along with many newer recruits.

The upper portions of the Ark loosely resemble the hull of an aircraft or spacecraft. The underside of the ark resembles an enormous spiraling ribcage, which can be seen through. It is not clear to what extent the Ark is fully mechanical, or partly cybernetic. The spiral section of the Ark from the "ribcage" to the "tail" strongly resembles a Spermatozoon. The Ark, viewed from above, resembles a winged "Caduceus" staff of the sort used by the Greco-Roman God Hermes/Mercury.

The Wunder's main engine block lies inside the "ribcage" structure, and is a large oval shaped structure which bearing a strong resemblance to the "pod" which Eva-13 is constructed in. Several large cables are attached to the underside of the oval, and travel upwards into the central wing. The deep interior of the oval appears to be organic in nature. If the "ribcage" part of Wonder is indeed modeled after a Spetmatozoon, this region would coincide with the nucleus.

Somewhere inside the oval, Evangelion Unit-01 is being used as the Wunder's primary power source. Wille appear to have recovered the Evangelion to use it in this role. Eva-01's is surmised to be the source the Ark's AT Fields and levitation capabilities. During Fourth Impact the Vessel of the Adams attacks itself to the outside ribcage and tends blue tendrils down onto the oval in an attempt to take control of the Ark from Eva-01. Ritsuko says that the Vessel of the Adam's is the Wunder's "true master".

Above the oval, on the Wunder's upper hull, sits a huge flywheel, which was charged prior to the main engines ignition. The flywheel appears to act as a starting motor for the main engine, or possibly a power converter. The flywheel was itself charged using N² Reactors, salvaged by Wille from the Nemesis Series. Surfaces similar to the flywheel interior are seen inside the oval.

Wille did not have time to install the main engine's ignition system prior to the Nemesis Series' attack. As a result, Eva-02' is required to manually ignite the engine by cutting into the engine block and lighting the engine's organic looking innards with an electrical tong-like device. After ignition, Eva-02' narrowly escapes the resulting explosion, and is required to leave behind its left arm which begins to "turn to core".

The Wunder's bridge is composed of two sections. The lower section is situated fore-wards of the main engine, in a gondola beneath the Wunder's central bow. The chamber is approximately spherical, with several large red viewing ports. Most of the chamber is taken up by the Hirnstamm tower(Hirnstamm: German for 'brain-stem' ), a large set of platforms on suspended on hydraulic arms, on which the bridge crew have their stations. Similarly to the old Nerv Command center, the lower bridge features arrays of holographic displays. To the rear of the chamber lies at least one of the Wille's MAGI Achiral supercomputers, and behind this there is a morass of cables and pipes.

The upper bridge section lies above the gondola, inside the "beak" of the bow. The entire Hirnstamm tower is capable of being transferred upwards into a huge spherical "Anchoring plug", which appears to be effectively a large Entry plug. This sphere spirals up into the bow, and after is filled with LCL which when charged activates an omni-directional view-screen which the crew uses to pilot the ship. It is not known whether or not the crew is in fact synchronizing with the ship during this process.

The Wunder is equipped with at least two evangelion cages, situated on the fore of the engine nacelle blocks. The cylindrical cages feature rotating outer walls, which can open either downwards or outwards. Eva-02's cage is on the starboard nacelle, and Eva-08's is on the port nacelle. The cages can be opened underwater or when the Wunder is in flight. The cages also contain umbilical cables, to connect the Evangelions to fixed power supplies.

Maintenance chief Maya Ibuki can be seen in issuing orders in the control room of the port cage. Ibuki appears to be responsible for the Evangelion launches.

The wings of the Wunder are enormous, with an apparent span of a kilometer and a half (or just under a mile). They also feature extensible metallic wingtip "feathers" while in flight. After being pierced by an attack from the Nemesis series, the wings are seen to "bleed" a spray of what appears to be blood. The wings themselves do not appear to be responsible for the Wunder's levitation, but could have something to do with its maneuvering.

The exact cause of the Wunder's levitation is unknown, though certain observations can be made. When the Wunder first launches, two large concentric halos appear below the Ark. In addition, thin strands of light can be seen on both the Wunder and it support fleet, resembling threads holding them aloft. Several threads can be seen on the Wunder itself, some at oblique angles.

The Wunder's engines are housed in huge nacelles over the main wings, and are capable of firing in both fore and rearward directions. The fore engines are smaller and use the same AT Field based propulsion technique seen in the Mark.04A units. The rear engines are large, and give the impression of expelling exhaust, but may be based on a similar system.

During flight, the Wunder can be heard "howling" or moaning. This occurs when the ship first launches, as it strains to pull the Mark.04C's, and when it tries to contain Eva-13 in its AT Field.

The Wunder's main weapons are four large adjustable cannons, mounted above the engine nacelles. These are capable of being loaded with at least two types of ammunition. An energy penetrating ammo used against the Mark.04C units, and mortar shells which are capable of being "ricocheted" off the Wunder's own AT Field for inward firing.

The Wunder also possesses an AT Field of its own. Aside from the propulsion mentioned above, the AT Field can be seen defending the ship from Eva-02's self destruct explosion, allowing the Ark to emerge mostly unscathed even though the Vessel of the Adams is destroyed. The Wunder also uses the AT Field to try to contain Eva-13; this manifests in hoops and a glowing sphere surrounding the Eva.

Other Locations on the Ship

After the Nemesis series attack, Shinji is taken to meet Misato, Ritsuko and Asuka in a makeshift quarantine room, situated on the starboard side of the central bow, close to the central wing. A glass screen separates them, but supply boxes can be seen stacked up on both side of the room. Later, Eva Mark.09 breaks through the wall of the room and Shinji escapes within the Eva's hand.

In Evangelion 3.0, Shinji first wakes up inside a red-lit containment chamber, surrounded by Angel-sealing Hex Pillars. This chamber may be somewhere on board the Wunder, though this is not certain.

The Ark appears to posses an internal monorail/elevator/turbolift system. Shinji is seen being transported under guard inside said system, as he is taken towards the bridge.

During Mark.09's attack, Asuka is seen running inside rather cramped corridors, surrounded by pipes and cabling. The corridors are lined with red panes, outside of which lies even larger piping. Traffic cones, various equipment, and even a bicycle can be seen in the corridors as Asuka runs by.

The Crew of AAA Wunder consists of the Wille staff and a number of ex-Nerv veterans, but is partially made up of inexperienced civilians.[3] 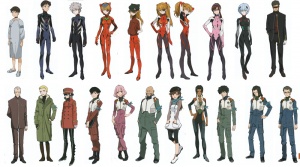 Bridge Staff starts from Ritsuko and extends to the right

The Bridge Staff are as follows.

Various maintenance crews are seen within the Wunder and as part of its support fleet. The ship also has a security force of some kind. Almost all crew members appear to wear a blue sash tied around their left arm. The exceptions to this are Sakura who wears the sash around her neck, and Misato and the two Eva pilots who wear no sash at all.

It appears that Wille suffers from a chronic shortage of manpower. Many of Wille's personnel --even on the bridge -- are very inexperienced and untrained. Several of its support vessels appear to be largely or completely automated. Moreover, Wille priorities transfer of its personnel over supplies once the Nemesis Series attacks.

It is unknown at what point the AAA Wunder was constructed. It may have been built sometime in the 14 years between 2.0 and 3.0, but specifics are currently unknown.

Nature of the Wunder

It is currently believed that the Wunder is Angelic in nature. When the Mk.09 takes over the control systems, Ritsuko remarks that the Eva was the Wunder's "Original Master". The bridge gondola of Wunder strongly resembles the Mark.09's regenerated head with its multiple rows of eyes. Although there was speculation in the Forums that parts of the Third Angel or the as-yet-unseen Eleventh Angel were used in the construction of the Wunder, these claims have not been proven.

The Wunder seems to be partially cybernetic. It's wings are seen to "bleed" during the Mark.04C's attack. The central bow and underside hull of the Ark also resemble the skull and ribcage of a vast bird or reptile. Moreover, the ship "howls" during flight.