From EvaWiki
(Redirected from Nadia)
Jump to: navigation, search

Images and themes from Gunbuster, Hideaki Anno's directorial debut, turn up in more than one place in future Gainax productions, as noted below. There are some moments from Gunbuster that did get recycled direct into Evangelion.

Nadia: The Secret of Blue Water (1990) was Hideaki Anno's second anime series. The show heavily references his previous work, Gunbuster, but it also contains plenty of elements that later found their way into Evangelion. These include things such as

The Nadia fan-site has a section that lists most of the smaller, more specific references, like Anno's penchant for telops and panoramic floors, Jean hailing the greatness of air conditioning, the Kermadec probe and shameless cross-series frame recycling. However, the list also contains some dubious, speculative and outright stupid forced similarities ("deep" character comparisons, Leliel = zebra?), so visitors are advised to proceed with caution.

The third Rebuild of Evangelion movie, Evangelion 3.0: You Can (Not) Redo also contains significant but subtle references to Nadia: The Secret of Blue Water. Some of the more notable of these include:

The date of Second Impact, September 13th, comes from Otaku no Video (おたくのビデオ), a 1991 pseudo-documentary anime about the history of Studio Gainax and Japanese otaku in general: Otaku no Video in turn took the date and the backstory of the nuclear disaster from Gerry Anderson's classic 1975 science fiction series Space: 1999. Evangelion simply changed the year from 1999 to 2000.

Throughout Otaku no Video, placards with dates of (more or less) important world events are used to mark the frequent time skips in the show. The following translations of the placards are from AnimEigo's DVD subtitles:

In the epilogue set in 2035 Tokyo has been flooded by raising sea levels, much like in Evangelion. Battleship Eltrium is a reference to Gunbuster. Other references to earlier works by Gainax staff include snippets of Daicon IV opening animation and Hideaki Anno's key animation sequences from Super Dimension Fortress Macross. A comprehensive list of the references can be found in AnimEigo's liner notes.

Hideaki Anno has made multiple uses of what has been dubbed the "Orphan Conversation." Which always ends with some variation on "we're the same." We are placing this in its own section because it has both forward and backward looking references.

From Nadia: The Secret of Blue Water (Anno's series before Evangelion):

(Jean and Nadia have just escaped from the Grandis Gang and are traveling down river by boat.)
Jean: "Where will you go now? Back to the circus?"
Nadia: "I can't go back."
Jean: "What about your folks?"
Nadia: "I don't have any."
Jean: "I see. It's the same with me."

(Shinji has met Kensuke in the wilderness.)
Kensuke: "I really envy you. Living with such a beautiful woman and getting to pilot Evangelion. Oh, I wish I could get behind the controls just once!"
Shinji: "You'd better not. Your mother would be worried."
Kensuke: "Ah, that's okay. I don't have one."
Shinji: "Ah…"
Kensuke: "I'm the same as you, Ikari."

From Kareshi Kanojo no Jijo, aka Kare Kano, aka His and Hers Circumstances (Anno's series after Evangelion): 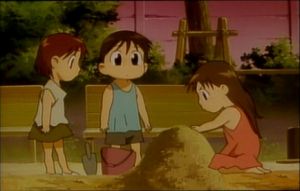 The kneeling girl pats the sandpile 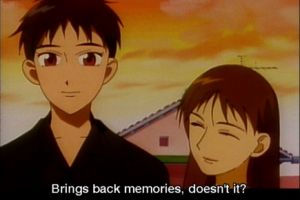 Brings back the memories? It sure does!

(Yukino's parents, Hiroyuki and Miyako pass by three children in a sandbox with the ubiquitous pail and shovel.)

Diebuster, or Gunbuster 2, is an OVA from 2004 by Gainax. In episode 6, the final episode, there is an overt reference to Gendo putting his hand over Rei's left breast and it going inside her body. 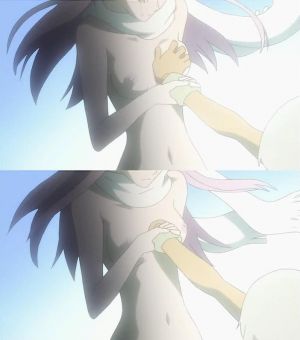 Hand over left breast, then goes into body

In the second episode of the series, main character Naota Nandaba remarks that his father, Kamon, "wrote an ‘Eva’ book a long time ago." 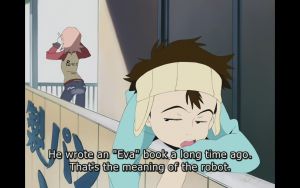 In the third episode, Naota’s teacher "Miya-Jun" (Junko Miyaji) is seen wearing bandages similar to Rei Ayanami’s after an accident. 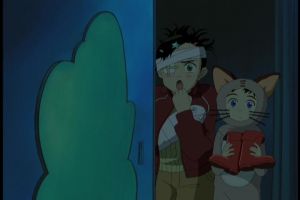 Hanamaru Kindergarten is a 12 episode TV show by Gainax about a preschool that revolves around teacher Tsuchida and 3 of his students.

Misato Katsuragi's Renault Alpine A310 appears in episode 4 as a toy car: 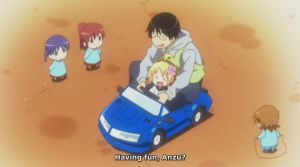 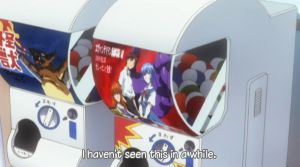 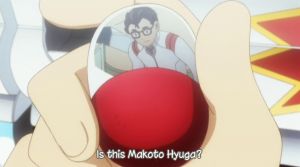 He gets a Makoto Hyuga

He tries it out and gets a Makoto Hyuga toy. He keeps putting money into the machine hoping to get a Rei Ayanami. 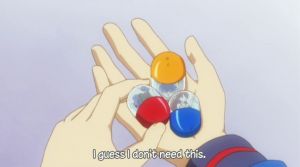 He decides to throw one away

Later on, he decides he doesn't want one of them. It looks like he has an Asuka one in his hand as well. 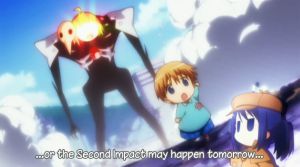 What if 2nd Impact happens?

During the second half of Episode 5, Hiiragi is listing the possible reasons of a schoolmate, Yu, leaving as a reason for Koume to confess her feelings for him.

He Is My Master (これが私の御主人様)

From the anime He Is My Master, a 12 episode TV show by Gainax, there is a scene in episode 8 where several female characters from different productions of the studio show up as chibi-dolls on a shelf. The characters are: 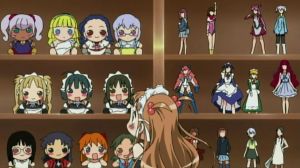 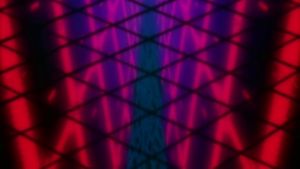 The inside of the computer room from Episode 2 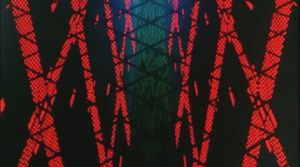 The inside of the Magi from End of Evangelion

His and Her Circumstances (彼氏彼女の事情)

His and Her Circumstances is a 26 episode romance show produced by Studio Gainax airing from October 2, 1998 to March 26, 1999, and directed by Hideaki Anno. Many stylistic choices in the show are similar to that of Evangelion, with cloud-like inner monologue scenes, clipshows, spotlights on characters and their problems, and questions being asked by themselves written on a screen.

In episode 1, Yukino holds an object in her hands, similar to the way that Rei holds Lilith's Black Moon during Human Instrumentality in EoE. 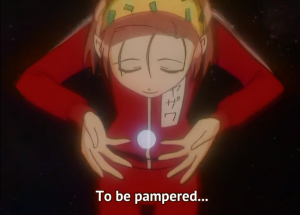 In episode 11, Yukino reflects upon people she has met in her life, with many flashing frames of Evangelion characters.

In episode 23, Yukino starts riding the bike by saying "Unit One... Here we go," while looking up in a manner similar to the way Shinji looks up. 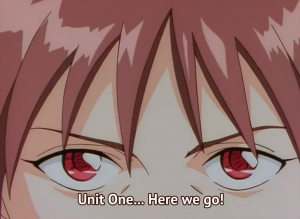 Magical Shopping Arcade Abenobashi is a 13 episode series by Gainax that aired in April of 2002. In episode 3, when Satoshi realizes what's going on in this world, you can see grey Evangelion Unit-01 floating in space in the same fashion at the very end of End of Evangelion, with flowing hair. When Satoshi gets to pilot a combiner robot, the Evangelion background music, Decisive Battle, can be heard in the background.

During the brief flash of the "Anime Pyramid," you can see Eva-01's head in the 3rd tier. Other notable anime references here include mechs from Mobile Suit Gundam and Mazinger Z, Space Battleship Yamato, Tetsuo from Akira, the Scopedog from VOTOMS, a guardian robot from Laputa: Castle in the Sky, and what seems like the robot Godmars. Other non-Eva related references in this episode include, among other things, several scenes spoofing 2001: A Space Odyssey and Ideon, a space station that looks exactly like Ultraman's face, references to Leiji Matsumoto's works, Gaiking, etc.

Medaka Box, a Gainax TV series from Spring 2012, is a fan-servicey school action/comedy. In the second season's episode 6, while Zenkichi Hitoyoshi is banging on some emergency shutters and wonders if they are "hiding an Evangelion" behind the shutters:

Zenkichi Hitoyoshi wonders what they're hiding behind the shutters

Tengen Toppa Gurren-Lagann is an anime by Gainax that aired in Japan from April to the November of 2007. In episode 6, the animators were said to have "gone crazy,"[2] dressing several females from other Gainax shows in bunny outfits similar to the Daicon III and IV animations, and then putting them in a bathhouse. The girls are, from left to right, Rei, Mahoro from Mahoromatic, Nono from Diebuster, Asuka, and Lal'c from Diebuster. 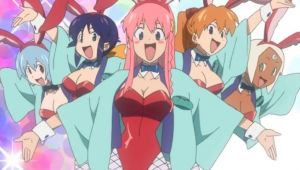 In episodes 24 and 26, Nia is depicted as a giant white figure in space. This is a possible reference to the giant Rei from End of Evangelion. 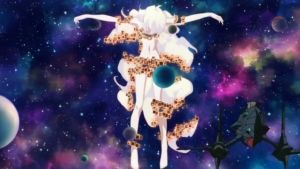 This Ugly Yet Beautiful World (この醜くも美しい世界)

In episode 9 of This Ugly Yet Beautiful World, a 12 episode series produced by GAINAX (amongst others), the foriegn lush, Jennifer Portman, mimicked Misato drinking a beer. Normally, a chug and a yelp would be considered an unconfirmed reference. However, this one used nearly the same framing, camera angle, and motions as Misato, and being a show produced by GAINAX, it's very possible that this was an intentional tip of the hat to Evangelion. 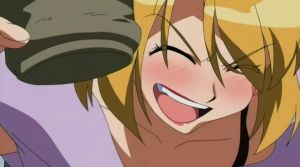 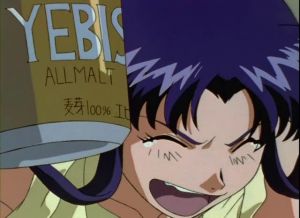 Comparison shot of Misato in Episode 02

Kill la Kill is an anime made by Gainax alumni- namely the Gurren Lagann creators, Hiroyuki Imaishi and Kazuki Nakashima.

Episode 12 features main characters Ryuko Matoi and Senketsu going berserk in a scene that is laden with both Evangelion and Gurren Lagann references. Notable examples of this are Senketsu's eyes turning into spirals, and Ryuko turning into a blood-stained monster that resembles a berserk, bloodied Eva-01.

In episode 6, we are treated to an exposition story of how a character was consumed during a "contact experiment" with life fibers. The consumption scene is garnished with the sparkly crosses which are the hallmark of life fiber activation, but that also bear a strange resemblance to the crosses from End of Evangelion.

Tearing your way out from inside

Ryuko tears off Junketsu from her body in Episode 21 in a manner nearly identical to the berserk Eva-01 tearing its way out of Leliel in Episode 16. She then stands drenched in her own blood while a shower of blood rains down upon her.

Ragyo thrusts her hand into Ryuko's chest in episode 18, much in the same way that Gendo does to Rei in End of Evangelion. Ragyo also does this to herself in episode 24.

Ripping open an A.T. Field The scene where Gamagoori tears through the transmitter's barrier in Episode 24 is a direct reference to Eva-01 tearing its way through Sachiel's A.T. Field. The shot of Gamagoori from the back as he tears through the barrier and the image of his hands as they pull it apart are very obvious references.