The list of small arms, weapons used by the JSSDF or Nerv from the End of Evangelion movie and the TV Series. Handguns, rifles, and other small arms were seen throughout the show along with the myriad of Evangelion Weapons and heavy munitions such as N² Weapon. A lot of detail and consistency has been put into the animation of these weapons, as can be seen in the comparison pictures of the actual firearms.

This list was originally compiled by The Internet Movie Firearms Database[1].

The Browning Hi-Power[2] is the standard-issue sidearm used by JSSDF commandos during their invasion of Nerv during Episode 25'. It is the 1940's Inglis No 2 Mark I, built in Canada for the Allied forces, because of the large hump rear right and dovetailed front sight. 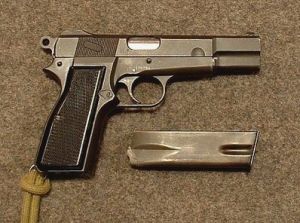 A JSSDF Soldier about to execute Shinji

The Glock 17[4] is used by Nerv personnel. During the JSSDF attack, Hyuga retrieves a Glock 17 from his desk. He nervously checks the gun saying to himself "safety off", although the Glock 17 has no external safety. It's possible that this was added by the English dub because the original Japanese apparently doesn't have an equivalent line (unless there's an outside chance he mutters it under his breath), and "safety off" was added to match his lip-flaps when he was talking.[5] 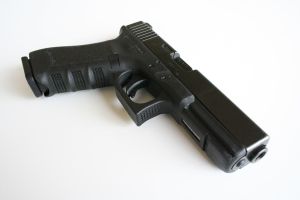 Misato Katsuragi's gun is the HK USP[6]. She uses it several times during the TV series and during the movie as well as in Yoshiyuki Sadamoto's Evangelion Manga. Misato's USP has a rubber grip on the handle and can fire at least 10 rounds in succession, as seen during the movie when she takes out the 3 JSSDF soldiers that were about to kill Shinji. According to Evangelion Chronicle, Misato's USP is chambered to fire a .45 ACP round. 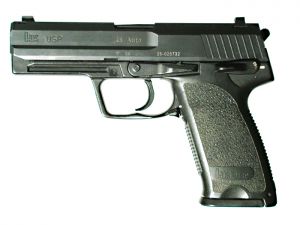 Misato readies her gun as she goes to rescue Shinji 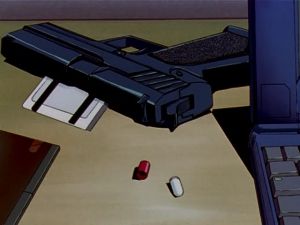 Misato's gun on her desk in Episode 23

Ritsuko uses a Russian R-92 Revolver as seen during Episode 25' when she points it at Gendo (and Rei Ayanami standing behind him) as she is about to cause the Magi to self destruct. 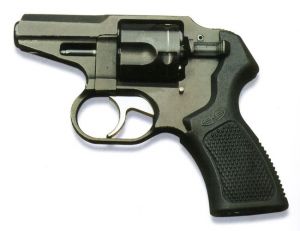 The Heckler & Koch MP5A3[7] sub-machine gun is briefly seen during Episode 23, carried by the Nerv HazMat recovery team sent to salvage Evangelion Unit-00's Entry Plug. The MP5 and its variants are an extremely popular line of sub-machine guns that was originally sold to German police and border guards in 1966, and since then as come to be used by far too many security forces across the globe to be listed here. The MP5 is usually chambered to fire the 9x19mm Parabellum[8] round, but there are variants available that can fire 10mm Auto[9] or .40 S&W[10] rounds. 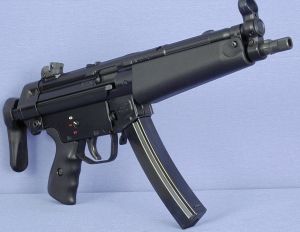 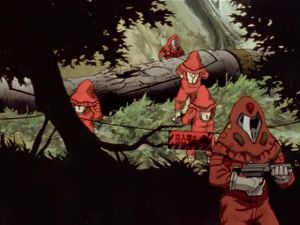 The Steyr MPi 69[11] is used by Nerv personnel. The Nerv security personnel (who were easily overwhelmed by the JSSDF) in Episode 25' and Aoba are seen carrying these sub-machine guns. According to Evangelion Chronicle, Aoba's SMG is not a Steyr MPi 69, but a fictional mashup of the MPi and the Russian AEK-919[12]. 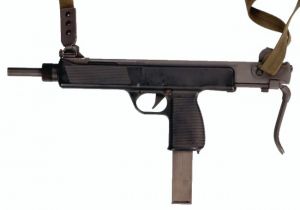 A Nerv security personnel and his Steyr MPi 69

The Heckler & Koch G11[13] assault rifle was used by the JSSDF invasion force during the beginning of Episode 25'. The G11 was developed through the 1970's and 1980's, and eventually culminated in the G11K2 production model being tested in 1989 with 1000 units being delivered to the Bundeswehr (West German Army) in 1990.[14] Although the program was later canceled, the rifle was considered advanced for its time which may be why it was used as the JSSDF's primary assault rifle (which takes place in 2015). Also note that the G11K2 fires DM11 4.73mm caseless ammunition (see picture) and that during the movie when the JSSDF soldiers fire the rifles, no casings are expelled.[15] 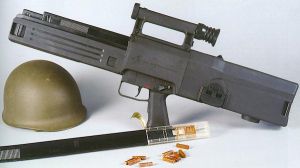 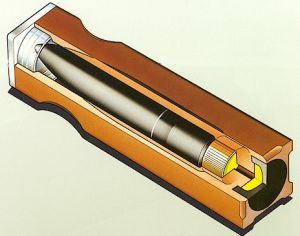 A cutaway of the DM11 4.73mm caseless round. Note the block-like design

A JSSDF soldier uses an American M2 flamethrower[16] to flush-out and kill Nerv personnel in Episode 25'. The original M2, and its successor the M2A1-7, were both long retired by both American and Japanese forces by the time Evangelion was in production. However the JSDF did replace their M2A1-7s with a Japanese-made flamethrower based on the iconic American weapon that is still in use today, and it is likely the version used by the JSSDF. 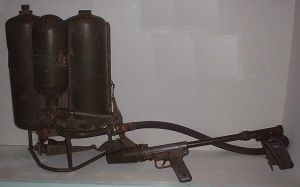 The Panzerfaust 3[17] antitank rocket launcher that fires a 110mm rocket from a 60mm barrel. There are several versions of the weapon that fire a variety of rockets that range from tandem charge HEAT (High-Explosive Anti-Tank) rockets to multi-purpose "bunker buster" rockets. The weapons system was developed in Germany, but is also license produced in Switzerland and the Republic of Korea (South Korea). The JSSDF uses this weapon several times during their assault of Nerv in Episode 25'. 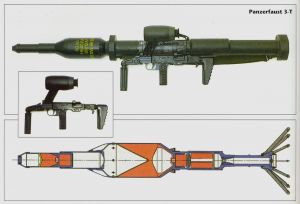 Another shot of the Panzerfaust 3

A JSSDF soldier firing a Panzerfaust 3