From EvaWiki
(Redirected from Aoba)
Jump to: navigation, search

First Lieutenant Shigeru Aoba is one of the three main computer technicians at Nerv HQ, along with Makoto Hyuga and Maya Ibuki. 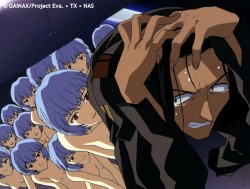 Aoba cowers in fear as the Rei collective comes for him.

Aoba is an avid guitar player, and has been seen carrying a guitar case when in civilian life (Episode 11). Even in Nerv Headquarters, he has been known to play air guitar when he is not on duty, or to read guitar magazines.

Although he is able to get along well with his co-workers, Aoba is portrayed as a bit of a nihilist, scoffing at Maya Ibuki's absolute faith in the technology of the age (11, again), and having no second thoughts about firing on JSSDF soldiers in Episode 25'.

Intriguingly, during Third Impact, the transition guides appeared to everyone around the world as a person they loved or trusted, their touch transforming the person into LCL. Aoba, however, experienced only a multitude of naked Rei Ayanami messengers, from which he cowered under his desk until he was touched, implying that there was no one that he truly loved or trusted. There is no known connection between the tank Rei copies and Aoba, so the reason behind this particular manifestation remains a matter of speculation.

Aoba reprises his old role in Rebuild of Evangelion, with little to differentiate him from his appearance in the TV series in Evangelion 1.0 and 2.0. However for Evangelion 3.0 he appears alongside Hyuga on the bridge of the AAA Wunder.

Aoba in Other Media