After being abandoned by his father, Shinji was sent to live with with his ‘‘sensei’’. He described his life there as a "peaceful" one, where he did nothing but exist and "nothing ever happened" [1]. Aside from Shinji's words on the matter, and rare allusions throughout the series, nothing is known about Shinji's life and childhood prior to the series's events.

Like all the characters in Evangelion, Shinji has a very complex and layered personality. At the start of the series, Shinji initially appears somewhat passive, with a superficially polite but melancholic disposition. He has a tendency to consider himself less important or deserving of respect than other people[2]. Possibly as a result of such self-loathing or devaluing (combined with the likely fact he had very limited social interaction in the days he lived with his "sensei"), Shinji feels at odd or completely distance from humanity, feeling that he can't relate to anyone and that no one could understand him.[3]

Shinji's feelings about other people are generally rather ambiguous and subject to development and change throughout the series. On one hand, he seems to be afraid of other people and the emotional harm they might bring to him (combined with a pervasive fear of being hated or abandoned), but on the other he also finds himself yearning for their praise and acceptance (possibly as an attempt to "feed his weak ego"). This conflict of a fear of pain vs. a desire for praise is one of Shinji's most noticeable and recurrent characteristics. It is also worth nothing that his feelings of self-hatred and worthlessness also play a factor into his fear and distance of others, among other reasons because he's afraid he might end up hurting them. Despite the cynicism he sometimes expresses about his father, Shinji wants Gendo's love as well[4].

But because Shinji cannot find a reason to pilot for himself, he subsumes his entire identity in the act.

Shinji is also afraid of pain, of being hated, and/or left behind, which particularly manifests in his pervasive concern with the potential hurtful or offensive consequences of his actions. This might stem from being "abandoned" at a young age by both of his parents (though his mother, in truth, hadn’t gone far), and his blaming himself for not being good enough to make his father stick around. 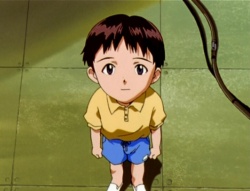 Perhaps due to having had little meaningful contact with others, Shinji has difficulty controlling his emotions and seeing nuance in them. In Episode 18 he fixates on saving the life of a single pilot when Bardiel could destroy many more people, and at certain points in End of Evangelion he shows a considerable anger and indifference, even wishing that everyone in the world would die.

Yet Shinji is also aware of his own faults to some extent, and can be gentle and compassionate. He is the only one of the pilots who questions why they are fighting the angels, and sometimes his justification for fleeing from piloting or for not taking action is to avoid hurting others. Shinji is also usually very polite.

Shinji has a nervous tic in which he often twitches or flexes his right hand when being thoughtful, nervous, or anticipating something. In early episodes he can often be seen plugged into his SDAT music player to shut out the world, though in Episode 25' he ignores its dead battery, a sign of his increased apathy. In Episode 15, Shinji mentions that he's been playing the cello since he was 5 years old, because "No one told me to stop". Despite his lack of enthusiasm, he apparently has some talent at it, according to Asuka.[5]

Shinji's Mental State at the End of the Story

Episode 25 and Episode 26 have Shinji feeling lost and begging for others to help him. Much of the TV ending is devoted to Shinji being taught by the other characters about the ability of individuals to make their own destiny by reshaping their viewpoint.

In Episode 26', Shinji chooses to reject Instrumentality for individual existence, even though it will be painful. He learned that he wanted real feelings even if he would be betrayed and hurt again, because fleeing from that reality brought him no happiness. This might suggest that, buried deep in Shinji, is the capacity for redemption and change.

In the final scene of The End of Evangelion, Shinji is surprised at seeing both Rei and Asuka alive before trying to strangle the latter. He had apparently been alone for some time before Asuka's return, and was nearly insane from isolation. The fact that he stopped strangling Asuka (and began sobbing at her caress), however, suggests that he's capable of returning to his true self.

See also: Final Scene in End of Evangelion#Passage of Time

In Episode 01, after seeing an a badly injured Rei, Shinji first repeats the phrase "I mustn't run away" ("Nigecha dameda!" in Japanese[6] ). This later becomes something of a catchphrase for Shinji -- though he only ever repeats it again in episodes #03 and #12 -- and a metaphor for his journey through the series as a whole. At several points, Shinji is noted by other characters to be "running away", or is urged not to run away, from unpleasantness, pain, and contact with others.

An instance of Shinji literally running away occurred during his visit to Yui's grave three years prior to the series beginning. Shinji also runs away from home in Episode 04, and tries to leave Tokyo-3 altogether in Episode 19. Notable instances of Shinji metaphorically running away include: going back to his room on encountering a crying Misato in Episode 21, and the accusations of the child Shinji and Rei in episodes #16 and #20 that Shinji has "run away" from his relationship with Gendo.

Theory and Analysis:Shinji and Asuka's Relationship