This is the home of things we'd rather forget (or, at least, whose origins are best forgotten). Not the same as List of Common Misconceptions, which are long standing and widespread fallacies, but concepts that make one say, "What were we thinking?"

In early 2005, long-time ANFer Magami No ER had been working on a Kaworu fanfiction and created a thread[1] for the purpose of exploring hypothetical questions. She planned to utilize the idea that Kaworu was a clone of Dr. Katsuragi, and, when pressed to give the man an actual name, Reichu proposed "Akira" (after Akira Ishida, Kaworu's seiyuu). About a year later, Reichu hijacked the thread[2] to rather messily peddle her complete conviction that a connection between Kaworu and the Doctor went far beyond fanfiction (see Revelations Incident). But, strangely, she referred to Dr. K. as "Akira" in most of her posts, claiming it was "as shorthand", and a couple of other forum members joined in. In addition to outright confusing people (to the point that "Akira" spread, entirely of his own accord, across multiple language versions of Wikipedia's NGE timeline article), it helped brand Reichu's various proposals and wacky ideas with the stigma of being elaborate "fanfiction" (as opposed to just lousy fanwankage). "Akira" eventually stopped appearing in serious posts, and Reichu properly partitioned him and most of the associated concepts into a fanfiction project that finally became realized in 2015, a full ten years after Magami No ER's first post[3].

Although "Akira" retained a blemish for quite some time, as of 2008 this has largely worn off, and "Akira Katsuragi" (as a fan-created elaboration upon Dr. Katsuragi) has an innocuous presence at EGF. He can be sighted in the Fandom subforum, its fanfiction spinoff and, occasionally, that awful IRC channel...although he had been largely forgotten in the meantime. (He's also mentioned on a handful of Spanish NGE pages whose owners apparently never realized that the ill-conceived Wikipedia edit was corrected years ago.) Akira has patiently waited for and seen through the release of the Rebuild of Evangelion movies without the mention of a canonical first name. Unless his name sneaked in as an Easter Egg somewhere in Evangelion: 3.0 + 1.0 or is set to be revealed in a story that covers the 14-year timeskip, it appears that he hasn't been assigned one. He continues to persist until a different canonical first name is finally assigned and threatens to, at long last, destroy him for good...or perhaps will be elevated to new heights with the even less likely reveal that Akira is his canonical name. Only time will tell.

The Spear of Longinus was Adam's S^2??

It was at one time a popular opinion that the Spear of Longinus either was or was made from Adam's S^2 Engine. [4] This notion always had its disbelievers, and the skepticism increased when the Extended OP became available with the release of Renewal. The clear shot of Adam being excavated while already impaled by the spear had been available all along in its "Rei Tank [5] version, but this clean shot drew a lot more attention. "Why", people wondered, "would the spear's natural state be a fork sticking out of Adam's back?" Finally the Classified Information came along and spiked this theory once and for all. Each seed was sent out accompanied by a spear that had a mind of its own, and a mission to immobilize any seed that acted contrary to its mission.

Right around Christmas 2005, Reichu woke up one morning convinced that the Gainax Gods had bestowed upon her the key to all of NGE's deepest mysteries — Evangelion was like a puzzle, and she at long last had the Solution in sight! She proceeded to bombard ANF with her "revelations", shattering the forum's extended period of dormancy with more posts than anyone could keep up with. This was all received fairly well … at first. Eventually, however, those annoyed with Reichu's increasingly bizarre ideas and escalating sense of dramatics began to mount, and a grand flame war (or something like one) broke out. The blaze, fortunately, snuffed itself out quickly. After a couple of months of madness, everything gradually began to return to normal, although it would take Reichu much longer to recover her reputation.

During the winter of 2005/2006, Reichu suffered from a sinus infection that, at its tail-end, yielded to a manic attack (for entirely unknown reasons). This effectively placed her in a state of elated delirium, wherein the mind was constantly racing with thoughts and sleep seemed remarkably unnecessary. Presumably with ample free time over the holidays, Reichu began to post on the ANF boards in one of the most intense attempts to analyse Neon Genesis Evangelion since its release.

The "Revelations" were largely contained in four original threads (and a fifth hijacked one) which were substantially interconnected with one another, and whose interconnection increased with time. The materials discussed were many and varied, ranging from the biology of souls in NGE to relationships between the characters to the mechanics of Third Impact.

At the time, Reichu heavily employed the techniques of Parallelism and You Never See Anything Just Once in order to make connections between what had previously thought to have been completely unrelated characters and concepts in NGE. Most of the connections were highly original and interesting, but somewhat lacking in hard evidence... As time wore on, the "Revelations" increasingly relied on earlier "Revelations" to support themselves. In addition, much of Reichu's earlier work had been left unfinished or incomplete as she moved on to the next topic, having reached a new "Revelation" in the meantime. Also throughout the discourse, Reichu continually proclaimed that NGE was about to be completely solved and that she was tantalisingly close to a completely consistent understanding of the show. ("Delusions of grandeur" are a symptom of mania.)

After approximately two months of a near continuous stream of "Revelations", by this time many of which were very weakly or not at all supported by the canon, the posters on ANF became disillusioned as Reichu continued to proselytize controversial theories such as Fem-Kaworu and ... her relation to Dr. "Akira" Katsuragi. With unending criticisms being laid upon her, a huge backlog of incomplete material to finish, and anti-manic medication finally taking effect, Reichu called a halt to the proceedings and declared an end to her "Revelations" threads.

The incident is recorded in some quarters as a flame war due to the arguments and criticisms which ensued. There was a general sense of disillusionment with Evangelion analysis following this incident, with some more recent forum members never fully recovering. The threads themselves, though they are chaotic and confusing to read, have been archived both for the historical record and because the "Revelations" threads are among the densest discussions in Eva geek fandom, with nigh every mystery, inconsistency and character discussed and connected within. Given their cabbalistic nature and eclectic content, it is possible that the "Revelations", though currently beyond our ken, may, like the Mrin Codex or other such texts, be understandable to us in the future, or they may contain hidden kernels of terrible truth that can only be disclosed though careful study or by minds touched in some profound way, e.g. by sinus infection. This is however, only an outside possibility. Newer initiates are advised to read the threads with some interest, but more so with caution.

At the height of her Revelations Madness, Reichu had the outstanding epiphany[6] that Kaworu is, in fact, a female. (I.e., despite the masculine secondary sexual characteristics, possesses a female reproductive system.) Naturally, Reichu's sanity was brought into question, and absolutely no one took this idea seriously, except for maybe a small handful of weirdos. Reichu eventually abandoned any hope of "fem-Kaworu", as Dr. Nick branded the beast, gaining acceptance. However, she couldn't quite let it go altogether, and subsequently she and Mr. Tines did their darnedest to spread word of fem-Kaworu (or "f-K" for short) and ensure that it would not be forgotten.

While decidedly a forced meme at first, at some point or another the denizens of EMF began to make references to it completely on their own, to the point that it became the veritable "Godwin's Law" of EMF: as BrikHaus' signature put it, "On EMF, as a thread becomes longer, the likelihood that fem-Kaworu will be mentioned increases exponentially." (Incidentally, the sig still says this, even though the forum has ceased to be EMF.) Fem-Kaworu has also been mentioned periodically on "THAT BOARD", though it seems to be considered more of an irritation than an in-joke. As of mid-2008, f-K made her first known appearance in an Eva fanfiction[7], which may yet serve as a vector for this terrible creature to truly spread beyond her native territory. OH THE HUMANITY!!!

"Fem-Kaworu" is commonly confused for more traditional female versions of the character (ones with T&A) or the omnipresent "Tabby-chan" (Tabris-XX), but they are far from the same thing.

A fictional character concocted by Tbozfan at AnimeNation Forums whom he used to answer all controversial questions. Whose soul is in Eva-00?: Sarai! Who shot Kaji?: Sarai! Who caused the Episode 11 blackout?: Sarai! While Tboz was just doing this to be a pain, some of the locals played along with the gag, and many who were actually there for it have never quite been able to forget.

The Tree of Life at Second Impact

The theory that the Tree of Life tried to form in Antarctica during Second Impact; it was originated by Shin-seiki.

One day, while watching Death, Shin-seiki noticed something curious: a group of wavy lines in the upper left hand corner of the screen as Adam's wings emerge. He checked, and this did not appear in the scene as originally presented in Episode 12, so he concluded that it had been added along with the red soul dots. He then took a closer look to try and figure out just what it was supposed to be. The more he looked, the more he thought that it looked like the twiggy end of the Tree of Life. When he posted this conclusion, some of the leading lights of AnimeNation and Eva Monkey Forums were incredulous at first, until Reichu compared a flipped version to a sketch of the Tree of Life from the Groundwork of Evangelion. She was convinced and became a champion of this theory. Most of the old timers (thewayneiac for example) then followed suit. Much accolades and back-pattings were directed at Shin-seiki for this important discovery.

Unfortunately, a party-pooper extraordinaire with the handle "Kaysow" proceeded to decisively demonstrate that what we were looking at was just a flaw in the cell, by posting screencaps of several other instances in Death where the same phenomenon occurs[8]. He posted about 20 or 30 examples, but two should suffice here. He also pointed out that it always occurred in either the first or last frame of a cut, and thus was probably a flaw in the splicing process.

Confronted with this evidence, Shin-seiki and various others were obliged to to say, "Never mind." This is probably for the best: the Tree of Life is impossible to explain in the first place, let alone what one was doing at Second Impact!

Note: Clicking to see the full-sized image is usually required to see what we're talking about. 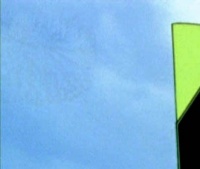 What? Even Shamshel can summon the tree?

Postscript: While moving the commentary to the new site, we were reminded of this shot from Episode 03. Had we remembered it at the time we could have been spared a good deal of embarrassment.