Difference between revisions of "Theory and Analysis:Final Scene in End of Evangelion" - EvaWiki - An Evangelion Wiki - EvaGeeks.org

Difference between revisions of "Theory and Analysis:Final Scene in End of Evangelion"

The final scene of End of Evangelion is, to this day, still hotly debated. It is a culmination of the story's themes and narrative in just a few, earth-shattering minutes, with Shinji's attempt to choke Asuka contrasted with her unexpected response. This article, however, will deal with the more objective aspects of this scene that can easily go unnoticed even to the most observant of viewers, thanks to its cryptic and deliberately ambiguous construction. There are, however, several details present in this scene that can help elucidate Shinji's state of mind.

Rust in Misato's cross. There also seems to be a Yebisu beer can in the top right.

"Mysterious" pieces of wood, with one of them broken in half

After rejecting Instrumentality, Shinji is seen emerging in the Sea of LCL. In the following scene, Shinji sees Rei, and seems shocked to see her there, and even more so when he realizes Asuka is there. As Shinji notices the girl, he moves towards her and begins to strangle her, without a clear reason. The generally accepted interpretation is that he was trying to determine whether she was real or if they were still experiencing Instrumentality.[1] Shinji's state of mind can seem a bit jarring, as he seemed content and willing to face the future just a few minutes earlier in the movie as he said goodbye to his mother Yui, even if he was still uncertain he could achieve happiness.

Instead, Shinji seems somewhat unstable and fraught, as attempting to strangle Asuka again seems like quite an extreme action. It is interesting to note that time inside Instrumentality itself is relative, and the sequences presented in the movie don't follow a completely linear fashion, thus, while Instrumentality itself takes less than an hour inside the movie, it is entirely possible that Shinji experienced weeks, months or even decades inside Instrumentality, and only returned to the real world much later, and might have spent some time alone in the beach before Asuka showed up, as some elements in the scene indicate:

It is still hard to pinpoint a specific timeframe, but Shinji would take at least a few hours to gather wood and erect the grave markers. Unlike the moon cycles, this is actually mentioned in the storyboards, so we can be certain at least this happened.

End of Evangelion has two discarded endings, Last A and Last B. While the Last B ending was far bleaker than the ending present in the final movie, Last A is still very similar to the one in EoE, with the most noticeable difference being Asuka's final line being altered.

Shinji resurfacing in the Sea of LCL. Note he looks much more solemn.

Asuka and Shinji laying on the beach.

Shinji when he gets a glimpse of Rei, and notices Asuka by his side. He is clearly surprised and disturbed, very different from his more calm look when emerging from Instrumentality.

Shinji, again surprised as Asuka caresses him. This seems to wake him up from his stupor.

Last A
You already know the beginning of this one (a beach, petrified headless Evas, etc).
Then, we see the graves Shinji made (it's stated by Anno it was _he_ who made them). The names of all main Eva characters are written on them, except for "Ayanami Rei".
We then see Asuka's grave.
And Asuka's foot kicking it to the ground. ^^;
(you can still see these graves in the actual ending... no names, but there is Misato's pendant nailed on one of them, and another has been kicked down ^^ )
We then see Shinji and Asuka on the beach... and you know that scene, too (but this draft demonstrates that Shinji and Asuka didn't just wake up there after Third Impact... they've been living here for some times... meaning they _could_ be the two only humans willing to return, after all... ^^; )
When Shinji starts crying, Asuka was supposed to say something like "Idiot No way I'll let you kill me" ("idiot" was removed in the storyboards... and the whole line was modified, eventually).[3]
Then, the ending music (so, there was one... ^^ ) was supposed to begin, and the staff credits were to appear (Anno suggests a horizontal scrolling, like in GunBuster, I guess).
We were to see Eva-01 lying on the Moon, and woman's hair showing from its broken mask (but her face remains unseen).
Behind Eva-01, you could see Earth, entirely red.
And the Black Moon, destroyed.
The camera goes to the sun, then to the stars.
Credits end.

Unlike Last B, Last A does not clash with the ending as present on EoE at all, except for Asuka's final line - changed when Anno asked for Yuko Miyamura's (Asuka's voice actress) suggestion, as he was still unsatisfied with this line, which lacks the ambiguity and duality of the final line.[4][5][6] However, the graves are still around, and the final storyboards still refer to them as such.[7][8] As such, adding to the evidence present above, it is also possible to extrapolate the meaning for these elements in the scene from Last A that are still present:

This has some implications as it contradicts other theories that Asuka merely materialized out of nowhere because Shinji willed it or because Rei somehow "gave" her to him as companionship, instead, she returned out of her own free will, which reinforces Yui's earlier statement about how anyone can come back, as long as they have the will to do so and to imagine themselves back in their original forms - although according to this[1], Asuka was the one Shinji had "hoped/wished for". However, the fact that Asuka imagines herself with her arm bandaged seems to indicate she is not completely healed yet, much like Shinji's fraught mental state does.

Nonetheless, the fact that she has chosen to lay by Shinji's side at her own initiative and chosen to react to him with open affection, instead of aggression and hostility like she has done many times before, symbolizes, at least, the beginning of her growth. Because Asuka is now able to accept herself, she is now able to accept him as well, instead of pushing him and other people away out of fear of intimacy and rejection, much like Shinji, unable to accept himself, ran away from people in order to avoid the pain inherent to human connections. Not only does this make Shinji stop as he has realized that it is indeed Asuka and he is indeed in real life, Shinji, who has realized he can find worth is himself and is now willing to reach out to other people,[11] is taken aback by this sign of compassion, which mirrors Yui's own caress a few minutes earlier in the movie as he leaving Instrumentality, it also shows how overwhelmed he is to be accepted himself, and might be ashamed of the way he has treated Asuka. 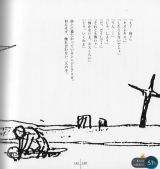 The final page from End of Evangelion Psalms compares Asuka and Shinji's choking scene to their kiss scene from Episode 15, by juxtaposing it with their dialogue. 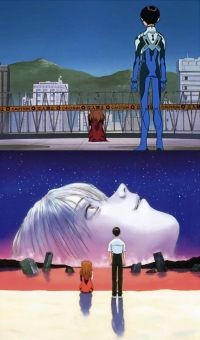 In Episode 22, above, Shinji is physically distant from Asuka, they are divided by a physical object, and Shinji is visibly tense as he is unable to comfort a visibly crying and furious Asuka. The poster for End of Evangelion directly parallels this scene, except that this time Asuka and Shinji are close to one another, and seem much more relaxed and at ease with each other, the barrier between them, physical and otherwise, gone. Perhaps a sign of better things to come.

Asuka's final line, "kimochi warui" can be translated as "I feel sick" or "How disgusting". It is an expression used many times before to express shock, discomfort or disapproval - for instance, when Shinji is first immersed in LCL in Episode 1 and in a sense embraced by Yui, and when Asuka complains about sharing a bathtub, and a house with Misato and Shinji in Episode 22, as she is unwilling to belong.[12][13] Because of its unclear meaning, it is hard to say whether she's referring to Shinji, herself, or soothing else. Asuka might be expressing disapproval at the situation they are in and Shinji acting meekly again. It might also be interpreted as how strange it feels for her to finally accept another person, something which so far has terrified her.[14] This does not change the fact, however, that she has just chosen to show him compassion, to give him a chance and lay by his side. When hostility would have been a far easier choice - and the fact that she has kicked her gravemarker implies she might not actually be in a frail and weak state as some assume, she has instead chosen comprehension and compassion, she took a risk, just like Shinji did by choosing to return to reality, as Asuka has. The ambivalence and duality in this scene represent the fact that they are not yet completely healthy and changed, but are beginning to open themselves to this change. The movie leaves open where they will go from there, if they can grow and learn to love themselves or not, but even after all the grievous death and destruction throughout the movie, and even though they are still only starting to grow, it still gives them this hope, as long as they pursue it. For better or worse, they at least now have each other.[15][16]

The fact that Asuka and Shinji will have to work in other to achieve happiness and even survival is reflected even in other ways: it could take a while before civilization can rebuild, if anyone even comes back in the first place, so they will inevitably have to deal with each other and at least come to terms with one another in other to survive: ultimately, whether Shinji and Asuka can grow and be happy also depends on whether the viewer thinks humanity can go back and learn from its mistakes - it is entirely possible that no one will come back, or that very few will. Much like Shinji and Asuka can grow and change, this also applies to humanity and even the world at large: it is impossible to even know for sure about the physical state of the world and its fauna and flora, availability of food and clean water, the preservation of buildings and infrastructure, etc. It is uncertain where they are, as well - possibly on the outskirts of the ruins of Tokyo-3, which has been flooded after Rei self-destroyed her Eva and later when the Black Moon emerged and created a crater. The physical damage might be limited to Tokyo-3's vicinity, or beyond, similarly to how Second Impact seems to have limited physical damage and LCL in the water to Antarctica.[17]

All possibilities are open: as Shinji has learned (and presumably Asuka as well), even if reality is harsh and uncomfortable, if he does not try to break out of the cycle of misery, despair and escapism which has encompassed him, he will only have the certainty of more failure and more suffering. However, if he decides to face reality and face the risk of rejection and failure, even if he will not have the certainty of success and attaining happiness, that is still the only way he can be happy in the first place.[18]

Theory and Analysis:Shinji and Asuka's Relationship - One More Final

Theory and Analysis:List of Common Misconceptions - The Adam & Eve Scenario

This article was mostly built out of the following forum threads, please refer to them:

Did Last A actually happen?